Cop Sees Kids Screaming For Their Dad. What He Does Next Leaves Their Mom In Tears 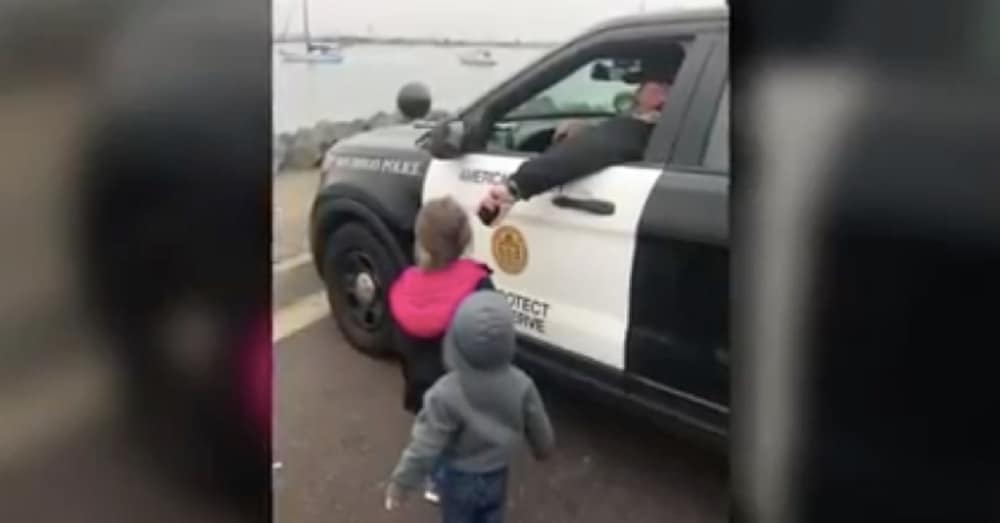 Their parents had been preparing them for this moment, but that didn’t make it any easier for Rileigh and Austin as they watched their dad sail away.

Their dad, Josh Buetow, is in the Navy and was leaving for his first deployment on the USS Carl Vinson.

As the ship began to pull away Rileigh and Austin screamed with all their might, trying to let their dad know how much they loved him and would miss him.

It was right around this time that Officer James Weaver pulled up. He had been watching the kids from his patrol car and knew that, since he could barely hear them, there was no way their father could.

That’s when he came up with a brilliant idea. He asked the kids if they would like to use his PA system to broadcast their goodbyes to their dad.

The kids eagerly jumped at the chance and began to call out their messages of love for their dad.

The kids’ mom, Brettany, was overcome by the officer’s act of kindness.

“It meant a lot to us,” she said. “I was holding it together pretty well until he asked them if they wanted to [use his PA system], and I just slowly broke down and started crying.”

As for Officer Weaver, he’s surprised his kind act is getting any attention at all.

“I just thought I’d come over and try and let a couple of kids say bye to their dad,” he said.

To Weaver it may have just been a normal day on the job, but to these kids it meant everything.

It doesn’t make their dad’s absence any easier, but at least they know he is carrying their love and support with him as they eagerly await his return this summer.

Were you touched by what Officer Weaver did for Rileigh and Austin? So share this!