Cop Responds To Shoplifting Call But Knows There’s Something ‘Off.’ His Response Is Brilliant 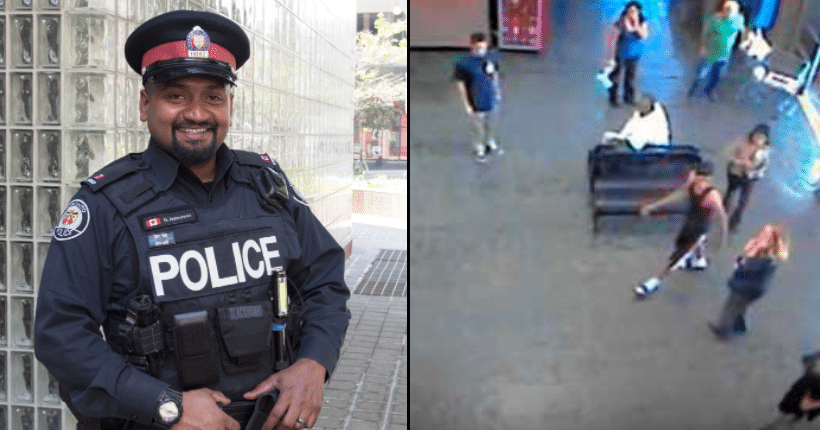 When police officers attend an incident, they must always use discretion. Was a crime actually committed? According to at least one individual, an offense did occur; but for the suspected defendant, there are usually reasons behind the misconduct. Sometimes, the one caught doing wrong is very remorseful. The responding officer must decide what should be done.

Recently in Toronto, a constable on duty received a call from a local Walmart where a teenager had allegedly attempted to steal a long-sleeved shirt, a pair of socks, and a tie.

Constable Niran Jeyanesan arrived and, after listening carefully to both sides, decided criminal charges shouldn’t be filed. Rather, the case merited charges of a different sort: credit card charges.

Jeyanesan knew the items the 18-year-old had targeted weren’t typical for thieves. He wanted to dig a little deeper and find the cause for this teen’s actions.

Jeyanesan learned the young man’s father – the primary breadwinner – had fallen ill and the family had lost their home. The teen wanted to find a job to help his family’s financial situation and had secured an interview for a position in the service industry, but didn’t have the right clothing for the interview. Desperate, he decided to steal them.

Jeyanesan’s heart went out to the remorseful teen and he decided to purchase the items for him. He wasn’t rewarding the behavior of a hardened criminal – he was helping a young man down on his luck get a job.

“He was very remorseful, very ashamed,” Jeyanesan said of the teen. “I could see that this is truly a mistake and this person wanted a chance at life.”

The constable noted how important it is to get everyone’s side of the story while at a scene: “We try to get everybody’s story when we attend calls,” he said. “Everyone has their battles that they’re fighting. It doesn’t excuse them, but behind every action, there’s a reason why this person is doing it.”

While other officers transported the teen to the police station for further questioning, Jeyanesan went into the Walmart and searched for the merchandise the teen had tried to steal. He couldn’t find the correct sizes, so Jeyanesan asked the manager to hand over the original pieces the young man snatched.

In the end, Jeyanesan spent about $40 on the tie and shirt (he opted to disregard the socks); but in reality, he gave so much more to this young man. He gave him a chance to improve his life situation and help his family.

The teen left the police station soon after with his belongings and the new clothes the constable purchased for him. If Jeyanesan would have filed charges, the young man wouldn’t have gotten the job he so desperately needed. Thanks to this constable, the teen was able to make an effort to provide for his family.

“He understood the importance of what happened, that this could easily be seen as a crossroads in this young man’s life, and took the very commendable decision to assist in the way he did,” Pugash said.

The work of an excellent police officer is never finished. They must use keen judgment and never draw quick conclusions about a person’s actions. A good cop never lets the badge give them a power trip. It’s a shield they’ve earned and ought to take great pride in wearing. They’re in their communities to serve.

We’re so pleased this constable responded with compassion and good character. That’s what we need more of in this world!

Were you touched by what Constable Jeyanesan did for this teen? So share this!