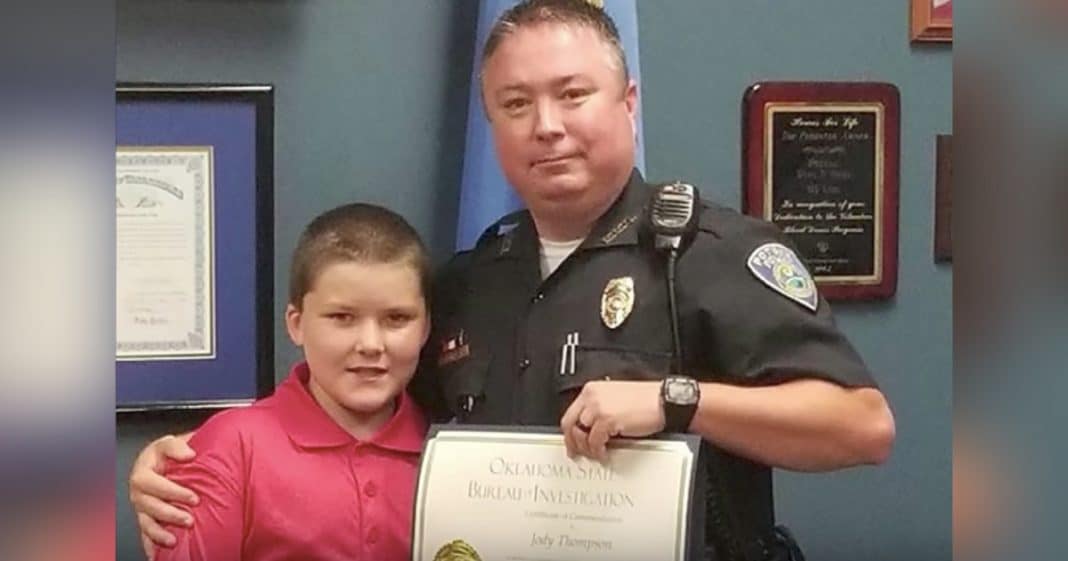 Every day we are tested. Decisions are placed in our path and we need to determine the right thing to do.

Sometimes, those who do what’s best for others are seen as heroes when, in truth, they weren’t looking for accolades or recognition. They just saw a need and acted responsibly and correctly.

Oklahoma police officer Jody Thompson answered a call one evening that would forever change his life and that of his family.

When he arrived at the scene, a home where claims of child abuse were reported, he found John, an 8-year-old little boy. John was soaking wet, his hands and feet were bound, and the little guy’s belly was empty after not being fed for some time.

John’s parents are thought to have forcibly held him beneath the shower and submerged him in a trash can.

When Officer Thompson saw John, his heart broke. What he did next went above and beyond his official duty.

After removing the little boy from his parents and their home, Thompson took John to the hospital. He never left the boy’s side.

But then he took things one step further.

Thompson knew the foster care system isn’t always good to every child. Many slip through the cracks and never find loving homes where they feel safe and secure. Thompson knew John could face a terrible future, so he and his wife decided to do something stunning – they adopted the little boy.

Two years on, John is now 10 and thriving with his new family. The Thompson’s generosity knows no bounds. When Officer Thompson learned that John had a new baby sister who had been born in prison, he and his wife didn’t hesitate to adopt her as well. She was brought to their home when she was just one day old.

The Chief of Police has commended Officer Thompson and his actions and said he wants the entire community to know of his officer’s selflessness.

As we face difficult decisions, it might not always be easy to do what’s right, but remembering to put others and their welfare before ourselves isn’t difficult. We must slow down and think before we speak and act.

Circumstances could have been much worse for both John and his little sister. Thankfully, both of these children will grow up in a loving home with parents who will give them the best values and life lessons we all must learn.

Were you touched by what Officer Thompson did for this little boy in need? So share this!