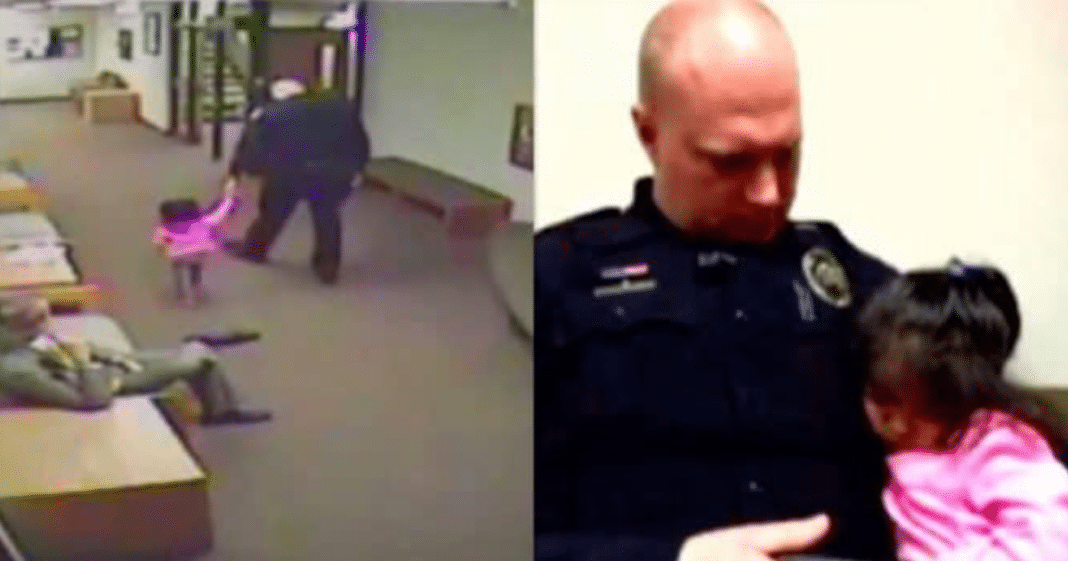 Police officers aren’t just out to make arrests and hand out tickets. They are there for home and medical emergencies. Cops are human beings too; many of them have families and children of their own. One officer observed a fellow parent in a sticky situation. He stepped in and saved the day.

In Orem, Utah, at the Utah County Court House, Jose Moncayo was to appear for a previous traffic ticket he received. Abi is his 2-year-old daughter. The father had to bring his little girl to court with him. Courthouses aren’t usually a place for small children, but he wasn’t able to find a babysitter.

Jose and Abi waited outside the courtroom; Abi ran about the halls and entryway of the courthouse, making the building her play area. When it was time for Jose to see the judge, he quickly realized he had a problem on his hands.

He wasn’t allowed to bring Abi into court with him. Jose didn’t show up with anyone to watch his baby girl. The father couldn’t very well leave his daughter alone in the hallway. An unexpected hero came to his rescue.

Officer Kevin Norris of the Orem Police department was also at the courthouse to provide his testimony. He’d been watching the father and daughter all along; he offered to babysit little Abi.

Officer Norris explains why he stepped in to help: “I’ve got kids myself.

“I know what it is to have rambunctious kids, and it’s hard to take them anywhere.”

To occupy Abi, Officer Norris held the little girl’s hand while he escorted her around the courthouse. He made sure she had enough water; and with the help of other deputies, they even found a treat or two.

With all the excitement, Abi finally ran low on energy. Officer Norris pulled up some cartoons on his iPhone. It didn’t take long for Abi to trust the kindly officer. She climbed onto his lap and leaned her head against him. When Jose emerged from the courtroom, he found her asleep in Norris’s arms.

If you need more evidence to prove how much cops care about the members of their community, look no further than little Abi’s story: “We’re not just officers who are out there to arrest people,” Officer Norris shared. “We’re out there to make our community a better place.”

Officer Norris might not realize what a difference his kind gesture does for those in need. It’s heartwarming when we show compassion and care to others. Abi might not remember the proper officer who kept her busy during one afternoon, but Jose certainly won’t forget. Norris’s generosity.