Cop Find Kitten Huddled Under Lamp Post. What Sergeant Does Next Will Melt Your Heart 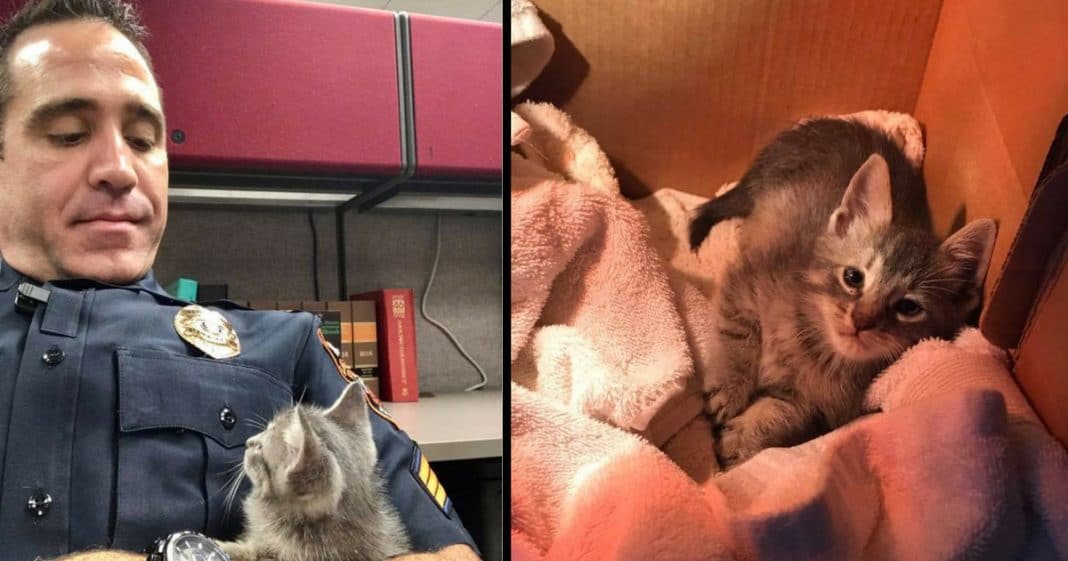 When we think of police officers we think of people who are tough and strong and can take on the bad guys – and that’s exactly what we want them to be – but we always love it when we see a softer side to these men and women in blue!

That’s exactly what happened in Lakeland, Florida, recently when one police officer found a tiny kitten while on patrol and brought her back to the station.

Officer Mike Cardin had just started his evening shift with the Lakeland Police Department and was out on traffic duty when he got a call about a tiny kitten that was wandering all alone near a busy intersection.

He went to check it out and, sure enough, he found a tiny kitten huddled up under a lamp post all alone and very scared. Thankfully he was able to catch the kitten and he took her back to the station.

First, he put her in a kennel, but it was much too big for her and she kept escaping, so he fashioned a cozy little spot for her in a cardboard box so she could be comfortable and safe until animal control came to pick her up in the morning.

Before animal control could come, though, Sergeant Brian Wallace came in for his shift, and as soon as he saw the tiny kitten his heart was captured.

At first he just planned to keep her company while she waited to be picked up, but the more time he spent with her the more in love with her he fell. He scooped the tiny kitten up and held her in his arms while he got to work.

“I got to the station just after Cardin had secured her and went to check on her,” he said. “Here she was, alone and frightened. Since this was not too long after the beginning of the shift, I just couldn’t leave her in that box for about 10 more hours, just to have animal control take her away.”

Wallace even took the kitten on patrol with him!

“I took the box she was originally put in and placed it in the passenger seat of my patrol vehicle, facing me,” he said. “That’s where she stayed for the rest of the night … and didn’t seem to mind, I might add.”

In a post on the police department’s Facebook page, they said the kitten “seemed to take to her new role as partner to Sgt Wallace, however, she did fall asleep her first night on the job.”

By the end of his shift, Sgt. Wallace knew he had just added another member to his family.

He named the tiny kitten Kelsey and took her home.

We’re glad Kelsey has found a new, loving home with Sgt. Wallace! It’s clear this adorable kitten already has this officer of the law wrapped around her tiny paw, and we know he will give her all the love and attention she deserves!

Did you love seeing how Sgt. Wallace bonded with this sweet kitten? So share this!