Contractor Scams Disabled Vet Out Of $17k. What These Strangers Do Next Leaves Him In Tears 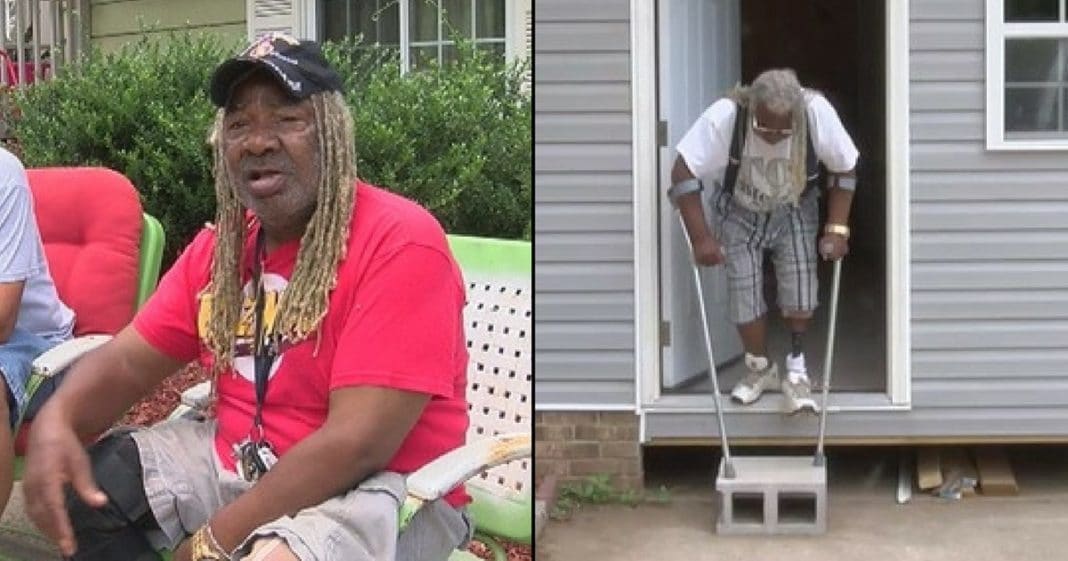 Our veterans have sacrificed so much for us and for our country. They don’t just deserve our respect – they deserve the highest praise and honor.

Purple Heart recipient Ronald Eason is one of these veterans. He has a prosthetic leg and numerous other health issues, and recently he was diagnosed with lung cancer. His wife, Delinda Eason, has to take him to the doctor almost every day.

Ronald has difficulty getting around, especially when it comes to stairs, so the couple decided to convert their garage into a bedroom and bathroom that will be easier for him to use.

The Charlotte, North Carolina, couple hired Queen Bee Remodeling to do the work for $17,000 and were looking forward to having the remodel finished so Ronald would be comfortable while he undergoes treatments for his cancer.

You would think someone would see this veteran in need a show compassion, but when Queen Bee owner Selina Piazza looked at Ronald, she saw a target. She ended up walking off with $12,000 of the couple’s money, as well as the materials for the remodel (which were supposed to be included, but they had purchased).

“I gave her $8,000 that first week, that was the week of June 1,” Delinda recalled. “A month later when she came back over here to start working she said she didn’t have any money – she has to use it for this and that and she had to pay off all her workers. It was at this point we gave her another $5,000.”

The couple was left shocked, hurt, and confused. Not only had Piazza swindled them, but they were going to have to figure out a way to get the money together to finish the job.

“Because I’m used to having at least two, three thousand dollars on me without even any problem, and now I can’t have nothing on me and it hurts. And it hurts,” Ronald said.

Thankfully, though, there are good-hearted people out there, and when they heard the Eason’s story, many reached out and said they wanted to help.

Purple Heart Homes, an organization that helps remodel homes for disabled veterans to help with accessibility and safety, said they would come in and make the Eason’s home more accessible for Ronald – free of charge.

“A lot of us are veterans on our staff. We have a lot of spouses of veterans, dependents of veterans that are part of our team. So, I mean, it’s like another person like us, that’s who we’re talking to on the phone. So, it’s helping one of our own,” said Purple Heart Homes co-founder Dale Beatty.

Contractor Scott LaClaire has come in to do the work, but says he has had to fix a lot of shoddy work that was haphazardly done by Piazza before she took the money and ran. He has had to fix drainage issues in the bathroom, drywall the entire room, and fix some electrical issues that could have caused a fire – something that would have been deadly for Ronald as it would have been difficult for him to escape the house.

“It’s been one thing after another. I’ve busted my rump to get it right for them. How can you not?” Scott said.

“One word explains it, my friend,” he added. “Disaster.”

The Easons have filed police reports against Piazza, but she has operated her company under more than six names and police are still working on tracking her down. If she is caught, she could be facing charges of swindling and theft.

In the meantime, Ronald is just focusing on the future. While he feels down when he thinks about what happened, he said he has forgiven Piazza and has been blessed by the kindness so many have shown.

“I’ve survived more than that before so I know I can survive this,” the tough vet said.

Ronald recently underwent surgery to treat his lung cancer and his recovering in the hospital. While he has been out, volunteers have worked to finish the ramp into his house and have moved all of their furniture in so he can be comfortable when he returns. He is looking forward to getting home as soon as possible.

While our hearts break at the thought of someone being so cruel as to take advantage of a disabled veteran, we have been touched to see the outpouring of love and support that has come in from the Eason’s community and from others all over the world.

Hopefully, police will be able to catch Piazza soon. In the meantime, the Easons are just happy to be going home.

Were you touched by the way so many people came to this veteran’s aid? So share this!