Construction Worker Saves Baby Deer From Falling Tree, But When He Tries To Send Him Home…Holy Moly! 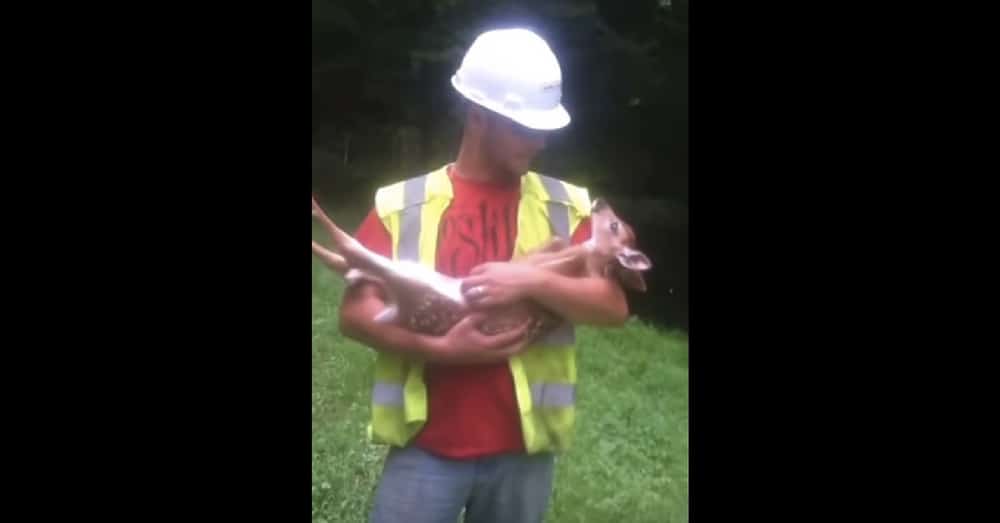 It was a typical day of felling trees for Kentucky power line worker Justin Lewis. He and his partner were working away clearing the way for electric lines when they noticed a baby deer trapped right in the fall path.

Justin picked the fawn up to move him out of the way, and then started cuddling the sweet baby and rubbing his belly.

But it turned out the deer liked the cuddle session a little too much!

“My buddy and I were clearing a right of way for the electric lines and came across this fawn trapped in the fall path of the tree we were about to trim,” Justin explained. “He was tangled in some thorns and was pretty shaken up after we cut him loose, so we started rubbing his belly to calm him down…. which worked a little too well, as you can see.”

“Now when we go put it down, it freaks out until we start rubbing its belly again.”

The fawn was probably scared without its mother and felt safe in the arms of the power line workers. He didn’t want to leave them!

The video of the adorable encounter quickly went viral, but reactions to it were mixed.

Some were concerned for the deer’s well-being and warned that if the baby got reunited with his mother she would be suspicious of the human scent on him, while others pointed out that the fawn would have died if Justin and his partner hadn’t moved him.

Justin noted that the fawn followed them around the job site for about an hour “like a lost puppy,” but then the workers noticed a doe watching them from a nearby hillside. Assuming she was the fawn’s mother, Justin carried the baby about halfway up the hill and put him down. The fawn then ran straight to the doe and they walked away together.

A happy ending for all!

The Humane Society warns that humans should stay away from baby wild animals (and all wild animals) unless absolutely necessary. “If you have already handled a fawn,” they said, “take a towel, rub it in the grass, and then wipe down the fawn to remove all human scent. Then return the fawn to the place where you found him.”

Did you find this fawn’s reaction to being put down as sweet as we did? So share this!