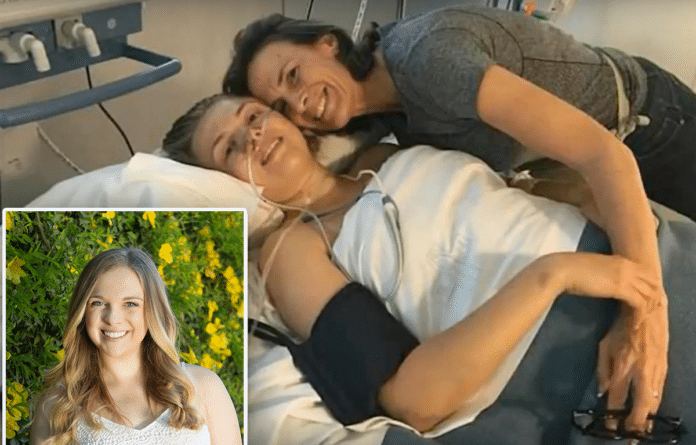 Excited to explore Europe, University of Arizona student, Kara Dunn traveled to Spain. She saw the sights in the capital, Barcelona, then went to Seville. A little less than a week had gone by, and she was ready to see more. That’s when she started experiencing a tingling sensation in her teeth, arms, and legs. Dunn thought she could sleep it off, but the next morning, she couldn’t move.

She awoke to find that her face was paralyzed and she had double-vision. Rushed to the hospital, she soon found out that she had a rare autoimmune disorder: Guillain-Barré Syndrome (GBS). Her immune system had started attacking her nerves. The cause is unknown but is often preceded by an infectious illness like the stomach flu.

Her friends back home were shocked and could only wait for news from afar:

“It’s hard hearing that one of your best friends has such a rare and harmful disorder and you can’t even be there with her,” said Dunn’s roommate Sarah Schwyhart.

Her brother Ryan said that the hospital had sedated and intubated his sister for severe pneumonia, which had complicated the condition.

Fortunately, most people who develop the disorder recover, but the recovery can take months or longer, and some people retain lingering symptoms. Kara couldn’t stay stranded in Spain for a full recovery. She would have to be air evacuated all the way back to Arizona.

Although her insurance might cover the cost of the emergency flight, out-of-pocket medical expenses, physical therapy and transportation/housing for the family would skyrocket to $100,000.

Ryan set up a GoFundMe page to help get his sister back home.

“All we want is for Kara to be able to come home and get the best treatment available so she can regain her strength.”

In just eight days, the GoFundMe page has gathered $99,220 of the $100,000 goal. According to the post, unused funds will be donated for autoimmune and neurological illnesses like Guillain-Barré Syndrome research.

UDATE: Thanks to all the help from GoFundMe, Kara was able to fly back home to receive treatment in Phoenix.

Positive update on Kara Dunn, the UA student paralyzed during her trip to Spain, via her GoFundMe page. (Link: https://t.co/KtGlyUBR75) pic.twitter.com/zlwqXMOALV

See a “Thank you” message from Kara posted to YouTube below:

Josh Eberly - March 30, 2020
There is a famous book titled "Love in the Time of Cholera," which brings me to our alternative title: More specifically, the virtual bar...