Classmates Mock Boy Who Shaved Head For Cancer, But What Principal Does Next Leaves Them At A Loss For Words 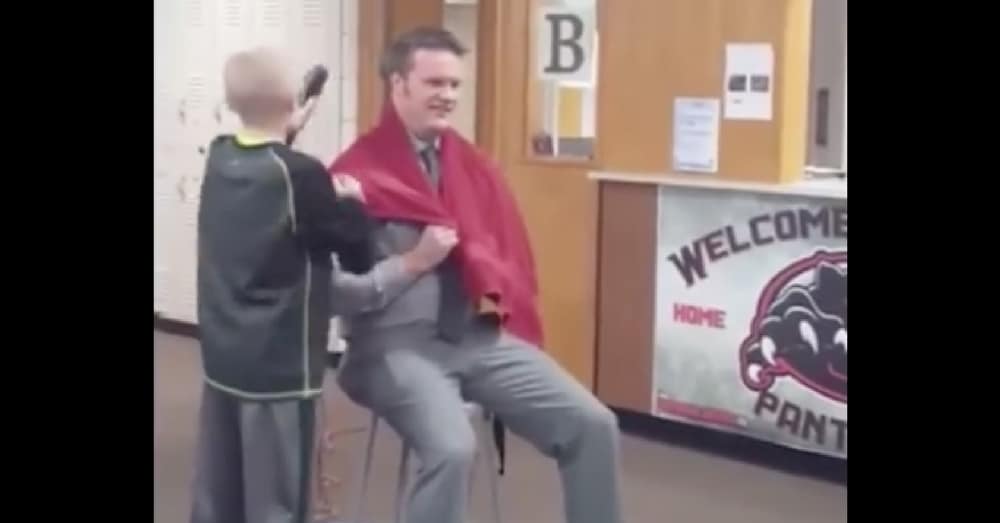 When Jackson Johnson found out his grandfather, Papa Rick, had been diagnosed with Mantle cell lymphoma, he was devastated. The cancer, which affects blood cells and lymph nodes, is incurable.

Despite it being an incurable disease, though, Papa Rick decided to undergo an eight-month chemotherapy treatment and stem cell transplant to help prolong his life and his time with his family.

“[He] thought it would be an outward sign that he had cancer and that everyone he saw would be thinking, ‘Poor Rick,’ and he was just dreading that,” his daughter and Jackson’s mom, Amber Johnson said.

Knowing that his grandfather was nervous, Jackson decided to show his support by shaving his own beloved blonde locks off.

“Jackson shaving his head for Papa was letting him know that, ‘I can’t do much to help you, Papa, I am only 11, but you won’t be alone,’” Amber said.

When Papa Rick saw Jackson’s shaved head Amber said you could see the joy return to his face.

Unfortunately, though, Jackson did not receive the same reaction from his classmates.

When Amber heard about what these boys had said she called Jackson’s principal, Tim Hadley.

Tim knew the mean classmates needed to be taught a lesson, but he wanted to come up with a creative form of discipline so they would understand why their actions were so wrong and learn to treat others better in the future.

As he laid in bed that night an idea struck him and he texted Amber and asked her to bring the clippers she used to cut Jackson’s hair to the school the next day.

“I thought I could have a one-time conversation with a couple of kids or I could impact a generation,” Tim said. “I think a leader is someone who knows, someone who goes and someone who shows, and I needed to show the way.”

At 9:00 a.m. he gathered the entire middle school together and then called Jackson up to the front. He then handed him the clippers and told him to shave his head.

“You never know what someone else is going through,” Tim told the kids. “What they have may look so perfect on Facebook and Instagram, but inside they could be broken, so before you make a comment and pass that judgment, stop and think about what might be behind the obvious.”

The lesson worked. Afterward the classmates who had bullied Jackson came up to him and apologized completely on their own!

When Papa Rick heard the story his spirits were lifted. He and the entire family have since been blown away by people who have reached out to tell them how their story has impacted them. One woman with cancer decided she would stop wearing her wig and a little boy in third grade decided he would shave his head as well.

Our kids need more people like Principal Tim who will stand up and demonstrate what true leadership and kindness looks like!

Do you applaud what this principal did for Jackson? So share this!