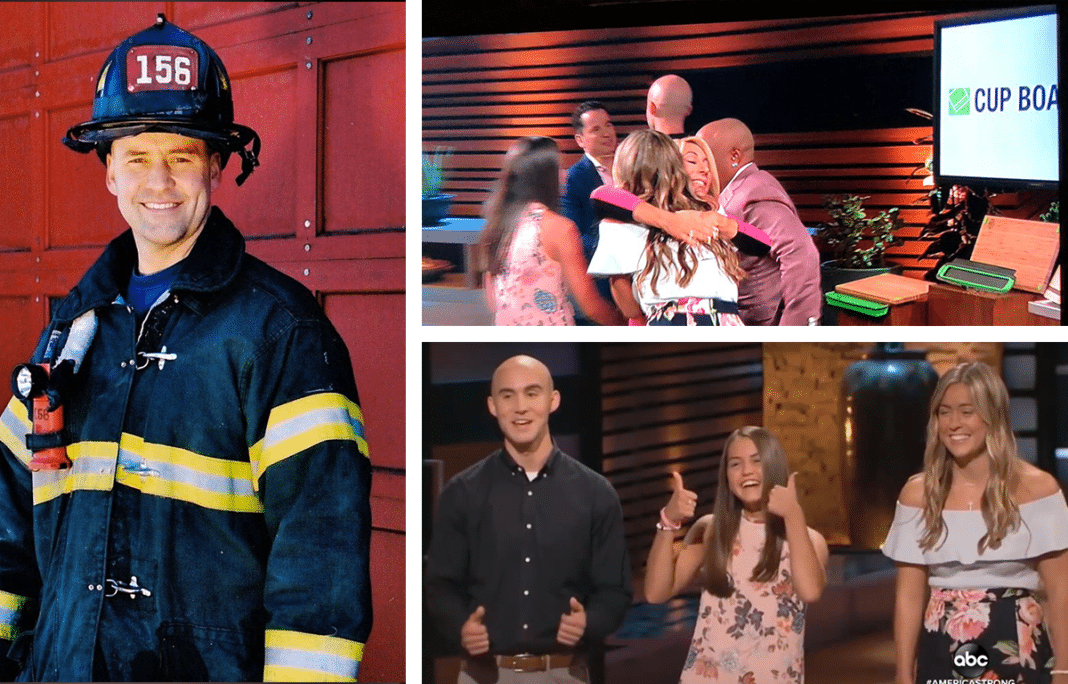 If you’re a fan of the hit show, “Shark Tank,” then you know it’s all about inventors pitching their ideas to a room of hungry “Sharks” who can decide to bite and fund the project, or say, “I’m out.” In what is the most emotional Shark Tank we’ve seen, three siblings walked into the tank and gave the pitch of their lives for their beloved dad, a chef, inventor, and New York City firefighter. He recently died from cancer due to exposure to debris at Ground Zero after the 9/11 terrorist attack.

Kaley, Keira, and Christian Young wanted to fulfill their dad, Keith’s dying wish. Keith Young wanted to pitch his invention, the Cup Board Pro, on Shark Tank. He was a two-time champion on Food Network’s Chopped, but he passed away before he could make it to Shark Tank just three months ago.

“We were only able to be here because of how strong our parents were,” said Kaley.

Keith was not only there in spirit, but he also appeared on video. Before he passed away, Keith recorded his own promo for his invention. It’s a all-in-one cutting board that helps collect and separate chopped food in a mess-free way.

The Sharks heard the story about heroic Keith, his tragic passing, and also the death of the Young children’s mother Beth. The kids also lost their mother recently when she died of breast cancer. Hearing all this, the generally down-to-business Sharks were in tears. The five Sharks were also about to make maybe the best offer ever on Shark Tank.

“Rather than fight it out, we decided to work together,” said Mark Cuban. “Each one of us is going to contribute 20,000 dollars, and so any profits that we earn from our 20 percent, we’re going to contribute to whatever charity your dad supported to firemen that have been sick from 9/11.”

This Youngs’ reaction is beautiful, as they exchange hugs with the Sharks. Even more beautiful, the family gave an update that demand has been so overwhelming for their dad’s invention that they sold out immediately. Now they have over one million in back-orders. The kids hope to fulfill Keith’s dream to have the Cup Board Pro in every kitchen in America, and it seems they just might.

“I hope that it inspires people to keep dreaming,” Kaley says.

“And to remember how important family and friends are, and that love is really the most important thing at the end of the day.”

Not only that but the Young family has also started a GoFundMe page to raise money for the FDNY Foundation for the New York City Fire Department. The money will go to the Fired Up for a Cure initiative, which partners with the American Cancer Society. They aim to permanently support cancer awareness, prevention, and research for first responders, civilians, and their families who are diagnosed with cancer.

Following the show, the Sharks commented on the experience on Twitter:

Amazing. #CupboardPro entrepreneurs have a million reasons to be proud. #SharkTank

The outpouring of support for this special family has been incredible! Kaley, Christian & Keira Young brought their late father’s dream to life last Sunday when they pitched his product #CupBoardPro on @ABCSharkTank. pic.twitter.com/96PMl3SA5b

WOW. Just wow. Talk about a real hero. A tragic story, but I know Keith is looking down beaming with pride. #cupboardpro #SharkTank

Mark Cuban retweeted the moment that the Sharks all cried.

A deal with all five sharks and not a dry eye in the tank. #SharkTank pic.twitter.com/gxHhwfEND2

It has been incredible getting to know the Young family. Their determination to bring their father's vision to life is incredibly inspiring. Honored to work with the @ABCSharkTank Sharks to help ensure #CupBoardPro finds its way into kitchens everywhere. #SharkTank pic.twitter.com/Iwabkis3Ee