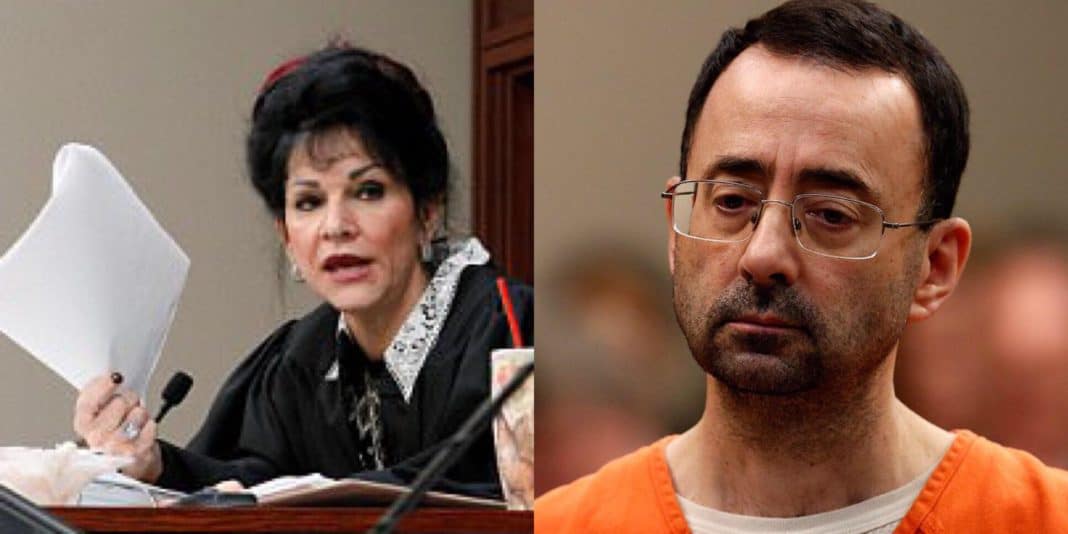 Dr. Larry Nassar has pled guilty to child pornography charges and has been sentenced to 60 years behind bars. In his current sentencing trial, 54-year-old Nassar, when all is said and done, will have been confronted by over 100 women whom he sexually abused and victimized over the years.

On Thursday, Nassar wrote a single-spaced 6-page letter to County Court Judge Rosemarie Aquilina. In it, the former doctor for USA Gymnastics complained how difficult it is for him to sit and listen to women’s stories of the abuse he forced them to endure under the guise of medical treatment. Nassar accused the judge of turning his sentencing trial into a media frenzy and how she put herself in the spotlight.

“Now this is entertaining to me,” County Court Judge Rosemarie Aquilina said as she read from the letter in court on Thursday.

“‘Aquilina said if I pass out she’ll have the EMTs revive me and prop me up in the witness box.'”

To which the judge scoffed: “I suspect you have watched too much television,” Aquilina said. “It’s delusional. You need to talk about these issues with a therapist, and that’s not me.”

Nassar has again pled guilty; this time to molesting seven girls. Per the terms of his plea agreement, all his accusers can provide impact statements. So far, over 100 have signed up to either read their statement aloud or have it read on their behalf. These courageous young women stand at a podium, sobbing and overcome with emotion as they confront Nassar.

The defendant keeps his eyes downcast; he sometimes shakes or weeps, and his head remains lowered. After each statement, the judge heaps scorn on Nassar by consoling and applauding each woman. She’s vowed she’ll impose a sentence on the now disgraced doctor that’s so severe; he’ll die in prison.

The judge read excerpts from Nassar’s letter. Regarding his accusations that she wanted the media there, she said: “I didn’t ask any media to be here,” she said.

The next issue Nassar had with the proceedings was how she was allowing more than the seven original women he pled guilty to abusing provide impact statements. Again, the judge wasn’t having it: “Aquilina is allowing them all to talk,” he wrote. “She wants me to sit in the witness box next to  her for all four days so the media cameras will be directed at her.”

The judge again shot Nassar’s complain down with the truth: “I don’t have a dog in this fight, sir,” she said, adding, “I didn’t want even one victim to lose their voice.

“Spending four or five days listening to them is significantly minor considering the hours of  pleasure you had at their expense and ruining their lives.”

In the letter, Nassar also mentioned he passed out twice before his federal sentencing on child pornography charges. This is where he received the 60-year prison sentence.

To this, the judge said: “I’m sorry about that, sir. I wish you well.”

She pointed out why he was seated in the witness box: “not for my entertainment, quite honestly, [but] so that  your victims can face you in the eye without turning back constantly.”

She cited his prior fainting episodes: “I could not have you with a heart condition standing for four days. That would be cruel and unusual punishment.”

For the lack of remorse Nassar has shown during these court proceedings, I doubt many would find compassion for a man who willingly abused so many girls. Now that he has to face the music, he can’t handle it.

The judge cut Wednesday’s court session short to recommend Nassar meet with mental health professionals. When asked if they’d offered suggestions for accommodations, Nassar said they had not.

Nasar’s legal trials aren’t over. This hearing could go into next week. Five more women have come forward, wishing to give impact statements. He could be sentenced as early as next week. Nassar is also facing another sentencing hearing for pleading guilty to abusing three more girls in the county.

What a disgusting excuse for a human being. Nassar used his power and position to take advantage of young girls; to break the complete trust they, and their families had in him merely because he was a professional responsible for their physical wellbeing. Shame on those who kept the abuse hidden. Like a dirty secret swept under the rug, these people are just as guilty as Nassar for their role in staying silent.