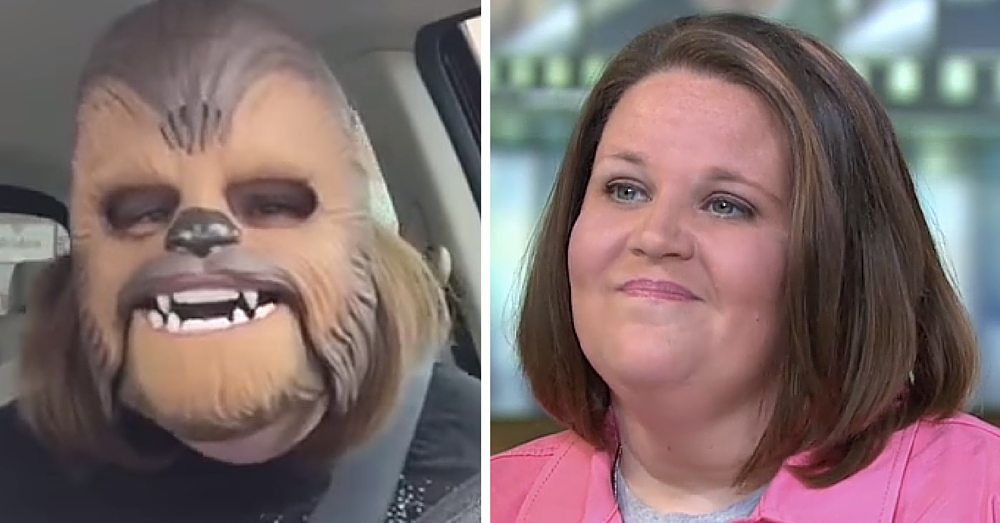 When Candace Payne decided to take a quick video of herself trying out her latest purchase – a roaring Chewbacca mask – she had no idea she was about to become an Internet sensation. Within hours, though, her video had gone viral, and it quickly became the most-watched Facebook live video ever, receiving over 138 million views as of this writing!

Payne’s newfound fame landed her a spot on “Good Morning America” where she spoke with Robin Roberts about the video, her love of Star Wars, and the best things that have come out of her viral sensation.

She admitted that she had first gone into Kohl’s, where she bought the mask, for some yoga pants. “I’m trying to work out more. And it’s not really going that well,” she laughed, so she ended up “going to the toy section because I got discouraged about the yoga pants and I thought, ‘Maybe not today. But I can get a toy for my kids.’”

It was there that she accidentally bumped into the “Chewie” mask, heard it growl, and decided, “I need to get that. Like, I don’t think my kids need that, I think I need that.”

Payne and her family have received lots of Star Wars toys and other gifts since the video went viral, and while that’s nice, Payne said the best part about her video going viral is “being able to share joy with people.”

“In all honestly, I think the world as a whole is in need of a good laugh” she said. “I think we’re in need of somebody to lift our spirits, to not take ourselves so seriously, and to maybe break some cynicism worldwide… somebody needs to have a good belly laugh with somebody, and it happened to be me that day.”

She said she’s been blessed by the stories she’s heard from people who have been touched by her video. Some have told her that seeing her joy helped them come out of depression, and she had “one lady message me and tell me she has an autistic daughter that hadn’t laughed in two months, and she said every time she showed her the video, she laughed and laughed. And from one mama’s heart to another mama, to see a child laugh that you haven’t seen laugh, those are the stories I will take with me every day.”

It’s hard to say whether Payne’s fame will be of the “15 minutes” kind or if it will endure, but one thing is for sure – she has brought joy and laughter to millions, and that in itself is enough.

Were you touched in any way by Payne’s video or her interview? So share this!