Cat Dumped In Desert With Sign Duct-Taped To Fur, Rescuer Sees 2 Words That Break Her Heart In Two 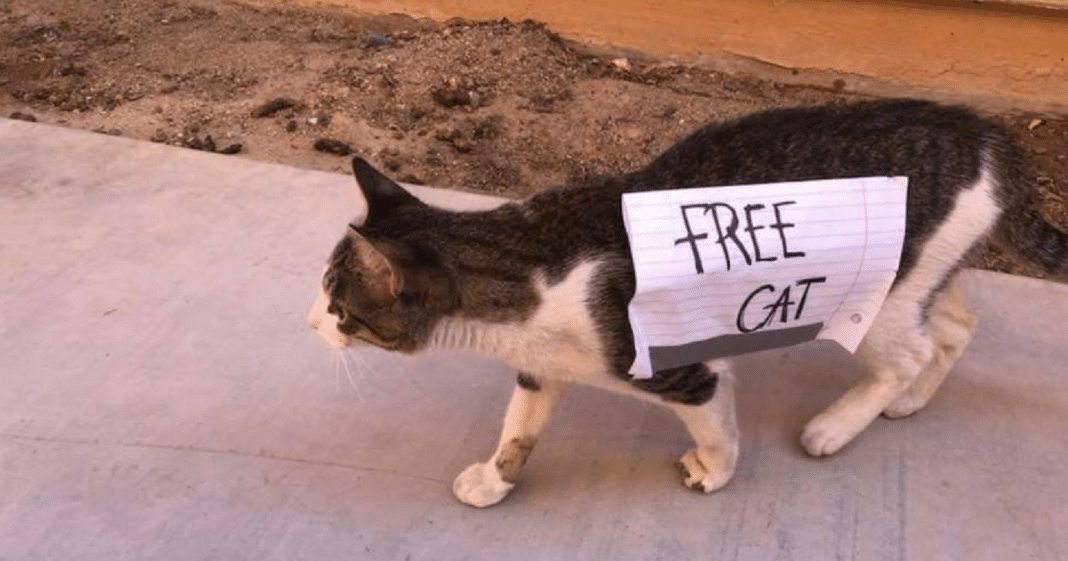 It’s heartbreaking when we hear stories about innocent animals being abused by horrible humans. Fortunately, most people see the beauty in these beautiful creatures that we get to share our planet with.

One woman from Arizona was so shocked by what she found one day, that it moved her to share her story with the local media.

It was a typical blistering hot day in the desert when Taylor Waltrip spotted a cat stumbling into her yard. As it made its way closer to her, she could see something was hanging off the animal’s side.

Horrified, Taylor realized it was a sign saying “FREE CAT”. The worst part, it was attached to the kitty’s fur with several pieces of duct tape.

We are going to take this kitty into our fold. He was found at 55th Ave & Happy Valley WITH THIS SIGN DUCT-TAPED TO…

Thankfully, the 11-pound tabby was friendly and Taylor took him inside to see if she could remove the tape but she had no such luck. However, she knew who could help.

She contacted Anthem Pets, a non-profit 100% volunteer animal rescue in the nearby community of Anthem. The volunteers work relentlessly around the clock fostering lost pets in their own homes until they are adopted by a loving family.

Taylor had recently joined the Anthem Pets team and as one of the good guys she sprang into action. A local vet that works with the organization had her bring him in to remove the duct tape in addition to treating him for fleas.

Then Taylor decided to foster the kitty cat, who she named Oscar, since he was poking around her garbage cans when she found him.

Soon, Taylor and Oscar became inseparable. “It’s still so hard to think somebody would do that to him,” said Taylor during an interview with Liftable. “But he has a little special place in my heart now.”

After a while, Oscar started growing on Taylor’s boyfriend and they decided to adopt him. There will always be cats whose stories don’t end as nicely as Oscar’s. But thank to organizations like Anthem Pets and people with like Taylor, many more will find their forever families.