Cashier Asks Why She Doesn’t Get Doll That ‘Looks Like Her.’ Girl’s Response Couldn’t Be More Perfect 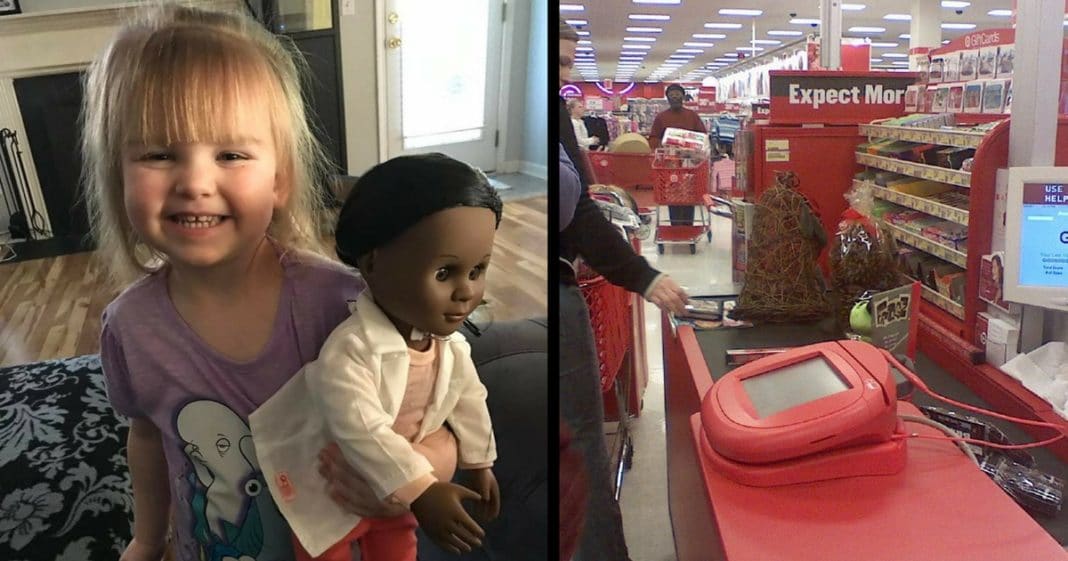 One family’s seemingly innocuous interaction as their local Target recently has been teaching thousands an important lesson about race and the human spirit.

Brandi Benner had taken her daughter Sophia to Target to pick out a special prize as a reward for going poop on the potty for a whole month.

Like many little girls, Sophia is obsessed with dolls, so she of course picked out a special one to take home.

When they got to the checkout counter, though, the cashier and Sophia began to have a conversation that left Brandi stunned.

She explained to the woman that the doll was a prize for potty training, and that’s when the cashier gave Brandi a puzzled look and turned back to Sophia.

“Are you sure this is the doll you want, honey?” she asked.

Sophia gave her a resounding “Yes, please,” but the cashier continued on:

“But she doesn’t look like you. We have lots of other dolls that look more like you.”

Brandi realized the cashier was questioning Sophia’s choice because the doll was black while her daughter was white. She began to get angry at the woman’s underlying racism, but before she could respond Sophia gave an answer that left her momma proud.

“Yes, she does,” Sophia told the lady. “She’s a doctor like I’m a doctor. And I’m a pretty girl and she’s a pretty girl. See her pretty hair? And see her stethoscope?”

The cashier didn’t say much else as she finished ringing them up, and the mother and daughter left the store with Sophia’s treasured doll.

Brandi decided to share the experience with her friends and family on Facebook and the story quickly went viral, garnering hundreds of thousands of likes and shares in just a few days.

“This experience just confirmed my belief that we aren’t born with the idea that color matters,” Brandi wrote. “Skin comes in different colors just like hair and eyes and every shade is beautiful.”

She said she has been overwhelmed by the response they have received from others who have been touched by the little girl’s wise words.

“That is just proof to me that there is SO MUCH good in the world,” she wrote later. “I feel like the media is so addicted to negativity that we tend to harden ourselves and assume the worst in others. But you guys, all I have seen and felt from all of this is pure LOVE!”

She said she is thankful that others have been able to see the love of God shine through her daughter through this experience.

Were you touched by Sophia’s response to the cashier? So share this!