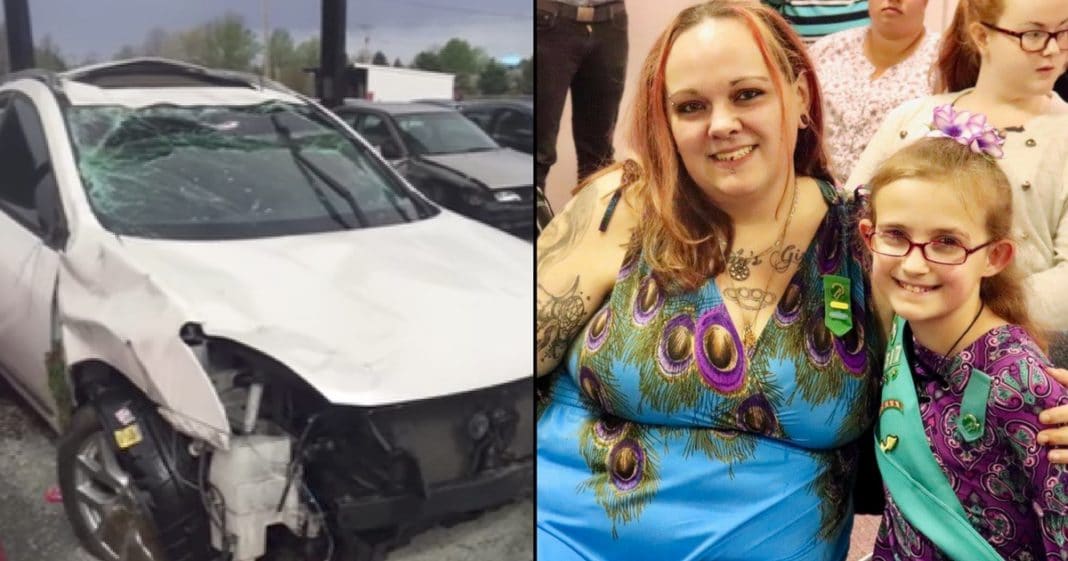 I’ve seen stories with all sorts of heroes: big heroes, little heroes, even animals who take heroic action to save their owners. Never write someone off at first sight. They could one day save your life!

Eight-year-old Melina Lakey and her parents had spent the evening enjoying a movie. On their way home, the unthinkable happened. While driving, they hit what appeared to be a curve, but was actually a ditch.

The car rolled over a total of six times before settling on its roof. Thankfully, the three passengers were wearing their seatbelts, but Melina’s parents were pinned in the front seats by the airbags.

Melina’s dad, Jeff, reached behind and unbuckled his daughter’s seat belt. The young girl then climbed out of the car through the window.

While most kids might have panicked or been frozen in fear, Melina stayed cool and collected. She ran to her mother, Ashley. Then, calm as you please, she removed the airbag that blocked the passenger window and instructed her mom on how to get safely out of the car.

Ashley spoke of how proud she is of her daughter: “Melina risked being cut on glass or injured by car debris,” she told The Indianapolis Star. “She wasn’t concerned about hurting herself; she was getting me out of the car.”

With her mother free, Melina could have let her take over, but the little heroine didn’t stop there. She returned to the vehicle, located her mother’s bloodied cell phone, and dialed 911. Her father was able to free himself.

As they waited for emergency personnel to arrive, her father was able to free himself.

Melina stayed cool and collected through the entire ordeal, and it’s all thanks to the training the young Girl Scout had received earlier that very day. Melina’s troop had gone to the local fire department where they were given safety training and Melina earned her first aid badge.

After the accident – where thankfully everyone came out unscathed – Melina was honored by the Girl Scouts with the Medal of Honor for her level head and quick thinking that night.

“I couldn’t be prouder of her,” Ashley said. “Melina and our entire family are very proud and humbled, but above all else, Melina deserves this.”

I love when kids demonstrate their smarts. They don’t all have their noses stuck to iPhone screens or other electronic devices. This story is proof that young kids really do pay attention to what’s going on around them and internalize much more than adults might realize.

Are you proud of Melina for her bravery and quick thinking that day? So share this!