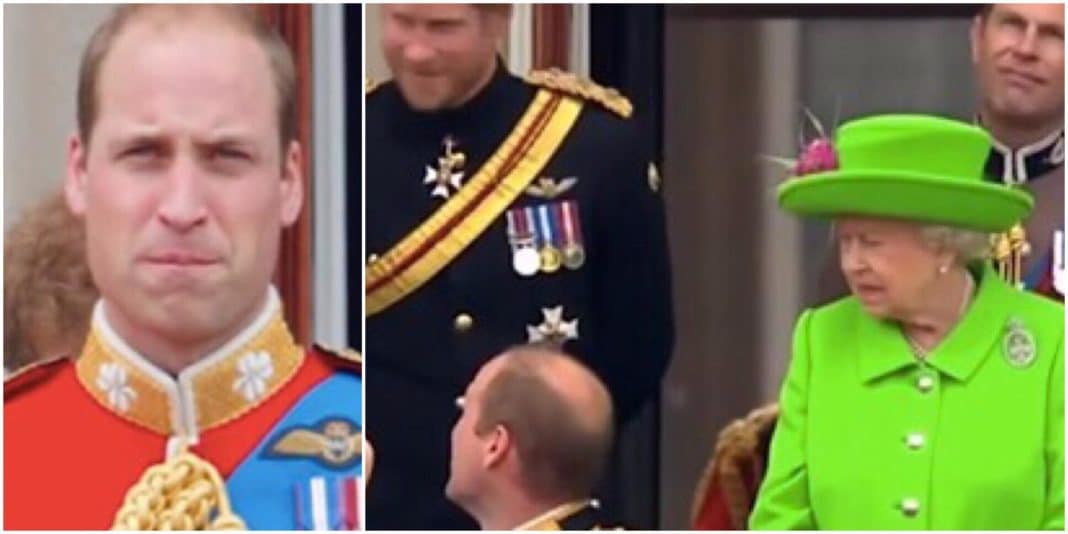 Children and grandchildren are never too old for a scolding. Royalty not excluded. Prince William is third in line to the British throne, but a scolding from his grannie, Queen Elizabeth II put him in his place. And it was all caught on camera.

The incident occurred last year during the celebrations for The Queen’s birthday. Trooping of the Colour is a ceremony filled with pomp and circumstance. All the royals from the oldest, Prince Philip, to the youngest, sweet little Princess Charlette stand on the balcony of Buckingham Palace to observe the event. The men were decked out in their military finery. While Queen Elizabeth stood out in a green suit and matching hat. The Royals stand before the world and the crowds below.

Everything was going marvelously; The queen and royals were all smiles. Prince William did something which got him a jab on the shoulder and some pointed words from his grandmother.

He stooped to speak to his young son Prince George. this isn’t something any good, attentive father wouldn’t do. His timing was just off. The Queen is Commander-in-Chief of the Royal Armed Forces. And when she noticed one of her soldiers wasn’t standing at attention as the colors passed, she made her displeasure known.

That’s all it took for the 6’3 sheepish, chagrinned prince to rise to his feet and fall back in line. I know this incident might have been slightly embarrassing for The Prince. I give him so much credit for being a father at such a formal ceremonial moment. I imagine for Prince George, there are so many things he’s witnessed that are confusing and uncertain for him. William has faced those emotions and knows what his young son must be going through. Good for him for looking out for his son.