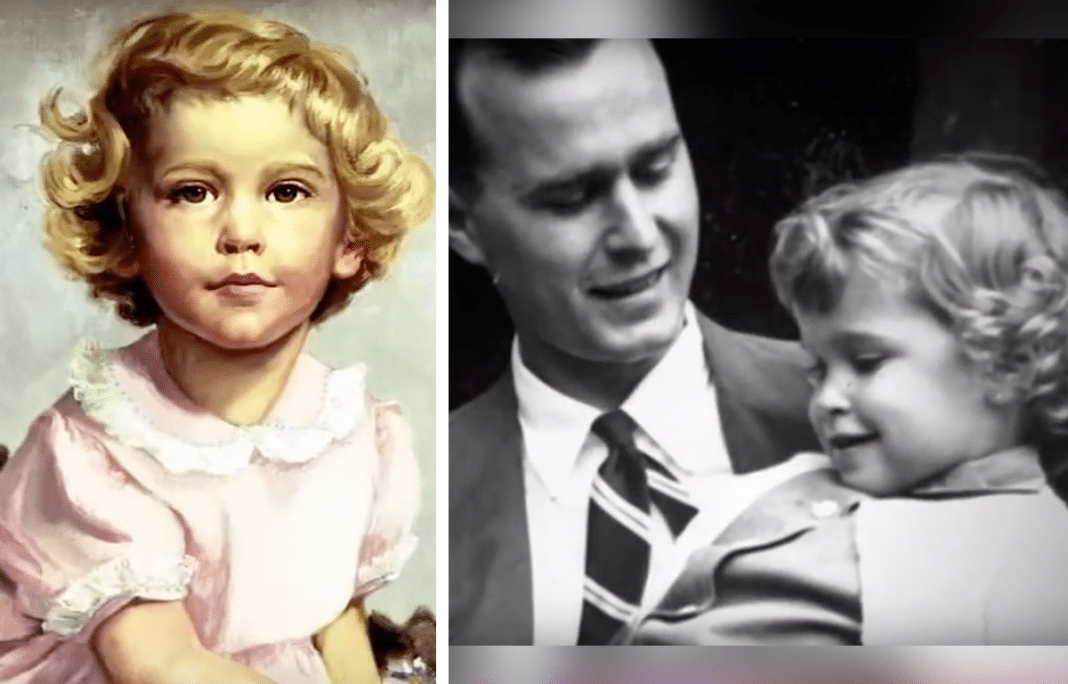 Although America grieves the loss of a remarkable man and former president, George H. W. Bush, they take some solace in knowing he will be with Barabara Bush, his beloved wife of 73 years. The faithful hope they will also walk together with Pauline Robinson “Robin” Bush, who died at just three years old in 1953.

At a time when cancer was poorly understood and even taboo to speak about, George and Barbara moved from Texas to Manhattan to fight for their daughter’s life after getting a grim and unfamiliar prognosis of leukemia. Robin underwent hospital treatment for seven agonizing months. The parents did their best to stay strong for Robin, following Barbara’s rule:

“No crying in Robin’s room.”

According to the Washington Post, George would step out of the room when he felt the tears coming. He was heartbroken for the child he described as a “legitimate Christmas angel” in a letter to his mother five years after her death.

“We used to laugh and wonder if Robin thought he had the weakest bladder in the world,” Barbara Bush remembered.

“Not true. He just had the most tender heart.”

When Robin passed away, Barbara was in despair. However, over the next six months, the tragedy brought the couple closer together. George stood by his wife, consoled, and loved her as they grieved the devastating loss.

Now following President H. W. Bush’s passing on Friday, November 30, the George Bush Presidential Library has begun releasing audio recordings made by the former president. One of the recordings features Barbara reading the letter that her husband wrote to his mother in the summer of 1958.

It’s clear that Robin’s death left a vacancy in the Bush’s hearts and home. Bush longed for the presence of a girl in the family of boys. Six years later they would have another daughter, Dorothy.

“We need her and yet we have her.”

“We can’t touch her and yet we can feel her.”

“We hope she’ll stay in our house for a long, long time,” wrote Bush.

“There is about our house a need. We need some soft blonde hair to offset those crew cuts. We need a dollhouse to stand firm against our forts and racquets and thousand baseball cards.”

“We need someone who’s afraid of frogs. We need a little one who can kiss without leaving egg or jam or gum. We need a girl. We had one once — she’d fight and cry and play and make her way, just like the rest. But there was about her a certain softness.”

“She was patient. Her hugs were a just little less wiggly … But she is still with us. We need her and yet we have her. We can’t touch her and yet we can feel her. We hope she’ll stay in our house for a long, long time. Love, Pop.”

It’s heartwarming to think that the former president is finally reunited with his daughter in heaven. According to his granddaughter, Jenna Bush Hagar, Bush told her he looked forward to his death, because he firmly believed he would see Robin, his mother, and Barbara again.

“Yes I think about it. I used to be afraid. I used to worry about death. But now in some ways I look forward to it.

Hagar shared a cartoon by Marshall Ramsey on Instagram. It showed the three Bushes together at last, walking on the clouds together hand-in-hand. In the caption, Barbara Bush tells her husband.

“We waited for you.”

Hagar explained that her grandfather had repeated a phrase that Robin used to say, weaving Robin’s words into the fabric of the Bush family since Hagar was a little girl.

“I love you more than tongue can tell.”

This brought me such comfort this morning. I had the opportunity to talk with my grandpa about the afterlife. This is what he said: ​He answered without any hesitation. “Yes, I think about it. I used to be afraid. I used to be scared of dying. I used to worry about death. But now in some ways I look forward to it.” And I started crying. I managed to choke out, “Well, why? What do you look forward to?” And he said, “Well, when I die, I’m going to be reunited with these people that I’ve lost.” And I asked who he hoped to see. He replied, I hope I see Robin, and I hope I see my mom. I haven’t yet figured it out if it will be Robin as the three year old that she was, this kind of chubby, vivacious child or if she’ll come as a middle-aged woman, an older woman. And then he said, “I hope she’s the three-year-old.” Robin was the daughter this giant of a man lost years before to leukemia. The little girl he held tightly: who spoke the phrase I have heard Gampy repeat for my entire life, forever knitting Robin’s voice into the tightly woven fabric of our family: “I love you more than tongue can tell.”