Bullies Call This Teen ‘Fat,’ But Her Boyfriend’s Response Leaves Them All Speechless 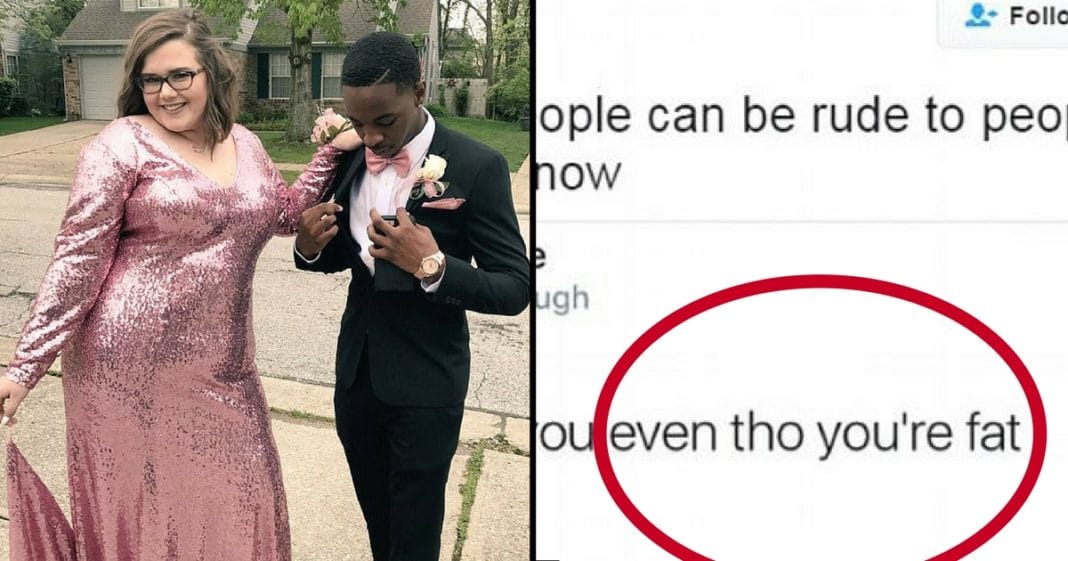 Sometimes all it takes is a few cruel words to ruin your self-confidence. But one student refused to let online trolls fat-shame his girlfriend, hitting out at the cruel commenters by sharing his own message of love and support that has all of the internet praising their relationship.

Tre Booker and his girlfriend Madison Haulter of Indianapolis, Indiana have been together for more than a year. The happy couple regularly shares pictures of them together and posts about their love for each other across social media.

So naturally, when the pair attended the Pike High School prom, they shared a series of adorable photos showcasing Madison’s full-length pink sequin gown, and Tre’s color-coordinated bow-tie and corsage. 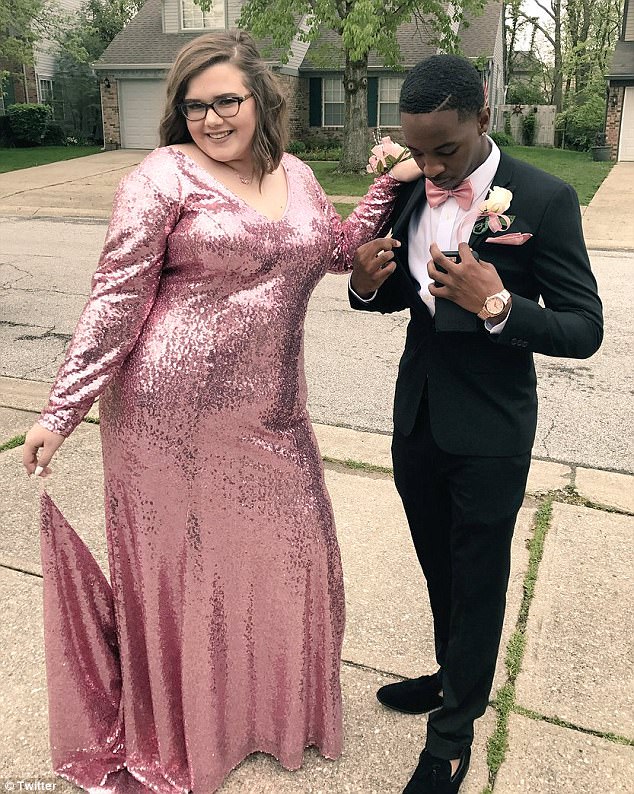 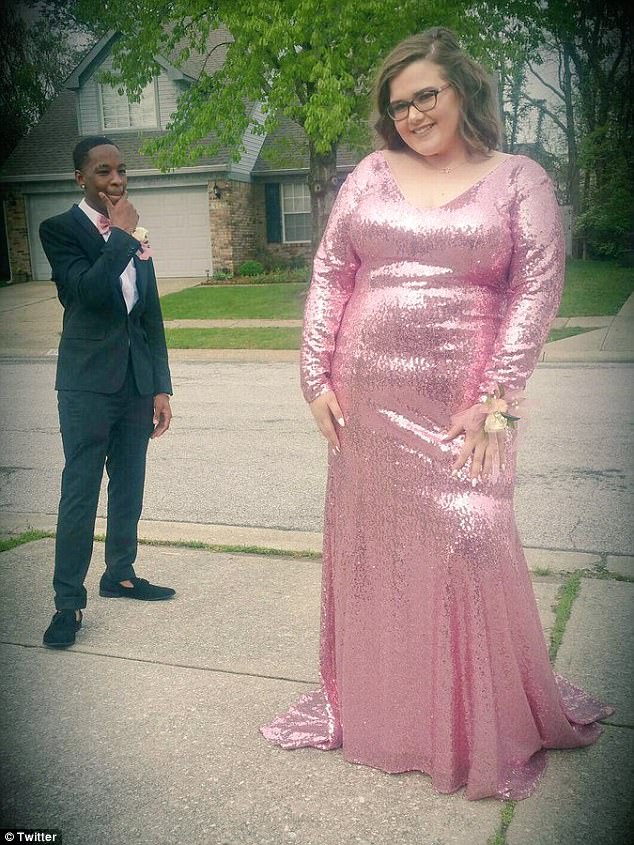 Love is in the air: The couple has been together for more than a year, and regularly posts sweet messages and pictures addressed to each other on Twitter 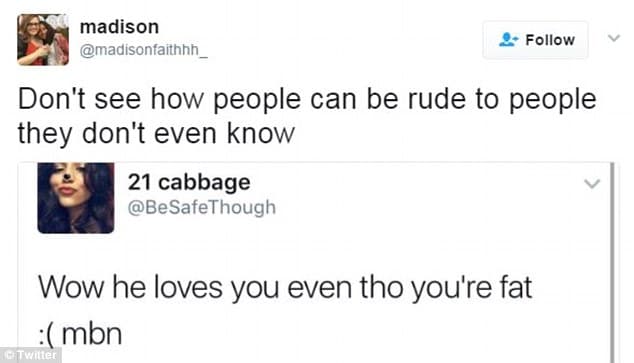 Backlash! Not everyone felt Madison and Tre’s prom pictures were romantic – and this Twitter user even went so far as to fat shame Madison

But while the couple looked blissful as ever, not everyone was feeling the young couple’s joy. Madison returned home from the dance to find someone had left a fat-shaming comment on her prom pictures.

‘Wow he loves you even tho you’re fat 🙁 [must be nice],’ said the comment.

Madison took a screen shot of the rude reply and posted it to Twitter, saying, ‘Don’t see how people can be rude to people they don’t even know.’

Within minutes, messages of love and support started flowing in, with Twitter users saying, ‘Miserable people never want to see genuine happiness in others. You looked absolutely gorgeous,’ and ‘Oh my word you two are just adorable. You look so beautiful!’

Yet, the most powerful response of all came from Tre himself who, upon seeing the rude comments that others had left for his girlfriend, replied, ‘Your not fat baby. God made you just for me. Your perfect. [sic]’

Tre’s open support for Madison doubled the love shown for the pair.

‘Way to stick up for your girl bro,’ said one tweet. ‘A lot of dudes [are] scared to do that.’

The couple is clearly meant to be. They even have the overwhelming support of Madison’s father, Tom, who recently spoke to Fox 59 about his daughter’s relationship:

Stepping in: No response to Madison’s fat-shamer was more romantic than Tre’s, who insisted that his girlfriend of a year is perfect the way she is 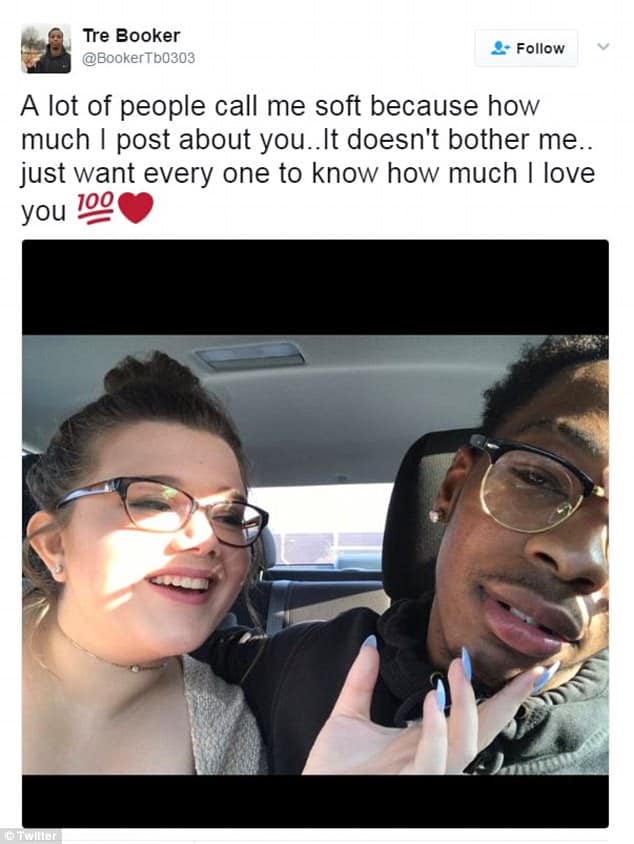 Soft? Who cares! Tre regularly shares images of him with his beloved girlfriend, and expresses that it’s okay to be emotionally open when you love someone

Read what Madison’s father has to say about Tre on the Daily Mail.