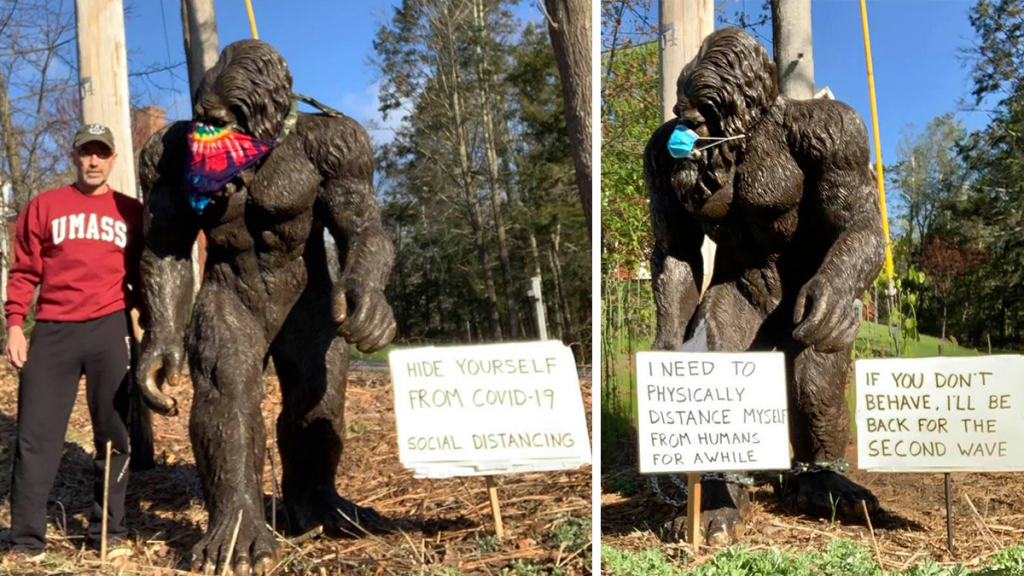 Brimfield, a town in Massachusetts known for America’s oldest outdoor antique flea market, has had to cancel due to Covid-19. The global pandemic has upended life across the country, but then hope sprang from an unlikely source for Massachusetts communities: Sasquatch.

In March, Sarah Prager, a new mom to a 7-month-old girl, started taking drives into neighboring towns to relieve stress. Both she and the baby were having trouble sleeping, but the car’s motion had a calming effect on the baby. Then, on one such drive into Brimfield, she spotted something she hadn’t given much thought to before, a statue over 6 feet tall.

“A man about three miles from my house keeps a 6-foot-tall bronze-colored statue of Sasquatch by the road at the end of his driveway. The so-called Brimfield Bigfoot had been there for years, but I hadn’t seen him much before, since I usually turn east from my home to go toward Boston on Route 20, and he hangs out in the less populated areas to the west,” wrote Prager.

It seems the Brimfield Bigfoot took up a new habit of wearing masks and bandanas in March. Plus, he took to holding up signs to show encouragement to everyone driving by. As the often-described World Champion in Hide and Seek, Bigfoot’s social distancing messaging is particularly on-point.

“Be the missing link. Stay home.”

The Sasquatch also offered encouragement for other Covid-19 related tips.

“Stomp out Corona, one Bigfoot at a time.”

“Sasqwash your hands for at least 20 seconds.”

“Squatch your desire for a haircut.”

“The best is Yeti come.”

In addition to punny signs, Bigfoot also held up flags like one to commemorate “Wakanda forever,” after the Black Panther movie. In another instance, he held the Rebel Alliance flag from Star Wars with the Facebook caption:

“Don’t rebel against masks, at the moment they’re our only hope.”

Prager and others in the community came to look forward to seeing Bigfoot’s signs. During a stressful isolating time, they set just the right humorous tone, a show of solidarity and community. Then in April, the Brimfield Bigfoot disappeared.

Todd Disotell, an anthropologist who owned the beast, posted to Facebook, asking folks to keep an eye out for Bigfoot because somebody stole him. Although the thieves might have thought it a prank, Disotell, who has made TV appearances related to Bigfoot, was serious about getting the locally-famous creature back.

Disotell offered a $200 reward and shared security video of two hooded figures making off with the statue on a Wednesday night.  See the video below:

Then, Police Chief Charles T. Kuss began his search for Sasquatch. Due to the area’s antique markets, he had seen similar thefts, including a giant chicken and a Big Boy statue.

Recommended Read: The Virtual Bar Scene is Taking Off

Kuss called the Sasquatch “a fine example of the species which might look like the real thing to a city slicker.” After valuing the Bigfoot at $2,400, he noted that whoever stole him could face grand larceny charges.

“Our hope is their conscience overcomes their greed and they return it,” he said, adding that if they are caught, they’ll be charged. “And I’m sure it’s been a while since the DA has prosecuted the theft of a Sasquatch.”

With Bigfoot missing, Prager says she was surprised how much she missed him on her drives.

“The amount I missed Sasquatch surprised me, and I realized how much this creature had become my cheerleader to avoid humans like he does. It takes a lot of willpower to stay away from your friends when you desperately want to see them, and Bigfoot’s messages had made me feel like I was accountable to someone who was directly asking me to keep my distance. The signs were written by a neighbor for other neighbors: We were all in this together.”

Fortunately, by Friday morning, the famous Bigfoot was recovered in nearby Worcester, reported the police. A Worcester resident phoned police when they spotted the famous statue in the yard of a small multifamily house. Disotell drove to the scene to reclaim the mythic beast once more.

Hearing the news, Prager was delighted. She remembers grinning with joy at a time when smiles have often been less frequent.

“I may have substituted human contact for glimpses of a mythological creature since socially isolating, but Bigfoot has helped me feel human connection again,” she wrote.

Meanwhile, Disotell and the community were delighted that the creature was back home. As it turns out, this Bigfoot was a Christmas present from Disotell’s father.

Bigfoot was back on the job, posing with a sign that read, “If I can escape Worcester, You can Covid-19.”

“Thank you everyone and Brimfield, State & Worcester Police.”

Although Disotell remains skeptical that Bigfoot exists in the wild, the one returned to his care has brought inspiration and some measure of comfort to thousands. We hope the Brimfield Bigfoot remains on the job for many years to come.