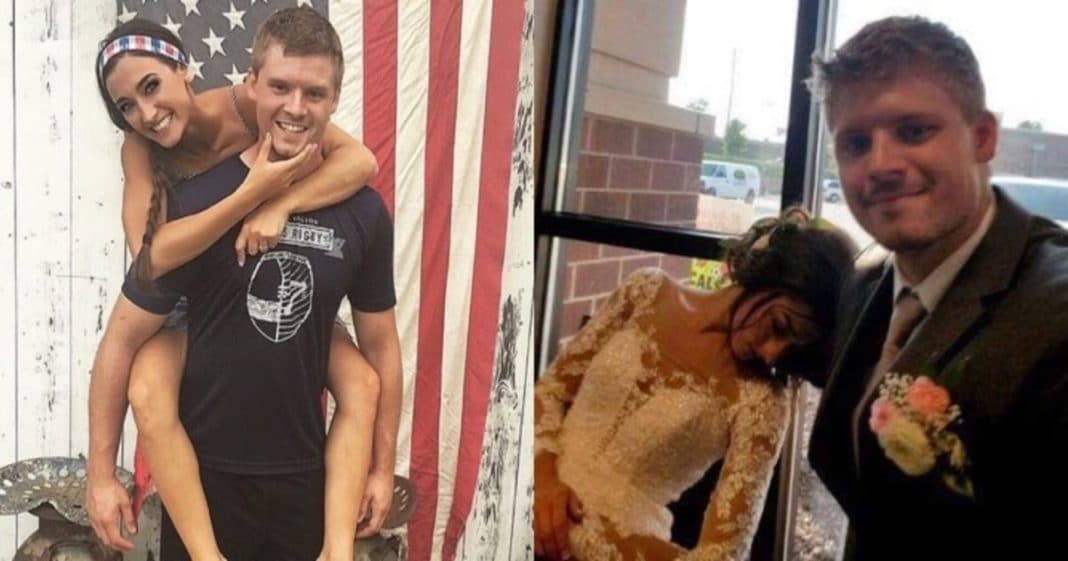 A woman’s wedding day is supposed to be perfect; she’s to remain relaxed and stress-free. This is a day she’s celebrating reaching a milestone by marrying the one she loves, not going to the hospital.

Christine Jo has a 29-acre property near Lincoln, Nebraska. The evening before her wedding day, she had the idea to add more flowers to her ceremony. Little did the bride-to-be know the blooms she chose because of their white color were poisonous.

Christine picked the flower, snow-on-the-mountain and added them to her bouquet. The next morning, she woke up excited to be marrying her college sweetheart, Jonathan Miller and become his wife. The 23-year-old washed her face. Soon after, it started breaking out.

She didn’t realize that she still had residue from the flowers on her hands. By 11:30 that morning, her mother took her to an emergency clinic that was closed that September day. So, trooper she is, with swollen eyes and all, Christine decided to stick it out and don her dress and head for the church.

Despite feeling terrible, Christine walked down the aisle. Her white dress contrasted with the red bumps and rash on her face. Not that she could see this. Her watery eyes were swollen shut. Christine feared she’d go blind.

“I literally couldn’t see my husband when I was saying my vows because my vision went blurry,” she told HuffPost by email. “So blurry I passed out twice at my reception.”

She was in so much pain; no one knew what should be done. Christine’s eye problems started a dramatic domino reaction. Think her wedding day couldn’t get worse? Think again. “Due to all of this going on, and since I put my wedding dress on 20 minutes before walking down the aisle, I forgot to wear shoes at the forest wedding,” Miller said. “My veil fell out twice walking down the aisle, we forgot our rings, and our wedding song didn’t get played.”

The pair also skipped the unity part of their ceremony because they forgot the items needed: “Our pastor cut it short and married us in a hurry because of the pain I was in,” Miller said. “Literally my entire day was a mess hahaha.”

Poor Jonathan and Christine. They managed to exchange their vows, but now it was time to head to the hospital to get Christine’s medical issue sorted out. She needed medicine ASAP. But wouldn’t you know it, if something else could go wrong it did? their insurance didn’t get it right, not realizing she was newly married.

With the right group of gals, the perfect man at the end of the aisle, and the family that goes above and beyond for you– forgetting the rings, forgetting the unity rope, getting 1 hr of sleep before the wedding, forgetting wedding shoes, having your veil fall off twice during the ceremony, getting an allergic reaction at your wedding, taking a trip to the ER for a shot in the butt between ceremony and reception and getting ready to walk into your reception in Jammie's 3 hrs late doesn't seem so bad. My HUSBAND got an early peep show so that's was good enough for him and I have some of the best ladies holding the fort down til I get there with my party pants on….. this will definitely be a story to tell ? #millermade2017

That was the new Mrs. Miller’s post on Instagram before she was given eye drops, medication, and a steroid shot. She and Jonathan finally made it to their wedding reception…3 and a half hours late.

“Everyone had already been done eating a while and were still awkwardly sitting at the tables,” she told HuffPost. “Nobody knew if it would be good or bad to update them. We thought they deserved to know why they were sitting in the same spot for so long and I wanted my wedding to keep going even though I wasn’t there,” Christine explained.

The bride didn’t show up to her reception in her wedding gown. She wore pajama pants and a shirt her groom found at Target that said “bride.”

“I didn’t wear my dress into the reception mainly because I went fully blind and had been tripping over it since I couldn’t see where I was walking,” Miller explained.

The couple did have their wedding dance. But other than that, Christine had a miserable time. She couldn’t eat, drink or be merry: “I laid underneath my grandparent’s table for a large portion of the night icing my eyeballs and crying.

“I was the scariest-looking person at my wedding,” she told Inside Edition.

There is video of the wedding ceremony, but thankfully, the photographer allowed the bride and groom to take their wedding photos a week later after Christine made a full recovery. This time, the bride made sure her bouquet was hypoallergenic.

Christine’s right; she and Jonathan will have an entertaining story to tell their grandchildren. They weren’t laughing last September, but surely they will in the future when they recount the trials and tribulations of their wedding day.