Bride Confused When He Hands Her Rubber Duck, But What Comes Through Door Next Leaves Her In Tears 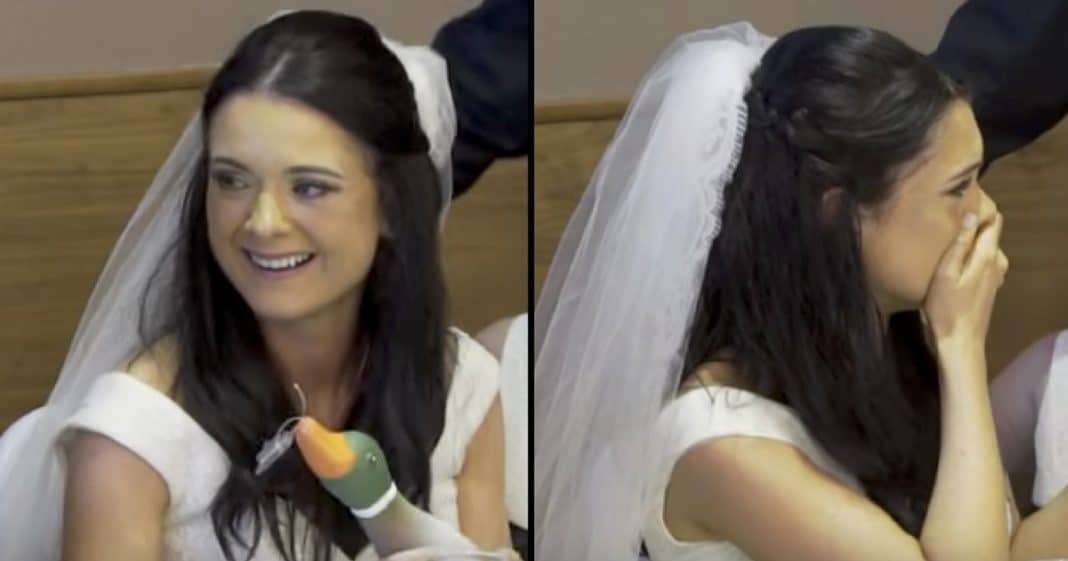 After months of careful planning and preparation, a surprise is usually the last thing a bride wants on her wedding day. But when Stephen and Keriann Watt got married, a big surprise turned out to be one of the best parts of the night!

The just-married couple was seated at the head table when Stephen got up to give a toast. He handed Keriann a wrapped package and told her it was a wedding present.

The excited bride eagerly opened the package, but when she found a squeaky rubber duck inside she was confused.

Then Stephen told her to point the duck at the door. Playing along, Keriann laughed as she did what he said, but what happened next had her crying tears of joy.

Into the room walked a man holding a tiny pug puppy in his arms. Stephen told Keriann the puppy was theirs!

Anyone who knows Keriann knows that a pug was the absolute perfect present for her to receive on what was already the happiest day of her life. The bride has wanted a pug of her own for years!

“My obsession with pugs started easily 10 years ago,” she said. “Due to my love for pugs, over the years, friends have indulged me with pictures, cushions, soft toys, salt shakers, etc, and when people came to our home they couldn’t believe that we didn’t have a real one.”

“I can’t quite believe that I have my own real one now and no longer have to stalk poor pug walkers in the parks,” she joked.

It turned out Stephen had been planning this incredible surprise for five months! Only he, his best man, his usher, and the videographer knew about it.

“To give Keri her perfect wedding day meant that there had to be a pug,” Stephen said. “There was no way I could let that pass.”

Keriann’s tears of joy as she cuddled and kissed the tiny puppy were proof enough that Stephen had made the right call! And in case he had any doubts about the surprise, there was one thing about the little puppy that let him know without a shadow of a doubt that he had made the right decision – she has a tiny heart-shaped spot on the top of her head!

“[I] could not have chosen a better pug to bring into our lives,” Stephen said.

“It was wonderful to be able to capture her reaction,” said videographer and friend John Paul Lusk, who has known Stephen since high school. When he heard Stephen’s plan, he knew it was the perfect way to surprise Keriann on their wedding day.

As for Keriann, she said it took a little while for it to really sink in that the tiny puppy was hers.

“I thought it was some sort of joke,” she recalled. “When I saw the pug, I couldn’t quite believe it. I was overcome with emotion and a little overwhelmed.”

The puppy will go back to the breeder’s while the couple honeymoons in New York. As soon as they return to Scotland, they will pick up their new little fur baby and take her home.

While we’re sure the Watts are having a great time on their trip, Keriann is sure to be itching to get home to see her new puppy!

Stephen joked with wedding guests that they might not be seeing the couple for quite some time now that they have become a family of three.

“When we come back from honeymoon, this is our life,” he laughed, pointing to Keriann and the puppy. “So, bye!”

The couple says they have picked out a name for their “new little addition,” but they want to make sure it fits her before they share it with the world.

One thing is for sure, though – this is going to be one well-loved and spoiled little dog!

Said Keriann of the wedding day surprise: “It was the best day ever and that just topped it all of course.”

Did you love watching Stephen surprise Keriann as much as we did? So share this!