Bride Confused When Groom Jumps Into Lake, But When She Sees Why Her Heart Melts 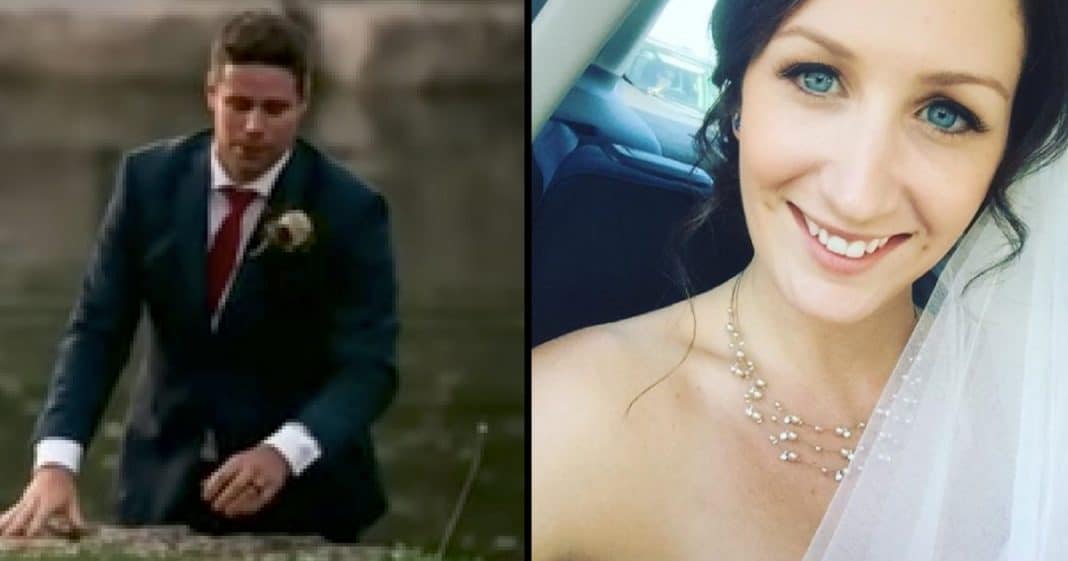 As a child, your favorite hero was probably one whom you watched on TV regularly, saw in a movie one weekend, or even read in a comic book. Once you grew older, you may have begun acknowledging more important people in your life as your heroes: parents, grandparents, teachers, doctors, etc.

Well, it is safe to say that for Brittany Cook, a newlywed bride from Cambridge, Ontario, her hero of choice would be…her husband.

I’m sure when marrying Clayton she knew that he was compassionate and courageous, but I don’t think she expected to see those characteristics come alive in him on their wedding day in such a heartwarming way.

On September 22nd, Brittany Cook was at Victoria Park in Kitchener having her solo bridal photos taken by wedding photographer Darren Hatt while her husband, Clayton, stood only a short distance away. It was a beautiful day at the park, with its stone wall, river, and vibrant green grass, and they weren’t the only ones taking advantage of its grandeur.

Nearby, three young boys were strolling by the river when one of them pushed another into the water. Clayton, whose attention went back and forth between his bride and the kids, suddenly noticed that one of the boys was missing from the group. Soon enough, he came to realize that not only was the kid in the water, but he was possibly drowning too.

Clayton ran to the young boy’s aide, using the rocks as a launchpad for his rescue. According to Clayton, “[the boy] was only a little guy,” enabling the groom to grab him and easily pull him out of the river.

When speaking with CTV News later, Clayton said the boy’s “face was underwater, and he was…he was fighting. Like, he was really fighting.”

Upon being saved, the young boy didn’t say a word, but he stayed at Clayton’s side until an older sibling came to pick him up.

Brittany and their photographer watched the whole thing, both amazed by Clayton’s bravery. Thankfully, Darren was able to get some great photos of Clayton’s heroic deed.

In the video below, Brittany and Clayton relive the moment that made their wedding day unforgettable.

Thank you, Clayton, for showing us that not all heroes are fictional and that not all of them wear capes…they can wear suits, too!

Do you agree this groom is a hero? So share this!