Brats Spit On Chick-fil-A Owner, Throw Ketchup At Staff, So He Teaches Them Lesson They Won’t Forget 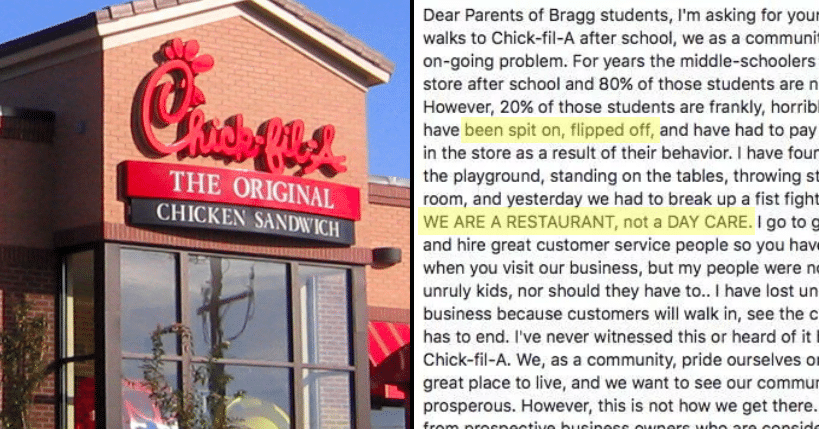 It irks me when parents believe their children can do no wrong. They think their kids are more special than other children, incapable of getting into trouble.

Sorry to break it to you naive folks – no child is a perfect little angel. All kids get into mischief at some point during their childhood or adolescence.

At what point, though, does their behavior become unacceptable? I think parents should always know what their children are up to, especially when not at home. Kids need to earn their parents’ trust; and if that trust is ever broken, actions should be taken to ensure the kid knows there are severe consequences to their actions.

As a parent, you’re responsible for raising your children. It’s not up to their teacher, sports coach, school counselor, or – in this case – a fast-food chain owner. If your kid causes problems, you must take responsibility for what they’ve done.

Gardendale is an upscale yet affordable suburb of Birmingham, Alabama. Mike Holmes is the owner of the Chick-Fil-A there.

After school, students from Bragg Middle School head to the fast-food chain that Business insider named the best in the country for its yummy chicken sandwiches and crunchy waffle fries.

You’d think Mike would be pleased with the business the teens bring to his restaurant. Sadly, you’d be wrong. Earlier this month, Mike posted an open letter to parents expressing the challenges he faces as a local businessman.

“Dear Parents of Bragg students, I’m asking for your help,” he wrote. “If your child walks to Chick-fil-A after school, we as a community need to address an on-going problem.”

The issue isn’t simple adolescent rowdy behavior or immaturity. Some students who frequent Mike’s restaurant participate in behaviors ranging from inappropriate to criminal.

In the letter, Mike said he has been forced to address inappropriate displays of affection, kids standing on tables, and destruction of restaurant property. Once, he even had to step in and end a fist fight.

Mike has tried to deal with these unruly adolescent patrons on his own, but he’s clearly come to the end of his rope. When interceding in these incidents, some kids have spat on him and leveled obscene gestures at him.

“I have tried everything I can think of, including hiring an off-duty police officer at $35 an hour to monitor the dining room,” he wrote. “The result was a verbal beatdown from some parents because they said the officer intimidated their child.

“These are the same kids who flipped off my mother and threw ketchup packets at her. Consider for a moment that maybe your baby is not as innocent as you think.

“I get calls regularly from prospective business owners who are considering opening a business in Gardendale, and they want my opinion on what they should do. How would you respond if you were me?”

Bravo, Mike! Tell it like it is. These parents’ eyes need to be opened to the terror their kids are causing.

The frustrated owner wasn’t done. He concluded his open letter by laying out a simple solution: If your kid acts out, they’ll receive one warning before being banned from his restaurant for a month.

Think these consequences are too stiff? I don’t. And neither does the wider community of Gardendale.

“It’s up to us as parents and people who live in this area to support their business and to understand this is a cry for help,” she said.

“I think if parents would just walk inside when it’s time to pick up their kids, take a look around, see what their child’s doing, I think the kids would calm down, too, and not be so rowdy if they knew their parents could walk in at any minute,” she added.

Bragg Middle School principal Brad Robertson told WBRC he was aware of the letter and planned to see if he could get the names of any of the offending students.

Mike is glad to hear this. He’s always loved the community overall.

“Gardendale is such a wonderful place to live, work, worship and raise a family,” he told The Birmingham News in 2014 as he celebrated the tenth anniversary of his restaurant’s opening. “I feel sometimes like I am living a dream because of how much God has blessed us.”

I applaud Mike for taking a stand against these uncouth youths. How dare they act out so irresponsibly! I’m certain most of them were raised better than they’re behaving. Hopefully these parents will wake up and help Mike out.

Do you think Mike was right to address this problem and take action against these rude students? So share this!