Boy Sees Sick Girl On Jumbotron. What He Does Next Leaves Entire Stadium In Tears 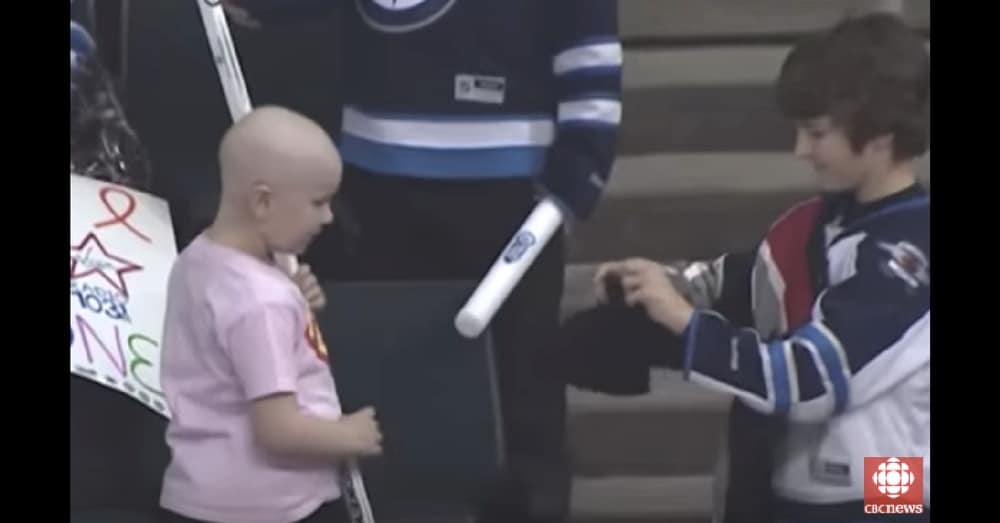 Sometimes it takes the actions of a child to remind us to show others love and kindness. Nine-year-old Keaton Hamin is doing just that.

Keaton was at a Winnepeg Jets hockey game when he noticed a girl with a shaved head on the Jumbotron.

The girl’s name was Alyx Delaloye, and she has been battling leukemia.

Alyx and her family had been at a previous Jets game when the camera spotted her and her sign, which read, “Chemo by day…Jets by night.” The team invited her to come back to their next game, and that’s when Alyx met Keaton.

Keaton had won a signed hockey stick and Alyx went down to check it out. As she went back to her seat, she didn’t notice Keaton following her. When she turned around, though, she saw him standing by her row, and that’s when he did something that left the entire stadium in tears.

Click below to see Keaton’s sweet act of kindness toward Alyx.

Often as adults we are so focused on ourselves and what is going on in our lives that we forget to pay attention to what others are going through around us. Keaton’s selfless act reminds us to put others first and show a little kindness to those around us.

Were you touched by Keaton’s sweet act of kindness toward Alyx? So share this!