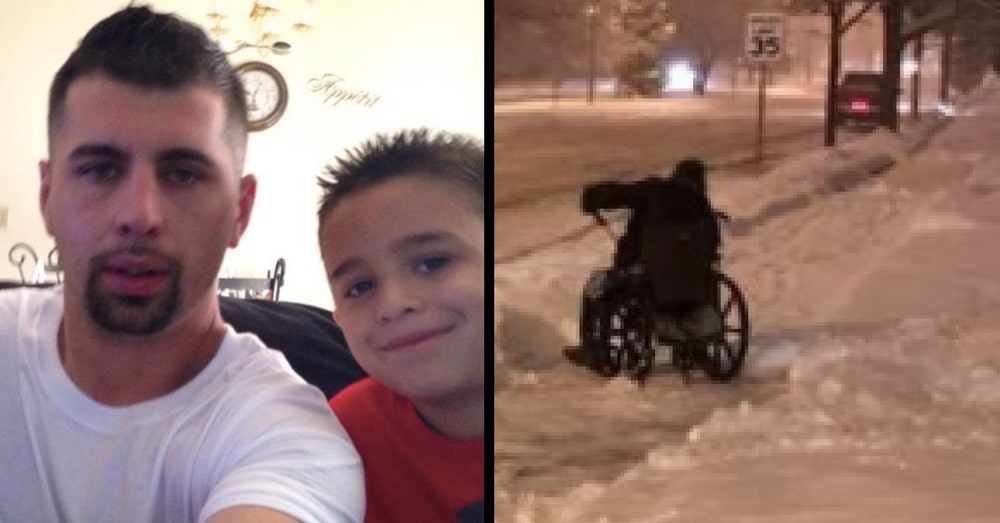 Most kids would whine and complain if they were asked to shovel the snow. That’s why Daniel Medina was so surprised when his 10-year-old son, Daniel Jr., asked if he could help shovel a sidewalk. But the reason why this young boy wanted to grab the shovel has made Medina one proud papa.

Medina and his sons, Daniel Jr. and six-year-old Dominic, were on their way home from the mall in Milwaukee, Wisconsin, when Daniel Jr. suddenly asked his dad to pull over. When Medina looked over he saw a man in a wheelchair trying to shovel the sidewalk in front of his home.

“I didn’t even see the guy because I was concentrating on driving in the snow,” Medina said. “My oldest, Daniel, said, ‘Pull over, let’s go help him.’ So I said, ‘OK, let’s go.’”

The father and sons found a few more shovels and then spent the next 45 minutes helping the man clear his walk. They didn’t stop until the job was done.

The man they helped couldn’t believe that three strangers – two of them kids, no less – would go out of their way to help him with the hard work.

“He was grateful,” Medina said. “He kept telling us thanks and kind of supervised us, made sure we dug out the bus stop in the corner, and also his car because he had a doctor’s appointment the next day.”

Medina posted a picture of the boys helping, which has since gone viral.

He called the encounter a “proud dad moment.” Seeing his young boys voluntarily go out in the cold to help a stranger in need was proof that he’s doing something right as a dad.

“It just made me happy,” he said. “They know to hold doors for people and all their manners.”

Daniel Jr. and Dominic’s mother lives in New Mexico and also uses a wheelchair, and Medina believes that made the boys more eager to help someone in a similar situation. He knows they would want someone to help their mom in the same way they helped this man.

Perhaps unsurprisingly, when it came time to shovel their own walk that night the boys weren’t quite as enthusiastic.

“You know what’s funny?” Medina asked, laughing. “I couldn’t get the kids to help me at home. I said, ‘hey kids, want to shovel?’ And they said, ‘No, Dad, it’s pretty late. We have to shower and get ready for school.’”

After the incredible act of kindness they showed this man we think they deserve the break!

Were you touched by what these boys did for a stranger in need? So share this!