Bleeding 10-Yr-Old Forced To Crawl Home, Rushed To Hospital After Telling Mom What Happened To Him 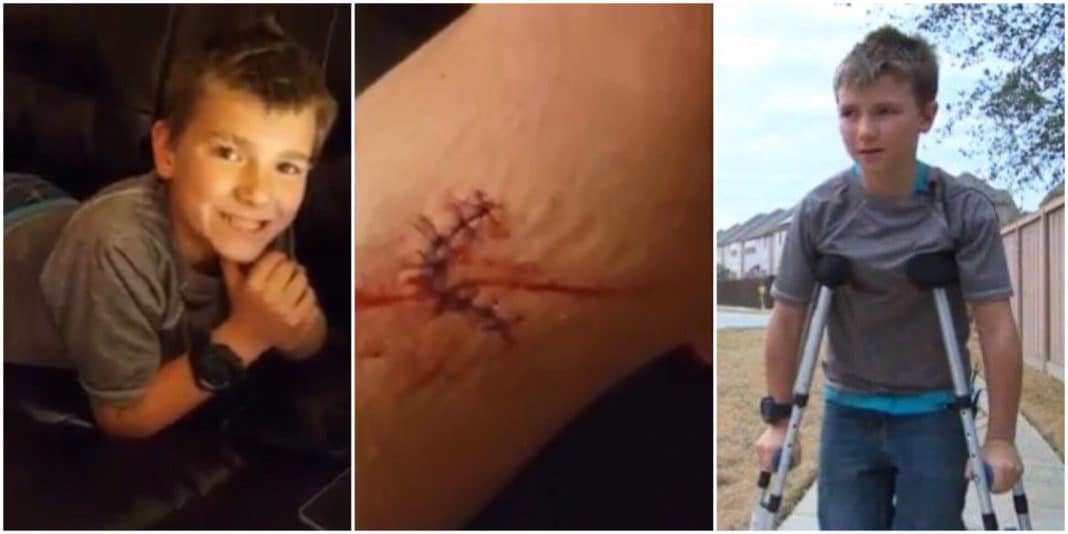 10-year-old Caden Walsh was walking home when a driver jumped their vehicle onto the sidewalk and struck him before driving off again, NBC 4 reports. His parents received the shock of a lifetime when they heard a noise at the door and saw Caden there, bleeding and in pain.

The impact pushed the young boy into a tree and he became disoriented, when he realized how much he was bleeding he crawled back to his home. All he remembers was that the vehicle that hit him was a dark-colored SUV.

“[I was] scared, I really didn’t know what was gonna happen, I’d never had an injury at a time that bad,” Walsh said. “I haven’t ever broken any bones, not nothing.”

By 3:35 that afternoon, Walsh’s stepfather Jay Brady was starting to wonder where he was — then there was a noise at the door.

“He’s down at the bottom of the stairs, his leg is just covered in blood, he probably has a ball pin hammer sized chunk of his leg missing, he’s just screaming blood-curdling screams,” Brady recalled.

Walsh was rushed to the hospital where he had to get stitches for his leg wound.

“He’s doing OK, he’s in some pain. He decided to go to school today on crutches and everything,” Brady said. He can’t play football at recess now, and his parents aren’t allowing him to walk home from school.

Now, Walsh’s mother, Heather Brady, is looking for answers; “He could have been dead on the side of the road because somebody just took off, because they didn’t care enough to even go check on him, they just took off, what kind of person does that?”

“Somebody out there knows something and we just want that person to come forward so we can get justice for our 10-year-old son.”

The driver who hit 10-year-old Caden Walsh still hasn’t been identified, but the family is hoping that someone will come forward with information pertaining to the case.