Black Man Knocks On Cop’s Window So He Fearfully Rolls It Down. What Happens Next…Wow 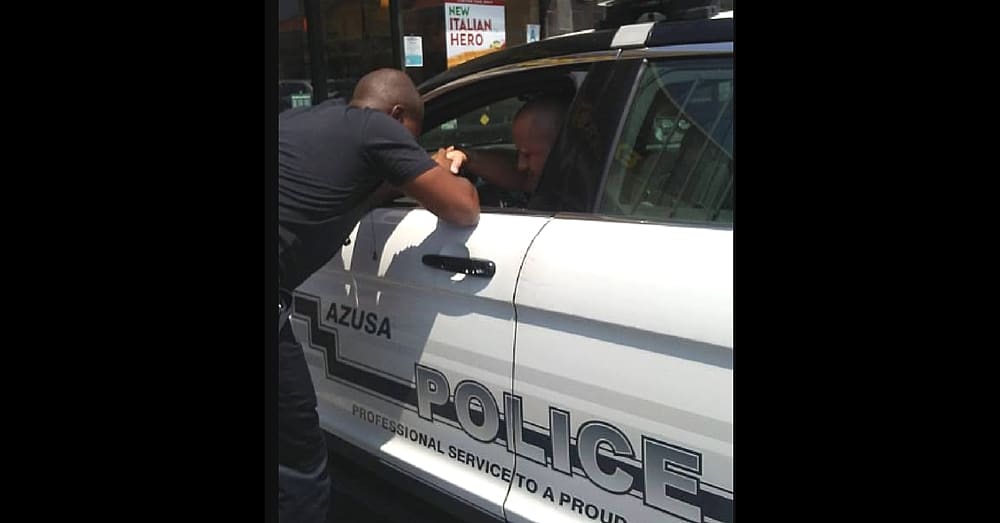 With all the violence against police that has become so prevalent recently, it isn’t surprising that when a black man came up and knocked on this police officer’s window he was a little hesitant to roll it down.

Ashley Ferrell-Franklin shared about the moment on the Love What Matters Facebook page. The man in the picture is Ashley’s husband, Tyrone, and she says he is her hero.

When Tyrone saw the police officer sitting in his patrol car in front of a Subway, he felt compelled to do something.

“Instead of entertaining the hatred, he saw the police in a scary predicament and in need of God,” Ashley wrote.

He walked up to the officer’s car and tapped on the window. “The officer, not knowing what is happening rolled down his window in fear,” she said. “And then..my husband asked if he could pray over him for protection.”

Ashley said the officer looked stunned at first, then gave Tyrone “the biggest smile” and said, “please do.”

Ashley was able to capture the beautiful and healing moment on camera, and the image has since been shared thousands of times.

Many people have written to say how touched they were by the image and Tyrone’s actions.

“Makes me want to cry,” said Diana DelMar Miller. “We need love and compassion. This is the time where God is testing us to see if we can come together and move forward as one race or keep going backwards as we seem to have done in the past. I pray that all of us can stop the hate and start to love again.”

“Your husband is absolutely a hero!” wrote Sarah Campanie Badgley. “Thank you!! I’m sure that officer needed him more than your husband would ever know…thank you for sharing a beautiful moment when we need it most.”

At a time when there is so much hate and violence sweeping through the country, we need more moments like this one.

“This is what God is about,” Ashley wrote. “#breakthehate.”

Were you touched by this healing moment between Tyrone and the officer? So share this!