Birth Mom Names Restaurant After Son She Gave Up For Adoption, 57 Years Later He Finds Her 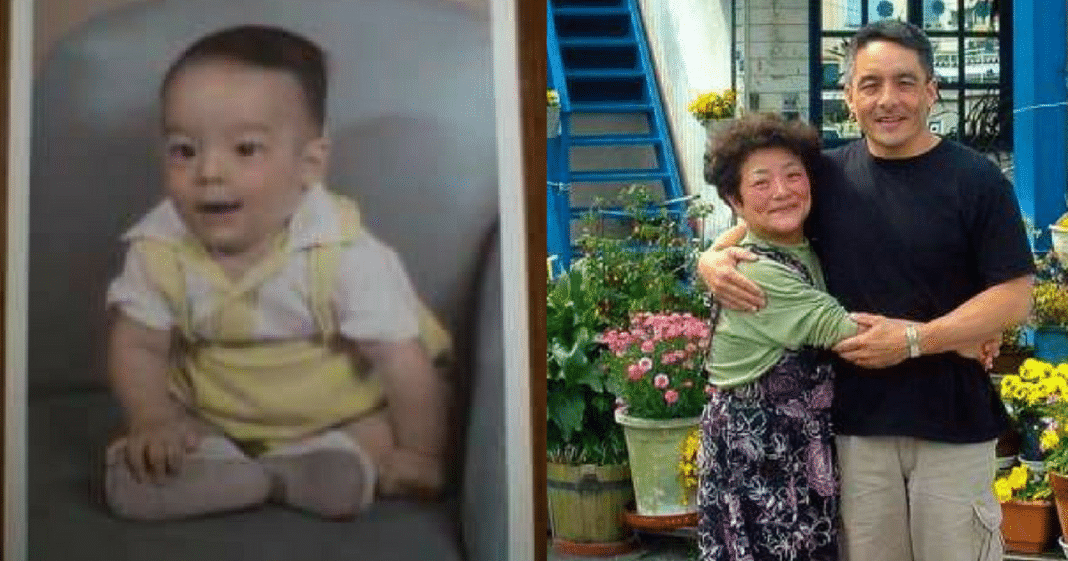 In life, timing is everything. Understandably, the decisions we make when we reach a fork in the road might be different when we are in our 40s as opposed to when we were 20. We can only hope that whether we choose to go left or right leads to growth rather than regret.

This fork in the road scenario is where Bruce Hollywood, 57, found himself after recovering from a heart attack. Suddenly, he felt the time was right to do something that he had never felt the desire to do.

Bruce was born in Japan during the 1960s but was given up for adoption. Happily, an American couple who was stationed with the U.S. military decided to adopt him and take him back to America.

Even though Bruce’s adoptive parents were always open to him meeting his biological mother, it was something he rarely thought about. He had always been fine with being adopted and even turned down his parent’s offer to fly him out to Japan to meet her.

Then all of that changed when he suffered a heart attack at the age of 44. Meeting his birth mother suddenly shifted to the top of the list. First, Bruce contacted the Japanese Embassy, then the U.S. Embassy in Tokyo, but didn’t have any luck. He also hired a private investigator but still, nothing turned up.

Finally, after several months, he got a call from the Japanese Embassy. They had good news; his mother, Nobue Ouchi, had been located. Bruce called her that very day and they were able to speak for the first time through an interpreter.

The interpreter informed Bruce that the following day was his mother’s 65th birthday and all she had ever wished for was his return. She also explained why Nobue had never married, “because she said in her heart there was only room for one man. And it was you, and she knew you would be back.”

Bruce also discovered that his birth mother owned a restaurant which she had named after him. Prior to returning to America, his adoptive parents took Nobue a baby photo and told her they’d named him Bruce. “And I thought, ‘This is either the most incredible story I’ve ever heard or this woman is crazy, and these things aren’t true’,” he recalled.

Ten days later, Bruce was on an airplane to Japan to meet his biological mother face to face. Everything she had told him about his adoption and the restaurant turned out to be true. His father was a U.S. military man who had intended to marry Nobue but never completed the paperwork. He returned home to South Carolina unaware that she was expecting his child.

Now, when Bruce looks back at his decision to meet his birth mother, he believes it changed his life for the better. They became very good friends and traveled back and forth regularly to visit each other.

Air Force Col. Bruce Hollywood suffered a heart attack in the Pentagon parking lot as he arrived at work in pre-dawn darkness. In the ambulance racing to Walter Reed, two regrets popped into his head. One was that he wouldn’t be able to help his son with his college applications. The other was that he never thanked the Japanese woman who gave him birth — then gave him up for adoption by an American couple who could offer him a better life in the US. Surgeons saved Hollywood’s life. So he set out to find his birth mother, Nobue Ouchi, something his adoptive mother had encouraged him to do. He never felt the need, until then. Eventually, through a chance meeting with Admiral Harry Harris — who is the son of a Japanese war bride — and the help of Japanese Ambassador Ryozo Kato, she is found. They manage a phone conversation and he flies to Japan to meet her. She is overjoyed and so afraid of losing sight of him that when he goes for a run, she insists on bicycling along behind him. The American military man who was his birth father had started the extensive paperwork required to marry a Japanese before he was shipped home to South Carolina. He had said he would call right away. But it was many months later and Nobue refused to talk to him, believing he could not be trusted. He did not know she was pregnant. She knew it would be difficult for a mixed race child in Japan so she gave him up for adoption to Edward and Eleanor Hollywood. Before they left Japan, they told her they named the boy Bruce and promised to take good care of him. She never married, and ran a neighborhood bar/restaurant that she called “Bruce”. Bruce visited often and brought her to Washington. She started taking English lessons. He studied Japanese. They slow danced on a dinner cruise down the Potomac. Three years after their reunion, she died of a heart attack. For Bruce, finding his mother gave him a new-found identity as a Japanese American. Growing up he didn’t know about the internment of Japanese Americans during WWII. Today he serves on the board of the Japanese American Veterans Association and the National Japanese American Memorial to Patriotism in World War II.

When Nobue passed away three years later, the only regret Bruce felt was that he hadn’t met her sooner.