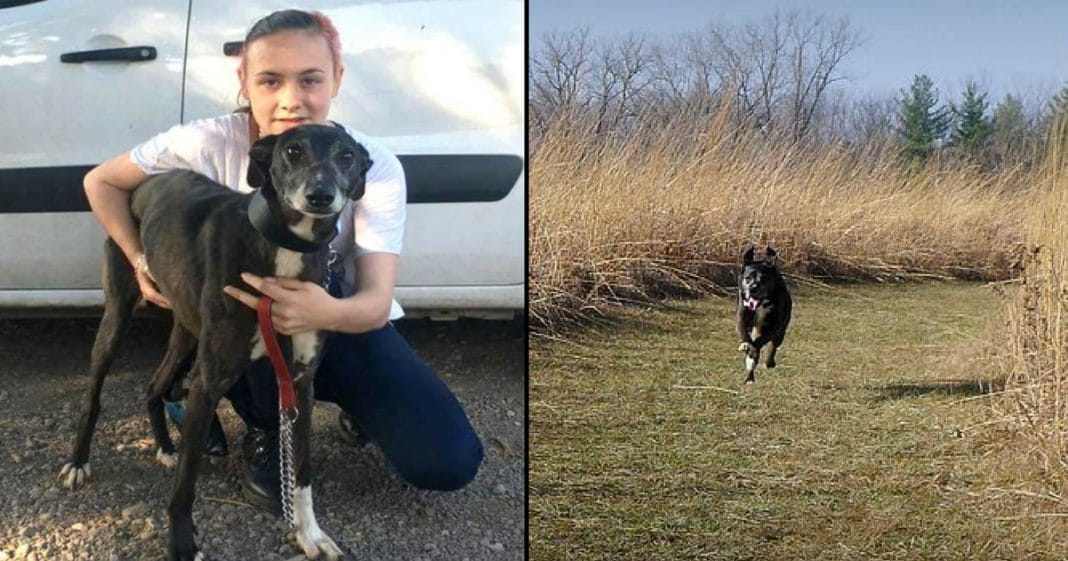 How long do you search and when do you give up hope when your dog is lost? Some people will go months without giving up, some maybe even a year. After exhausting all efforts, though, eventually you have to concede that your beloved pooch is probably gone forever.

Such was the case for Jessica Miller of Derbyshire, England, and her 4-year-old greyhound, Dasha. It was the summer of 2014 when Dasha suddenly went missing from Jessica’s backyard. Jessica created a Facebook page for him and also contacted the local authorities to report her missing dog, but no leads came and she lost all hope of ever finding her beloved Dasha again.

Fast forward three years. Jessica received a call from Officer Dave Poolton, a policeman 100 miles away in Herefordshire County, informing her that a local farmer had found a greyhound wandering down the road. When they checked the dog’s microchip, they found Jessica’s contact information.

“I genuinely believed I would never see Dasha again,” Jessica said. “I thought someone was pulling my chain when I got the call.”

“When I saw that the dog was last registered in Derbyshire several years ago, I naturally assumed that the microchip was out of date,” Poolton explained. “Nevertheless, I called Jessica, and the first thing she did was burst into tears.”

Wasting no time, Jessica rushed down to the station. “As soon as we had the call from Dave, I traveled straight down to Herefordshire to get Dasha and bring him back home,” she said.

Dasha hadn’t forgotten his owner. He was just as excited to see Jessica as she was to see him.

“He jumped up as soon as he saw me,” Jessica said, adding, “It shows how important it is to make sure your dog is microchipped.”

Jessica may never know what exactly happened to Dasha while he was gone, but some scars on his body suggest he had some trauma while he was away.

“We are not certain what happened to Dasha but he now has lots of scars and he didn’t have one before he was taken,” Jessica said. “He never really barked before either but he has this new aggressive bark.”

In those years that Dasha was away, all hope of his return dashed, Jessica got a new dog named Loki. Thankfully, Loki and Dasha get along great and have become fast friends.

Time may not heal all wounds, and the three years lost can’t be returned, but it certainly appears that things are looking bright for the reunited friends.

“He is slowly settling back in and still remembers lots of his old training,” Jessica said of Dasha. “It is just going to take some time.”

Were you amazed to see Jessica and Dasha reunited after so many years? So share this!