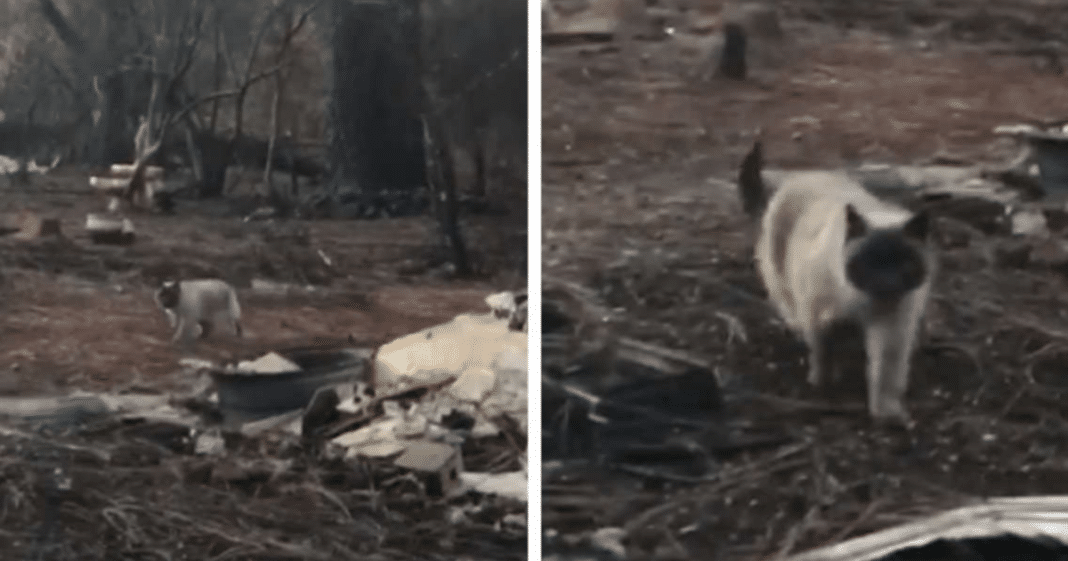 On November 8, Courtney Werblow realized the town of Paradise was going to be hit by the Camp Fire, which would become the deadliest and most destructive wildfire in California history. The blaze destroyed 14,000 residences and killed 85 people. Her husband was away and Courtney and her two kids were in a state of panic as a rain of ashes started descending around them. In the panic to evacuate, they had no time to find the family cat, Timber. Now, one month later, Werblow shared a video of hope amid a scene of apocalyptic ruin.

On the day of the fire, Werblow posted a picture as she made her way onto the roof to put a sprinkler in place. It was a last-ditch effort to save the house before she and her kids would flee for their lives. They made it out safely, but then had to confront the possibility that the home, like so many others, had been destroyed.

“The news our home has been burned down would be horrific but this heartache of not knowing is so difficult to go through. Praying for some answers for so many of us soon. ?”

That night, Werblow struggled to sleep, waking up every hour in a panic to check her phone for any updates. Many in the community would have no news for weeks on end. Werblow happened to know someone working to survey the situation and got the bad news later the next day. As tragic as it was, at least the uncertainty was over –the family home was burned to the ground.

“We were just notified that we lost our home,” said a tearful Werblow in a video on Facebook.

“I just wanted to let you guys know: We’re doing ok. We’re safe. Our family is safe. That’s what matters most, so…”

Update on our home

A few days later, Werblow got pictures of the horrible scene. There was almost nothing left. Even so, her child asked to see the photos and found hope that a big tree on the property remained standing amid the ruins.

“‘Mommy that’s good, at least we still have our big strong tree there’ its so amazing to see things through the eyes of your child. They have so much strength. It’s unreal to realize this is our home.”

“Mommy that’s good, at least we still have our big strong tree there” its so amazing to see things through the eyes of…

In the difficult days that followed, the family clung together, hugging each other to ease the pain. There were so many memories in the home and it was painful to let go. When it rained, Werblow felt like even the smallest remnants of the place were washing away in the ashes.

“I know we need rain but I’ve been so torn with my thoughts knowing that so many of our maybe small pieces of memories in the ashes will be washed away from where our home currently is ?”

They had no permanent housing, so a family friend created a GoFundMe page to help them start over. In the meantime, they longed for the feeling of a real home and tried to carry on. They didn’t know when they would finally be allowed to go the scene themselves. It could take months for all they knew. Werblow assumed her beloved cat was either long gone or had died in the fire.

Seeing images is part of the healing, unable to access our home for possibly months, I’ve never realized how beautiful…

After one month with no housing, Werbrlow was finally able to reach the homesite. That’s when out of the ashes she saw a familiar little face watching in the distance. Timber had somehow managed to survive alone and remained on the site. The loyal cat seemed to be in disbelief that her family had returned at last. Then she realizes it’s true, and they share a beautiful and touching reunion.

Like a furry pheonix rising from the ashes, Timber was much more than just a sight for sore eyes. She was hope that a new life was just beginning for the Werblow family. Paradise will start over, rebuild, and remain strong.

“NEVER LOSE HOPE! One month today since the fire, we received an escort to my parents property & my cat Timber was discovered!! She’s alive. Praise God!! ❤️”

NEVER LOSE HOPE! One month today since the fire, we received an escort to my parents property & my cat Timber was discovered!! She’s alive. Praise God!! ❤️To help our family in this time you can visit our gofundme at: https://www.gofundme.com/ParadiseFire-HelpWerblowFamilyOr read a little more on our story at: https://youtu.be/XAsiEwOsEkY