He Begs Pregnant Wife Not To Wear This Shirt. Then Fellow Mom Sees It, Breaks Down In Tears 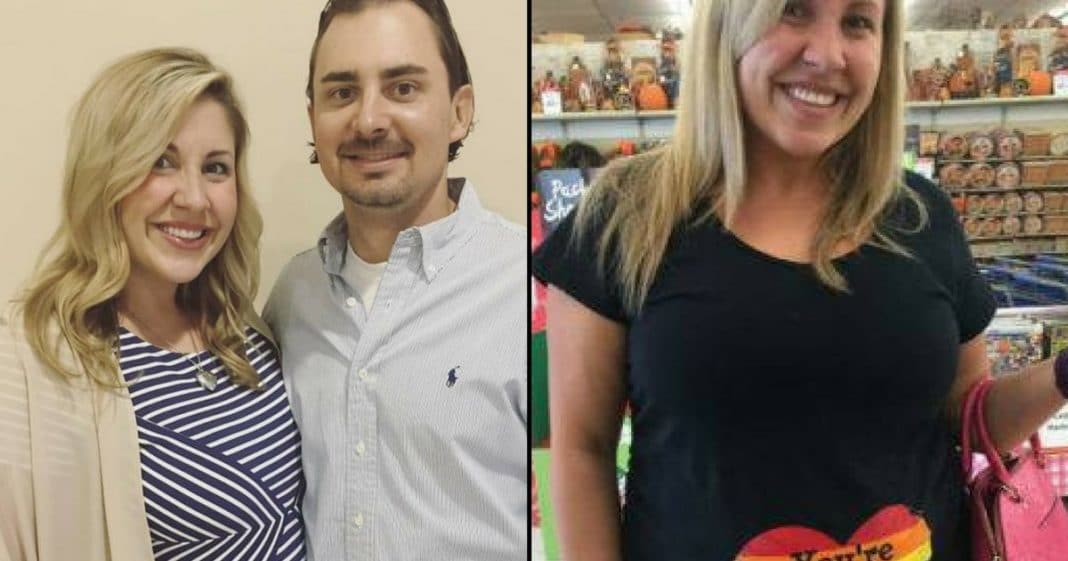 Losing a child to miscarriage can be one of the most heart-wrenching and overwhelming experiences a couple can face. The emotional trauma can either tear them apart or draw them closer together.

It’s usually something most choose to deal with privately instead of making their grief public. But one mother dared to share her grief – despite her husband’s initial wishes – by wearing a shirt that touched another mother so deeply it bonded the two women in a way only they could understand.

While on a trip to her local Hobby Lobby store, Autumn Safley received a few second glances. Autumn was expecting and she wore a tee shirt with a rainbow design. Emblazoned on the front was the slogan: “You’re looking at a rainbow!”

When observing Autumn and her tee shirt, most would think the ‘rainbow’ refers to the baby she was carrying. They’d be right. However, there’s more to this expression than many realize.

Autumn’s shirt was designed to call attention to “rainbow babies.” These are babies conceived by couples who have lost a child through miscarriage in the past.

The concept comes from the fact that this new child – the “rainbow baby” – is born after a time of turbulence and tragic loss. The new baby is a rainbow shining through after a storm.

For many couples, discovering they are expecting again can be emotionally trying as they deal with the fear that they could lose this child too; but for Autumn, it was a cause for celebration.

Her shirt served as a secret message between mothers who have suffered the tragedy of miscarriage. When Autumn wore the shirt that day, she never expected to meet another woman just like her, one who suffered the same loss, but she did, and their pain drew them together.

Courtney, a fellow shopper, was so touched by Autumn’s shirt that she couldn’t resist sharing it with her friends on social media. Courtney offered encouraging and inspiring words to Autumn and others suffering the same grief.

The post quickly went viral, touching many women who were in the same boat. The bond between the two strangers was so noticeable and visible and has helped others understand the sheer miracle of rainbow babies and how they are to be cherished, not hidden away.

Autumn’s rainbow baby, Jas, was born on December 7, 2016. What a beautiful blessing and special miracle. We are so happy for this sweet family!

Autumn and Courtney were both incredibly brave to come forward with their stories. Their unborn children will never be forgotten, even as their cherish their new little blessings.

Were you touched by Autumn and Courtney’s story as much as we were? So share this!