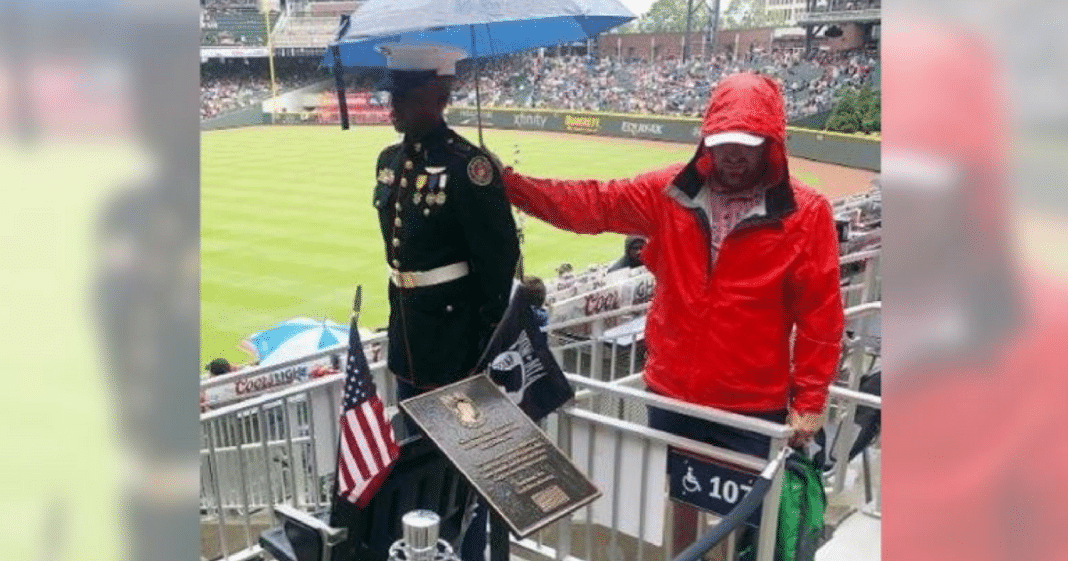 The Atlanta Braves shared a powerful image on Twitter of a baseball fan in a raincoat holding his umbrella over a Junior Reserve Officers’ Training Corps (JROTC) member at Suntrust Park in Atlanta. The touching moment took place at a rain-delayed doubleheader with the New York Mets on Memorial Day.

The photo went viral on Twitter, reaching over 19K shares as of this writing with the simple caption, “Respect.”

The JROTC member from Georgia’s Parkview High School was standing guard over the stadium’s POW-MIA Chair of Honor. The chair remains empty to honor those who became prisoners of war as well as those who went missing in action defending America.

A plaque next to the chair reads:

“Since World War I, more than 92,000 American soldiers are unaccounted for. This unoccupied seat is dedicated to the memory of those brave men and women and to the sacrifices made in serving this country. God Bless You. God Bless America.”

Some gave all. #MemorialDay pic.twitter.com/lygDsksoRz

Fans were taking a moment to recognize the chair when the man opened his umbrella to shield the JROTC member.

Another fan caught the moment from a different angle:

Video of the moment before the fan came forward with his umbrella was also shared:

It was a noble tribute to the lives lost defending our country on Memorial Day, made even more touching thanks to one baseball fan’s gesture.

See more in the video from WSB-TV below: