Autistic Boy Couldn’t Sit Through Haircut, Then Barber Makes Decision That Changes His Life…And Hers 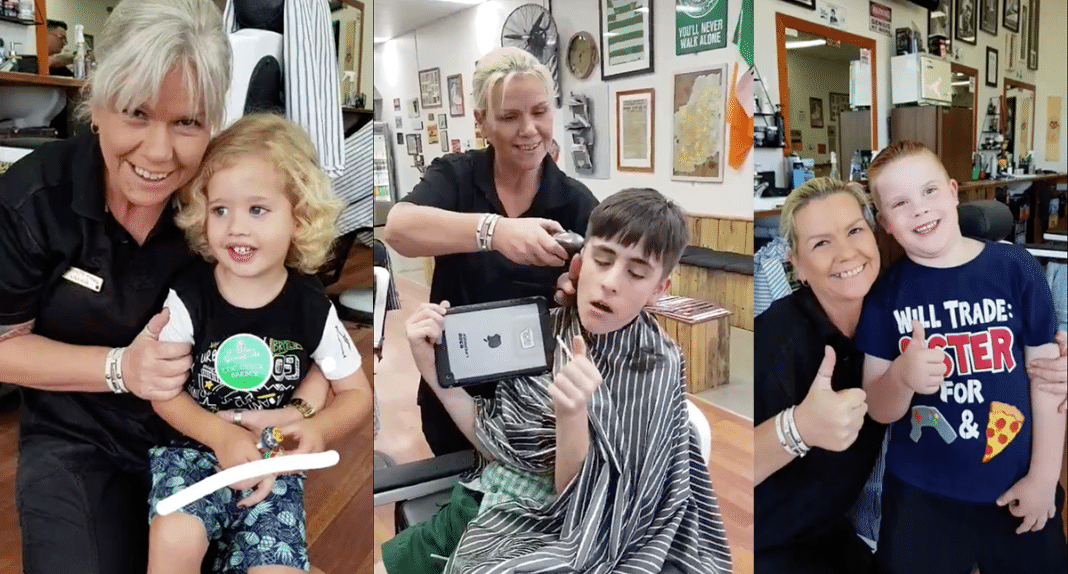 One barber, Lisa McKenzie seems to have found her calling as a “child whisperer” when she found a nervous and anxious autistic boy in her seat at the barbershop in Brisbane, Australia. The boy, Jordie Rowland, was distressed by the overwhelming sights and sounds of the busy shop, and just couldn’t sit still. There was too much sensory overload.

“You could hear his distress before you saw him,” barber Lisa Ann McKenzie told CNN.

With incredible patience, McKenzie worked to cut just a small patch of hair on each visit. Jodie would come back multiple times to allow her to continue with the haircut.

“At the very start, we would be lucky to get a half haircut done,” McKenzie said.

McKenzie went out of her way to accommodate the family by scheduling their visit when the shop was about to close. Then, she would dim the lights and soften the music in the shop.

Not even that seemed to help.

“It was four weeks before it looked like a normal haircut,” said McKenzie.

The situation wasn’t appreciated by the shop’s boss, who wanted her to keep up with five haircuts an hour and charge the boy’s parents for all the time she was spending. McKenzie didn’t think it was right to charge since the haircut wasn’t finished yet.

Just a few weeks later, Lisa opened her own shop. It would give her all the time she needed to help Jordie, and allow him to take his time and get used to the surroundings.

It was calming for him to explore the shop, and she was making progress, but the real breakthrough moment happened when she decided to start singing a particular song to Jordie.

“The wheels on the bus go round and round, all through the town,” she sang.

“He looked straight at me. It’s hard to describe but I felt like my heart exploded,” she said.

She was able to do the entire haircut, plus finish it off properly with styling gel.

“I finally after 18 months of building Jordie’s confidence and trust can get him through a complete haircut and I am even rewarded with a hug at the end! Love my trade and love making a difference,” she Tweeted.

McKenzie says the secret to haircuts for kids with autism is patience, understanding, and building a trusting relationship.

“I think as an industry, there is a huge gap here. We are barbers, and hairdressers need to do better,” said McKenzie.

She is definitely doing better, and in response, her customers travel from miles around to bring their kids to her new shop for their haircuts.

Lisa’s shop, the Celtic Barber now offers special appointments for autistic kids, which she calls “Superstar Sunday Sensory Sensitive Sessions.” She says she’s received thousands of messages about the service and is filling up her business quickly. Five other barbers help her, and they will cut hair on the floor while kids play with toys.

She considers the kids part of her “Celtic Barber family.”

Almost 100,000 views and thousands of messages later our superstar sunday sensory sensitive sessions are going to be very popular!! We have a waiting list for cancellations this Sunday and nothing then until May 19th which is filling up pretty quickly too. #celticbarber #autism pic.twitter.com/25SCx9tAtZ

” Love being able to cater for our beautiful misunderstood children with a closed shop and that one on one attention,” she Tweeted.

Look at all the happy faces in the videos below: