Baby Rhino Shot By Poachers, But Wait Till You See Who Shows Up After… 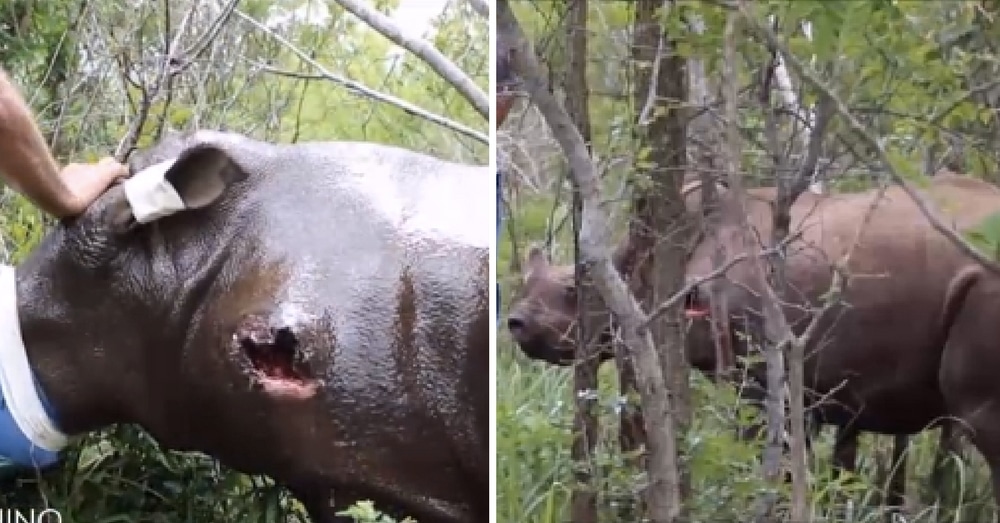 After being shot by and escaping from the same poachers who killed her mom, an injured and orphaned 10-month-old female rhino was rescued and brought to a rhino sanctuary after an eight-day search across a private game reserve outside of Kruger National Park in South Africa.

The calf suffers from a fist-size gunshot wound to her left shoulder, says Albertus Coetzee, a veterinarian who was part of the rescue. The calf is currently recovering at the Care for Wild Rhino Sanctuary, a nonprofit organization that takes care of and rehabilitates injured, orphaned, and/or abandoned rhinos.

The calf’s long-term prognosis is said to be good, and the center’s owner, Petronel Nieuwoudt, says the recovery should take around one month.

“We are sitting with her, we are feeding her,” Nieuwoudt says. “She is walking around and drinking water.”

The calf is receiving feedings several times a day, including at 2 a.m. and at 5 a.m.

The management team at the private game reserve contacted the sanctuary to aid in the rescue after the mom had been reported poached, says Gary Schneider, director of the advocacy and volunteering group Working With Rhinos. After the team heard about the shooting they began looking for the baby in the reserve.

Trackers had found the calf’s tracks, which gave the team an idea where she might be, but unfortunately rain washed most of them away, says Schneider, who filmed the rescue. It took eight days for the team to find the baby rhino.

See what this baby rhino’s rescuers did next at National Geographic.