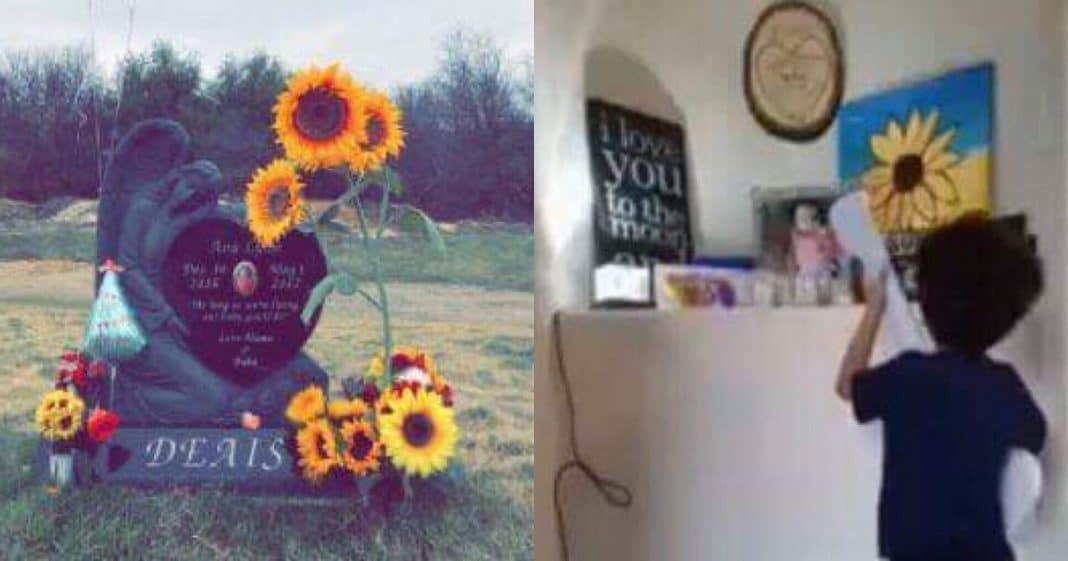 A 4-year-old boy’s sweet tribute to his late sister has captured the hearts of millions on social media. the Deais family suffered a tragic loss last May when their 4-month-old baby girl, Ava Lynn died of complications from hydronephrosis, a disease that affects the kidneys and bladder.

On December 30th, Deais posted a video on Twitter that has since been viewed over one million times. Alexander is Ava Lynn’s older brother. In the touching serenade, the little boy is strumming his toy guitar while singing the song Remember Me from the Pixar film, “Coco.” Alexander is standing before a shelf crowded with memorabilia dedicated to his little sister.

Deais said that his son: “just wanted to sing for her and make sure that she is remembered and loved by our family forever.

“He’s only 4-years-old, and he understands,” Deais wrote in his Tweet. “He didn’t even know he was being recorded. He just wanted to sing to her for her 1st birthday!”

Many of Disney Pixar’s films are tailored to help little children understand complicated topics. The Deais family was deeply moved after seeing it in theaters. The film, which touches on Dia De Los Muertos, brought them to tears. It follows the journey of a young boy as he seeks to find his great-grandfather in the Land of the dead. Deais said the film helped Alexander find a connection with Ava Lynn.

“(Alexander) understands that she has passed and is in heaven, he has seemed to grasp onto the reality of it in a sweet and innocent way a 4-year-old should when it comes to passing away,”  Deais said. “And we have Coco to thank for that.”

Social media responded to Alexander’s precious tribute. One person wrote: “I vowed not to shed a tear in 2018. And here we are first day of the new year  and my eyes couldn’t hold back.”

There is some good news from the deais family. Samir and his wife are expecting another baby. They’ve named her Stella Grace. Alexander was overjoyed with the news. He can’t wait to be a brother again.

Samir broke the news on Twitter: “After every storm comes a rainbow” My wife and I are proud to announce the newest addition to this family. Stella Grace Deais #RainbowBaby.”

With every storm comes a rainbow. Love and light prevail after the darkness disappears. We’re delighted for Alexander and his parents and hope you are too.