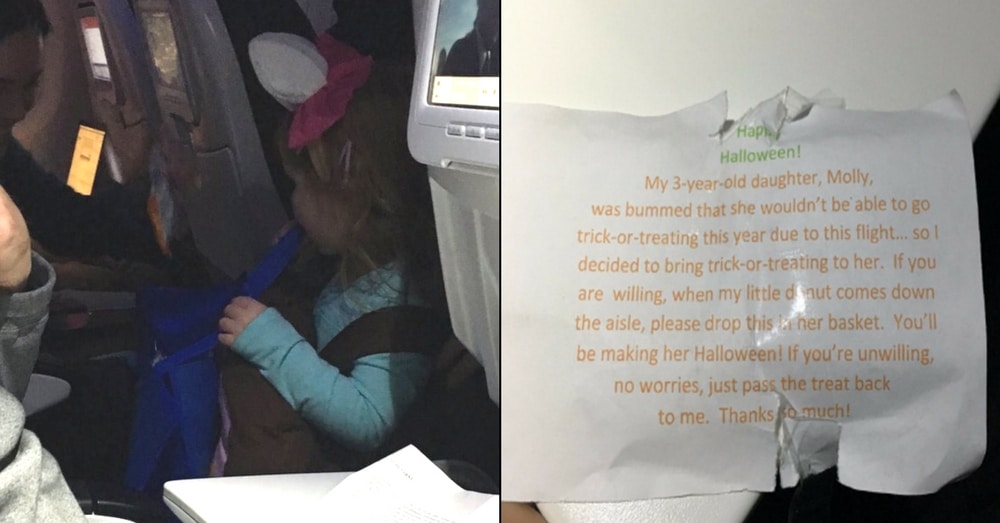 Missing Halloween because you’re stuck on a plane is no way to live. Thankfully, a 3-year-old named Molly has a dad who thought the same thing.

Passenger Stephanie Kahan, who was on the same flight from Boston to San Francisco, noticed Molly’s dad handing out candy to passengers on the plane, along with a note explaining why.

It read, “My 3-year-old daughter Molly was bummed that she wouldn’t be able to go trick-or-treating this year due to this flight…so I decided to bring trick-or-treating to her. If you are willing, when my little donut comes down the aisle, please drop this in her basket. You’ll be making her Halloween! If you’re unwilling, no worries, just pass the treat back to me. Thanks so much!”

Father of the decade? Kahan tweeted both a pic of the note and one of Molly (doughnut costume and all) making her way down the aisle.

OMG, my heart is exploding right now. Dad of the year just passed out candy to everyone on the flight so his 3 year old could trick or treat pic.twitter.com/vfsAcYNrhr

Read more about this “Father of the Year” contender on E! News.