Mom Fears For Autistic Son Every Day. Then She Sees This Photo And Can’t Stop Crying 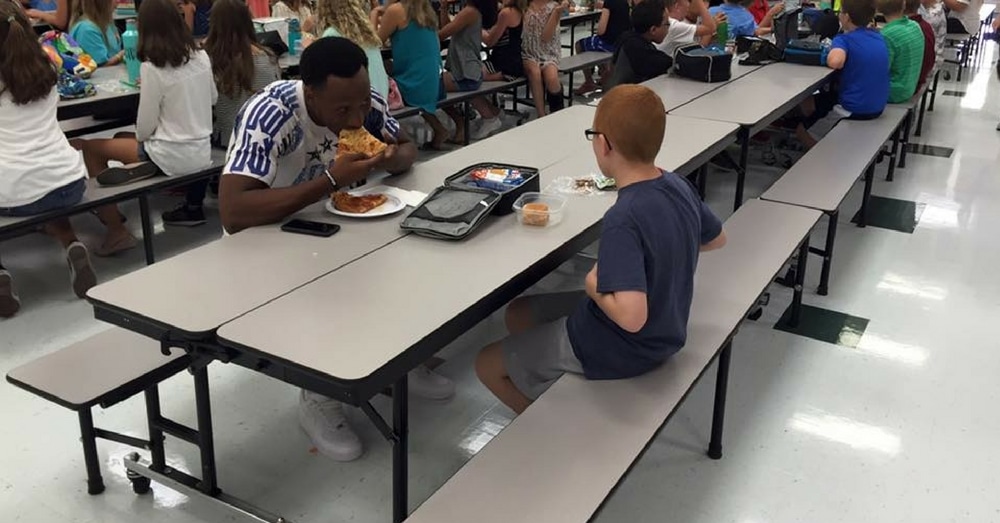 When Florida State University wide receiver Travis Rudolph saw a boy sitting by himself at lunchtime, he asked if he could join him. He had no idea that one simple act would become a national story.

Some members of the FSU football team was visiting the students at Montford Middle School in Tallahassee, Florida. As the kids sat down in the cafeteria for lunch the players were told to go around and introduce themselves.

Travis noticed a young boy, Bo Paske, who was eating his lunch all alone. He grabbed a slice of pizza and asked if he could sit with him. “Sure. Why not?” Bo replied.

Travis sat down and the two of them began to talk.

What Travis didn’t know is that Bo has autism and he eats alone most days. Someone at the school noticed their sweet interaction, snapped a picture, and sent it to Bo’s mom, Leah Paske.

At first Leah didn’t know who it was in the picture with Bo, but as soon as she found out she began to cry. She posted the photo on Facebook along with a note about how much she worries about her son at school and how grateful she is for Travis’ kindness.

“I have feelings of anxiety for [Bo], and they can be overwhelming if I let them,” she wrote, adding that she asks him every day who he ate lunch with, and it always breaks her heart when the answer is usually “no one.”

“I’m not sure what exactly made this incredibly kind man share a lunch table with my son,” she continued, speaking about Travis, “but I’m happy to say that it will not soon be forgotten. This is one day I didn’t have to worry if my sweet boy ate lunch alone, because he sat across from someone who is a hero in many eyes. Travis Rudolph thank you so much, you made this momma exceedingly happy, and have made us fans for life!”

When Travis read Leah’s note he also began to cry. He had no idea what kind of an impact his small gesture of kindness would have, but he’s glad that he was able to make a difference.

“I was just a kid not too long ago and I remember what the impact was of guys that played in college and in the NFL coming back to us,” he said. “So I feel like maybe I can change someone’s life or I can make someone a better person or make someone want to be great or be like me, or even better.”

After hearing Bo’s story, Travis even gave him his cell phone number so the two of them can chat any time. Now that’s the kind of man we want being a role model for our kids!

Were you touched by the kindness Travis showed Bo? So share this!