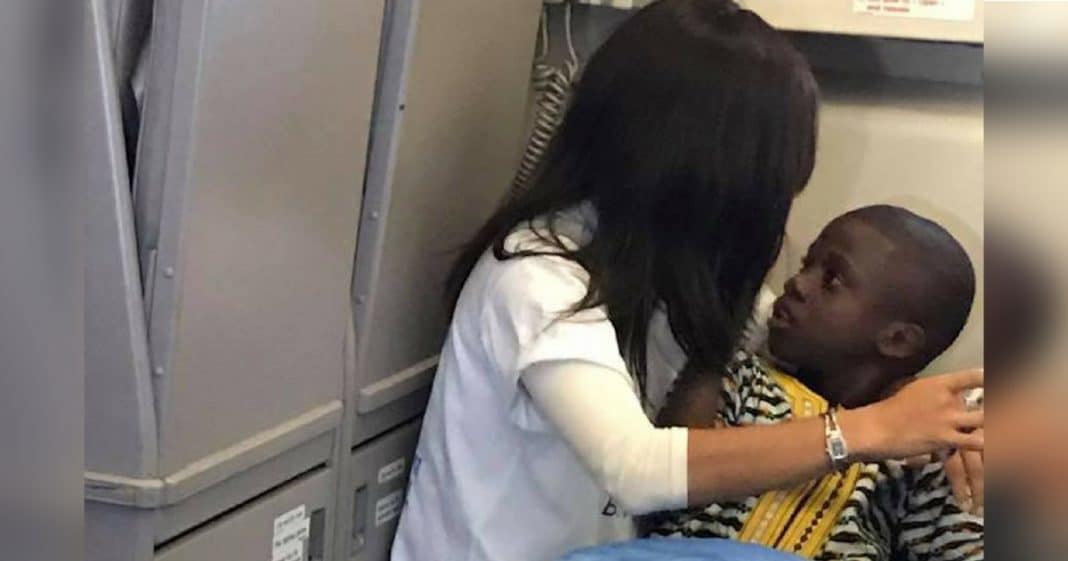 Rabbi Bentzion Groner and his wife Rochel were one hour into an eight-hour trip home to North Carolina from Israel when a young boy with autism had a meltdown.

“His cries were heard throughout the plane and you could feel the tension among the other passengers. No one wanted to say anything but it was getting very uncomfortable,” Rabbi Groner wrote in a Facebook post.

It just so happens that the Groners direct an organization called ZABS Place, an employment-training center for young adults with disabilities, so Rochel has had a lot of experience with people like this child and, while many of the people on the plane were annoyed, she had compassion for him.

She approached the child, who was sitting with his mother. “There were tears streaming down his face,” she recalled. She guessed that the boy was autistic based on how he was acting.

“I put out my hand, and he took my hand,” she said. “It was such a surreal moment, and he just took it, and he stopped crying. He kind of just followed me into the aisle. I walked to the bulkhead, and I sat down and I put him in my lap, and I gave him a gentle but firm hug and I just started to rock him. He calmed down.”

So we just flew back from chaperoning an amazing trip thanks to MAYANOT: Taglit-Birthright Israel. The connecting flight…

For the next two hours, Rochel kept the boy occupied by drawing with him, tracing their hands on unused nausea bags, and letting him play with her phone.

“It was beautiful to see. It was incredible, the transformation. Whatever had been bothering him wasn’t bothering him, he was in a better place,” she said.

This story is such a simple and beautiful illustration of how one caring person can change the life of not just one individual, but a whole group of people. The little boy, his mother, and the other passengers on the plane witnessed a stressful atmosphere changed to a peaceful setting all because of the compassion displayed by one caring lady who decided to do something to help.

If only more people could be like Rochel – showing understanding, kindness, and compassion instead of annoyance and anger – the world would be a much better place.

Were you touched by Rochel’s beautiful display of compassion? So share this!