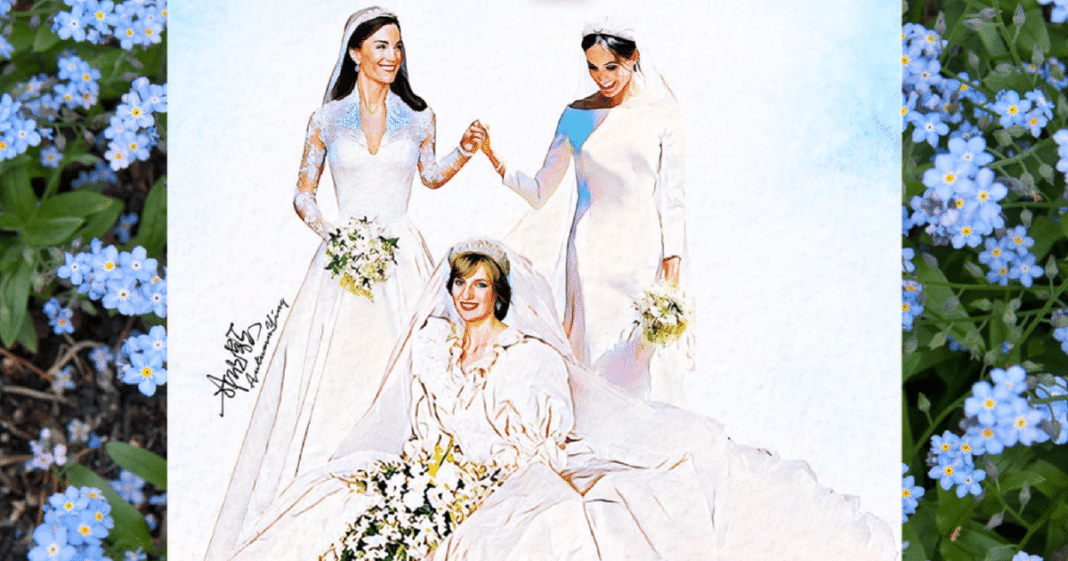 The royal wedding on Saturday was almost perfect in every way, except for one noticeable problem: Princess Diana couldn’t be there to see it in person to share in her son’s joy. That’s where artist Autumn Ying comes in.

An upcoming fashion illustrator, jewelry designer, and graphic designer was the perfect person to help us all see it. She is inspired by bringing fairytales to life, which take place “in worlds in which anything is possible.”

Although the late Princess of Wales was certainly there in spirit, and honored by many tributes throughout the wedding, now we can visualize it through Ying’s dreamy illustrations on Instagram.

In the first illustration, we can see four princesses in their bridal attire together: Princess Diana, Catherine, Duchess of Cambridge, Her Royal Highness The Duchess of Sussex, Meghan Markle, and Princess Charlotte.

✨#yingfashioncanvas ✖️#RoyalWedding In that fleeting time together with you, I found love of a lifetime. • Here comes the joyful version of the royal family which I would like to express the family bonding that’s precious ? Thanks for the overwhelming responses for the #RoyalWedding artwork over these two days! I’m truly blessed and touched at the same time because to majority, I’m just new to you and yet you guys took time and effort to encourage me and some of you even took approach to ask for credit for those reposts which didn’t tag me. Thank you for being so kind with all the lovely gestures. • It’s the encouragements given by all of you that lead me till this far. And I think it’s time to give back to this world. I will be preparing art prints for this #RoyalWedding series for you after receiving all the requests. While for every art print purchased, the amount will be donated to UNICEF, in hope of helping the children in need out of malnutrition in Cambodia ???????? • The world needs all the love it can get. Every single kind gesture will spark hope and make a difference, and I believe that the world does response, right? ? • #surrealart #princessdiana #katemiddleton #meghanmarkle #princesscharlotte #fashionillustration #lovelife #thecreativehive #and_draw_something #drawadot #yingfashioncanvas

In another illustration, Ying shows Princess Diana underneath the joined arms of Kate and Meghan.

✨#yingfashioncanvas ✖️#RoyalWedding I’ve always found that home is simply a matter carrying it with you. • While Princess Diana won’t get to see both her daughters-in-law in reality, I’m thinking of visualising this scene as a touching tribute to the late mother of Prince William and Prince Harry ??? • #surrealart #princessdiana #katemiddleton #meghanmarkle #fashionillustration #lovelife #thecreativehive #and_draw_something #drawadot #yingfashioncanvas

Finally, in the illustration below, we can see a more casual Prince Harry, whose official title will be His Royal Highness The Duke of Sussex, and his new bride creating a new world inside a royal snowglobe.

✨#yingfashioncanvas ✖️#RoyalWedding So come with me, where dreams are born, and time is never planned. Just think of happy things, and your heart will fly on wings, forever, in Never Never Land. • I just can’t stop smiling while watching back at the clips of Prince Harry’s besotted expression as he laid eyes on his beloved wife throughout the whole wedding ceremony. The way he looks at her as if her smile is the only thing that could possibly matter ? • #surrealart #royalcouples #princeharry #meghanmarkle #fashionillustration #lovelife #she_saidyes #thecreativehive #and_draw_something #drawadot #yingfashioncanvas

The artist says she will be selling prints of the illustrations, and proceeds from every print purchased will go to help children in Cambodia.

Princess Diana would no doubt approve:

“I knew what my job was; it was to go out and meet the people and love them.” -Princess Diana #Cambodia pic.twitter.com/HibDgYEd3G

In fact, Princess Diana worked to raise awareness about the need to remove deadly landmines in countries like Cambodia, walking through an active minefield in Angola on Jan. 15, 1997. She detonated a mine in front of an audience of international reporters, with the help of a land mine removal expert.

The trip that would help her earn her the title the People’s Princess, and lead to an international ban on landmines.