Army Vet Surprise From ‘The Rock.’ Then She Turns Around And Almost Passes Out 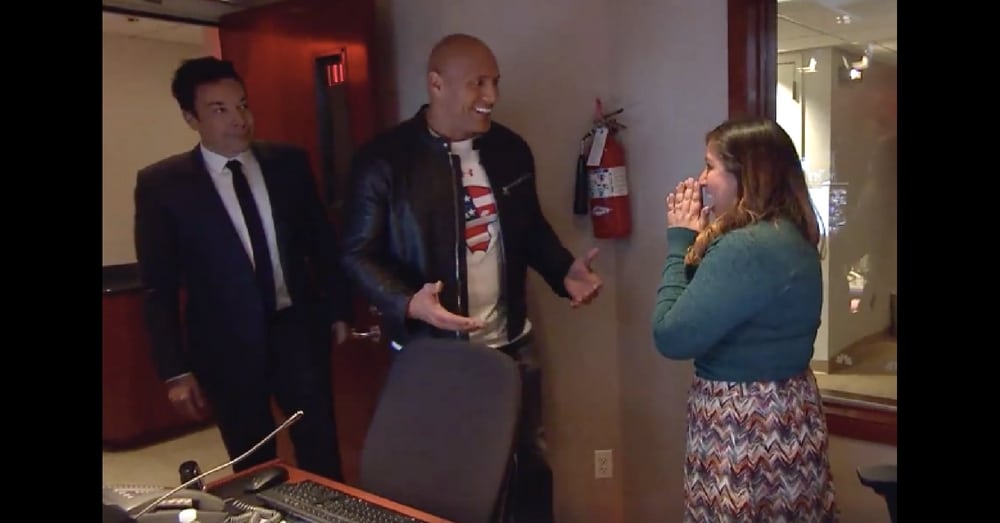 Dwayne “The Rock” Johnson is one of the most beloved celebrities in Hollywood. Despite his massive success and intimidating frame, the actor clearly has a good heart and loves to do nice things for his fans.

On a recent visit to The Tonight Show, Johnson was talking to host Jimmy Fallon about how much he values and supports our troops. He said he loves giving back to them to show them just a small amount of appreciation for the enormous sacrifices they have made.

He then proceeded to tell Fallon that he wanted to help a veteran who was there that night. The two of them searched through the audience, but they couldn’t find the person Johnson was looking for.

The pair then headed into the control room where they were met by Fallon’s very surprised and confused producer, Karina.

Karina is an Army veteran who met her husband Todd, a Master Sergeant in the Air Force, while they were both deployed in Iraq.

While Karina is now back in the States, Todd has been deployed and was going to be gone for the holidays.

After hearing what an amazing person Karina is, Johnson decided he wanted to do something special for her. When she saw what it was she could barely hold it together!

Click below to see what Johnson’s incredible surprise was!

When Karina saw Todd standing behind her she couldn’t believe her eyes! This is one Christmas present neither one of them will ever forget!

Did you love seeing what “The Rock” did for this military couple? So share this!