Amtrak Worker Can’t Believe Eyes When He Sees Elderly Vet’s Hat. What He Does Next Is Going Viral 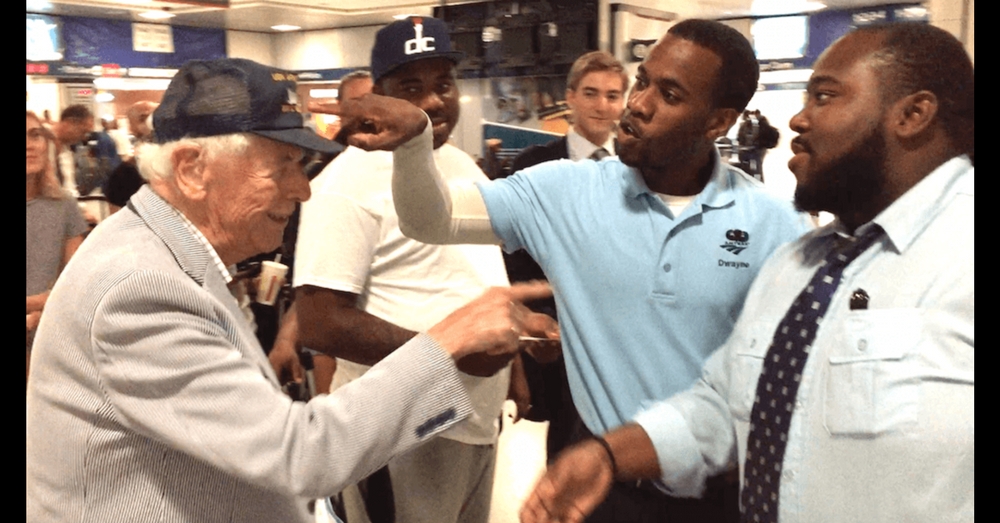 Recently, as passengers at New York’s Penn Station waited for their late-night train, one of the young Amtrak workers noticed an elderly man standing alone in line. What he did next will bring tears to your eyes.

The Amtrak worker, Dwayne, saw that the man was wearing a hat that said, “USN (United States Navy) Armed Services, WWII Veteran.” Without hesitation, he went over to the man to tell him how honored he was that he would be riding the train.

The 99-year-old veteran, whose name is Ed, was on his way back to his hometown of Baltimore. There was a sign around his neck that said he was mostly deaf, so Dwayne made sure he spoke loud enough for the man to hear him.

First, Dwayne brought Ed to the front of the line, then he called over some of his coworkers, telling them to shake Ed’s hand and thank him for his service. Dwayne then led everyone in the waiting area in a round of applause.

“My man, thank you so much. You paved the way for me,” said Dwayne, who is in the service now.

When the train finally came, Dwayne escorted the WWII veteran down the escalator so he could board the train first.

The look on Ed’s face as he was given the honor he is due is enough to soften the hardest heart and shows just how much Dwayne’s actions meant to him.

What Dwayne did that night is an incredible reminder of the respect and honor all of our soldiers and veterans deserve. Hopefully, more will follow in his footsteps.

Were you touched by what Dwayne did for this WWII veteran? So share this!