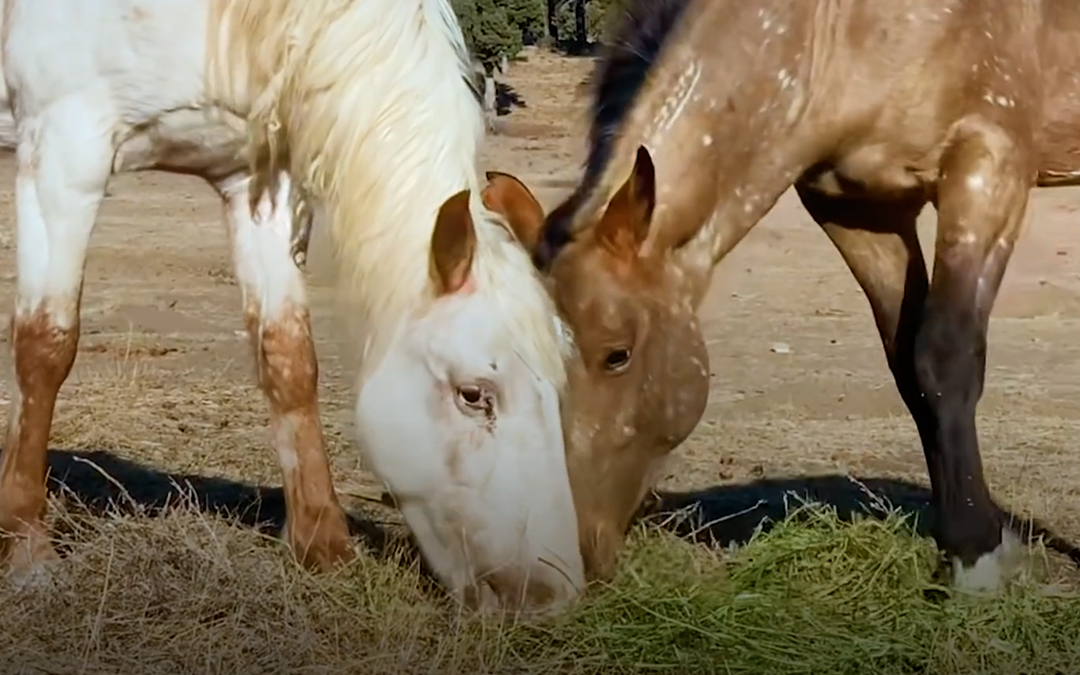 An American Mustang torn apart from his family is reunited after years apart: a true horse love story.

In a video from the Dodo, a wild American Mustang Phoenix hears his beloved mare named Ghost after years of separation. Their story highlights the incredible family bonds that horses share and the need to protect wild horses in America.

The Skydog Ranch and Sanctuary save American Mustangs from potential doom. Their Oregon location is a forever home for over 100 wild horses and 30 wild burros. There, they rescue animals from all kinds of situations, including kill pens, auctions, slaughterhouses, and abusive homes. Then, the wild horses can roam on thousands of acres while receiving the care they require.

Giving Back an American Mustang His Freedom

Skydog Ranch founder Clare Staples first spotted the Appaloosa American Mustang, Phoenix, in a photograph. There, he was fiercely jumping a metal fence, suspended in midair. After he cleared the fence, he could have run away, but he stayed nearby looking for his family and was recaptured. In the roundup, he was separated from his girlfriend and herd.

Staples had never seen anything like the photos of Phoenix and knew she had to find and adopt him. In one picture, she saw him running with a white mare. Although she wanted to adopt them together, she couldn’t find her.

Searching for His Lost Family

Efforts to rescue Phoenix took a full year. Finally, they took him by trailer to his new forever sanctuary home. When he arrived, he was initially overjoyed, rolling in the grass.

“When a horse rolls over three times – and he did it four – is an exceptional horse,” said Staples.

However, after settling in, the American Mustang wasn’t bonding with the other horses. Instead, he seemed listless and scanned the horizon as if searching for his lost family.

“I always felt like there was a little bit of loss with him,” said Staples.

It seemed that Phoenix was pining away for his herd but hopeful they might reappear at any second.

A Ghost Appears and the Incredible Reunion

After two years, a contact alerted Staples that a white mare was available. Comparing the photos to the ones with Phoenix, she was sure she had found his missing family.

“It was like seeing a ghost after two years of looking for this horse, so that’s where she got her name,” she said.

Finally, she could reunite Ghost with Phoenix!

Ghost arrived on the ranch, and they opened the gate. Then, Phoenix heard Ghost whinnying and came running over the hill to see her, calling for her as he ran. Then, there is an incredible loving reunion that you have to see for yourself.

See the video from The Dodo below:

After The Dodo shared the story, the video went viral, reaching 13 million views in one week.

“Seeing these two together today makes my heart so happy. Phoenix and Ghost – a love story for the ages,” the Skydog Ranch shared on social media.

“For me, the real joy of this is how many more people around the world are discovering the plight of American Mustangs and wanting to help. The more we do to raise awareness, the more people can speak up for them. Phoenix and Ghost are living proof of the family bonds these wild horses have, and more and more people are reuniting these families – other sanctuaries and rescues as well as horse-loving people,” they wrote on Instagram.

In another video, they show Phoenix and Ghost walking together in the snow with fluffy winter coats.

“To see Ghost gallop out of the trees with the light from the setting sun on her snowy coat is a memory I will cherish. This is the happiest of reunions, a wrong made right, a love story with the best ending. It’s exactly the way it was meant to be, and we are so lucky and blessed to get to witness such happiness and joy,” the post states.

American Mustangs make close family bonds and love one another. They can be incredibly loyal, showing an intense bond with their herd.

Sometimes, horses can surprise people when they mourn the loss of loved ones. For example, a horse named Sereno publicly mourned the loss of his cowboy caretaker in Brazil.

In another case, a giraffe gave goodbye kisses to a zookeeper with terminal cancer. Animals like these deserve to be saved from threats imposed by humans in their natural environments.

For more information about saving American Mustangs, see the Skydog Ranch. Today, they hope to help pass The Safeguard American Food Exports or SAFE Act. If passed, it would permanently ban horse slaughter in the U.S. and end the export of horses for slaughter abroad. In 2018 the SAFE Act had 237 bi-partisan co-sponsors, yet it never made it to the floor for a vote.

See another Wild Mustang reunion from Skydog Sanctuary below: