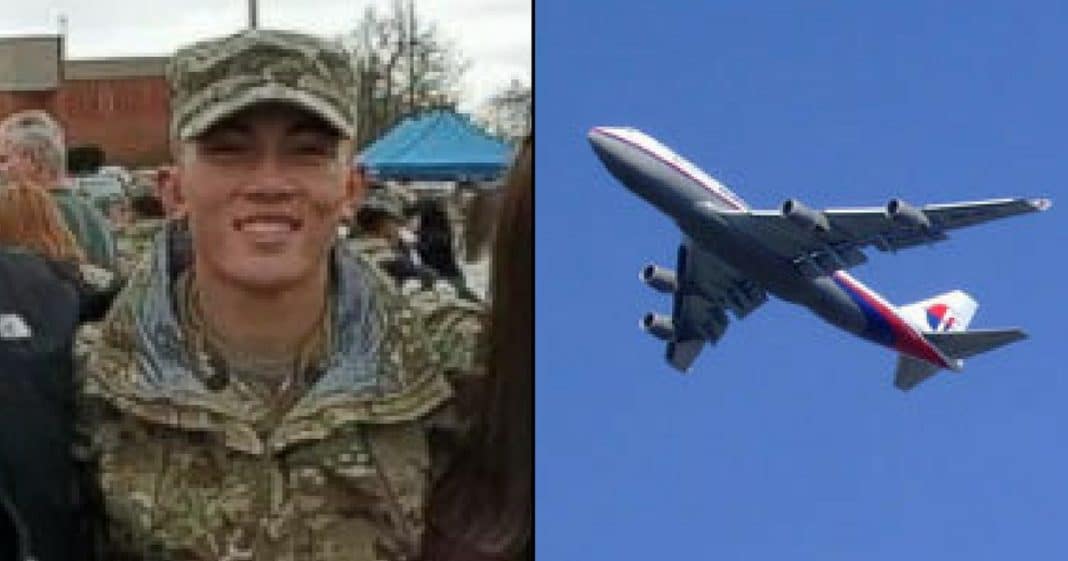 Our military sacrifices so much for us, and what they give is hard to repay. That’s why we love it when we see people going out of their way to show respect and care for our men and women in uniform.

Keaton Tilson, a 19-year-old U.S. Army soldier, has been stationed at Fort Hood in Texas and hadn’t been able to see his family since Christmas. He was hoping to go home for the Memorial Day weekend, but the approval hadn’t come through.

Then, the night before he wanted to leave, the approval came in. Because it was so late, though, he had to fly standby for his trip back to Illinois.

It didn’t seem like going standby would be a big deal, but seats kept filling up and Keaton kept missing flights. He ended up being at the airport for two days, getting more and more desperate and more and more disheartened.

“It looked good at first,” Keaton’s mom, Jennifer, said. “There were open seats. Then something happened, and he kept missing flights and missing flights.”

Luckily for Keaton, an angel in disguise swooped in to help.

Fellow traveler Josh Rainey was watching Keaton and, while he didn’t know just how long the young soldier had been waiting, he did notice he wasn’t having much luck getting on a flight. He decided he would give his seat to Keaton and just catch a later flight.

When he told the gate agent what he wanted to do, though, she told him that was impossible because Keaton’s name wasn’t the next one on the standby list.

Josh knew he couldn’t just leave things, so he called his wife and did something Keaton never expected.

“We agreed both that it was the right thing to do to go back and buy the ticket,” Josh said.

He ended up purchasing a $341 one-way ticket to St. Louis, Missouri, so Keaton could be reunited with his family. The grateful soldier was dumbfounded.

“He called back a few minutes later all choked up and said, ‘Somebody just bought my ticket,’” Jennifer recalled.

Even though he hadn’t planned to purchase another ticket when he first walked up to the counter, Josh knew without a doubt that it was the right thing to do.

“I didn’t go over there thinking I was going to buy a ticket,” he said, “but it didn’t look like he just wanted to go home, it looked like it was for a reason.”

“He shook my hand and walked away and then came back and asked if he could give me a hug,” Josh added. “Getting a hug from him was the most payment I could’ve gotten.”

The kind-hearted traveler insisted his act of kindness wasn’t that big of a deal compared to what Keaton has given for his country.

“He has chosen to give up at least the next four years of his life,” Josh said. “He got the week off. Instead of choosing to travel or see another country, he had to get home to his family.”

Thankfully Keaton made it home in time to spend Memorial Day with his family. While his mom knew he was coming home, it was a surprise for the rest of the family, and Jennifer captured the moment his siblings saw him for the first time in an emotional video.

When Josh and Keaton were talking in the airport, Keaton learned that Josh lived close to his family and they had a mutual friend. After Keaton got home, Jennifer used that information to track Josh down and thank him for what he had done.

“I told him how grateful we were,” she said. “He just knew it was the right thing to do. His dad was in the military for 30 years.”

Josh insists his actions that day weren’t that extraordinary and said he just hopes what he did will encourage others to go out of their way to help members of our military.

“If people get anything from this, I hope it’s just that they recognize that people in uniform, even though it’s their job to help and serve others, they sometimes need help too,” he said.

Were you touched by what Josh did for Keaton? So share this!