Age 71 Man Prayed To Find Love Again, Had No Idea His Answer Was A Secret Admirer Sitting Nearby 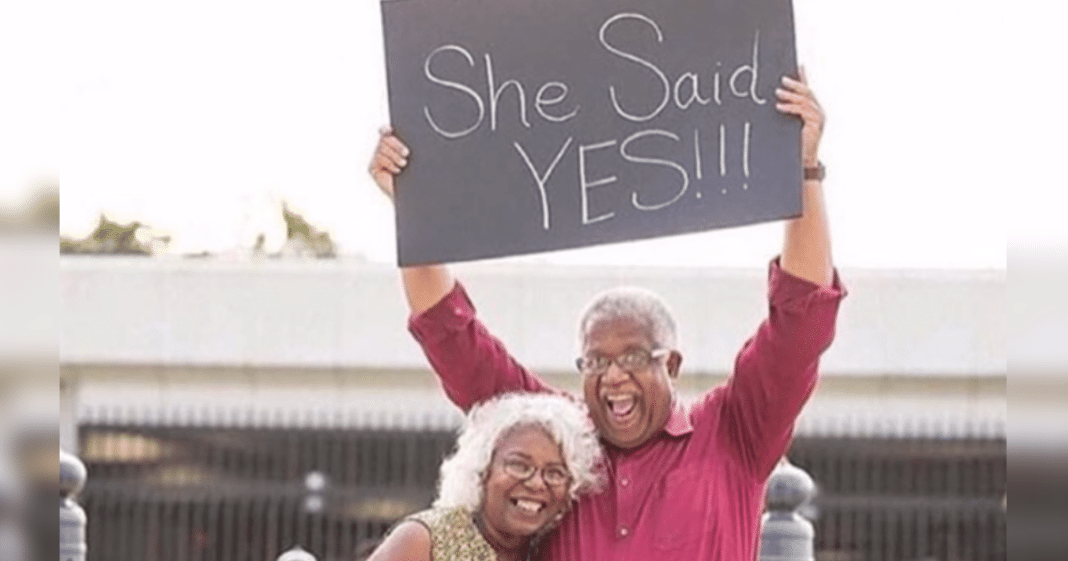 When Murphy Wilson, 71, lost his beloved wife of 41 years in 2013, he wasn’t sure he would ever find love again. After years went by, the Huntsville Alabama churchgoer started praying that God would bring true love back into his life again. Little did he know, the answers to his prayers was sitting nearby at his church. A woman with a secret crush was watching and appreciating Wilson’s smile from afar.

“The answer to my prayer was sitting in the balcony with me for the last four years.”

Wilson knew no one could compare to his late wife, but also knew he had more love to give.

A few feet away at church, 68-year-old Lucinda Myers was shyly watching Wilson at the First Seventh-day Adventist Church in Huntsville, Alabama. She moved to Huntsville four months after Antoinette passed away. Myers divorced more than thirty years ago.

For months, the two never spoke to each other although they sat together in the church balcony. When Wilson would look at Myers she would avoid making eye contact.

“I didn’t want him to think that I was interested. I wanted him to be interested first,” explained Myers.

Eventually, the two finally spoke to each other. Myers realized she had an attraction, but the heat didn’t really turn up until the two interacted at a gathering at Murphy’s home.

“My heart was telling me, ‘You need to keep talking to this woman. I think I was hearing the Lord clearing his throat,” Murphy said as he cleared his throat. “That’s the one.”

The couple quickly fell in love in April. Just one month later, they were engaged, and by July, they were married. Myers had “never had a real wedding before,” but at age 67 she had found the love of her life.

He has a beautiful smile. I love him so much,” Myers said of Wilson. “He has such a calm demeanor about him. The Lord just put us together for a reason. We’re just so happy. I couldn’t have asked for a better mate.”

Murphy’s daughters arranged a photo-shoot from a professional photographer and the engagement photos almost broke the internet, going viral on social media. You can instantly see why.

The couple were like giddy teenagers falling in love. They planned a wedding date of July 29th in the same church where they met. On the big day, the wedding photographer captured the perfect moment and shared the results on Instagram.

“My celebrity clients☺️, Murphy and Lucinda, who proved it’s never too late to find love, have tied the knot!”

What God has for you, is for you!! It's official!!! My celebrity clients☺️, Murphy and Lucinda, who proved it's never too late to find love, have tied the knot! On Saturday, July 29, 70-year-old Murphy Wilson and 67-year-old Lucinda Myers exchanged vows and said "I do" at the very place where their love began, the First Seventh-day Adventist Church in Huntsville, Alabama. Congratulations to this beautiful and inspiring couple!!! To see more of their wedding day photos and read quotes from the couple about their big day, visit my blog. (Link is in my bio) #Godaintdoneyet #murphyandlucinda #nevertoolatecouple #giannasnellphotography #whatgodhasforyouisforyou #whatgodhasforyou

One particularly beautiful moment was captured when Murphy saw his bride walking down the aisle.

“When I saw her coming down the aisle, it took everything in me to hold it together. She looked so beautiful!” Murphy said.

"When I saw her coming down the aisle, I took everything in me to hold it together. She looked so beautiful!" – Murphy Wilson Photo #1 cred: @verneenorman #murphyandlucinda #giannasnellphotography

The two didn’t think they would find true love again, but now they know they have been blessed.

“I’ve been telling everybody that I have been blessed again,” shared Wilson. “I never thought God would give me another fantastic mate and he has. I just didn’t think it would happen again.”

Love can find you at any age, and when it does, it can instantly transform your world into a beautiful dream.

This couple proves it's never too late to fall in love