Age 6 Boy Gives Handmade Macaroni Necklace To Meghan Markle, Now Has Orders All Over The World 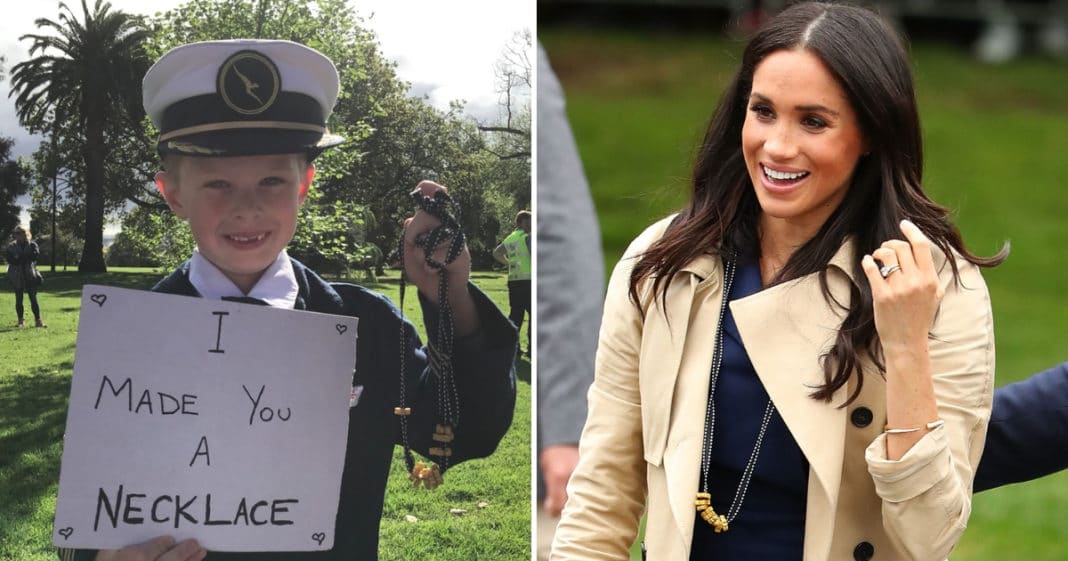 Gavin Hazlewood is a 6-year-old snappy dresser from Melbourne, Australia who has it all figured out. He’s started a charity website and has started his career as a royal jewelry designer after meeting the Duchess of Sussex, Meghan Markle recently.

His newfound career started when he begged his mum to stay home from school. Why? He wanted to meet his heroes: Meghan and her royal hubby, Prince Harry. Actually, he didn’t just want to meet them – he had a plan. Hazlewood wished to present the Duchess with one of his handmade macaroni necklaces. He creates his jewelry by dipping the dinosaur-shaped pasta into gold paint and then threads a nice pinstriped black ribbon through them. (With a little help from his mum.) 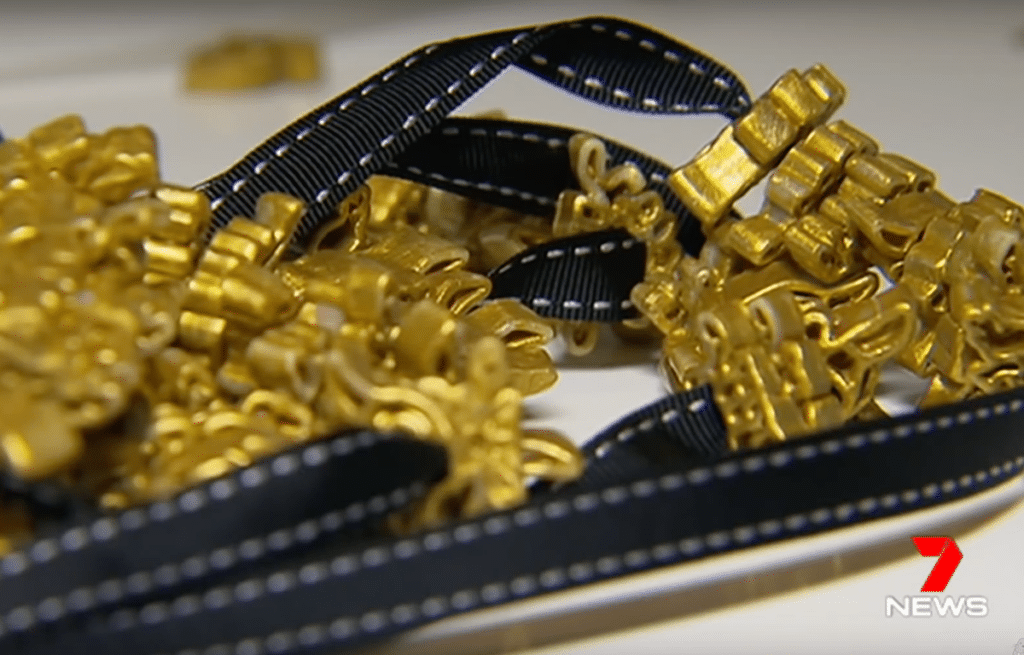 Well practically everyone wanted to meet the Royals on their first Royal Tour. If he wanted to get his chance, he knew he had to stand out in the crowd. So he made a sign that read:

“I Made You A Necklace.” 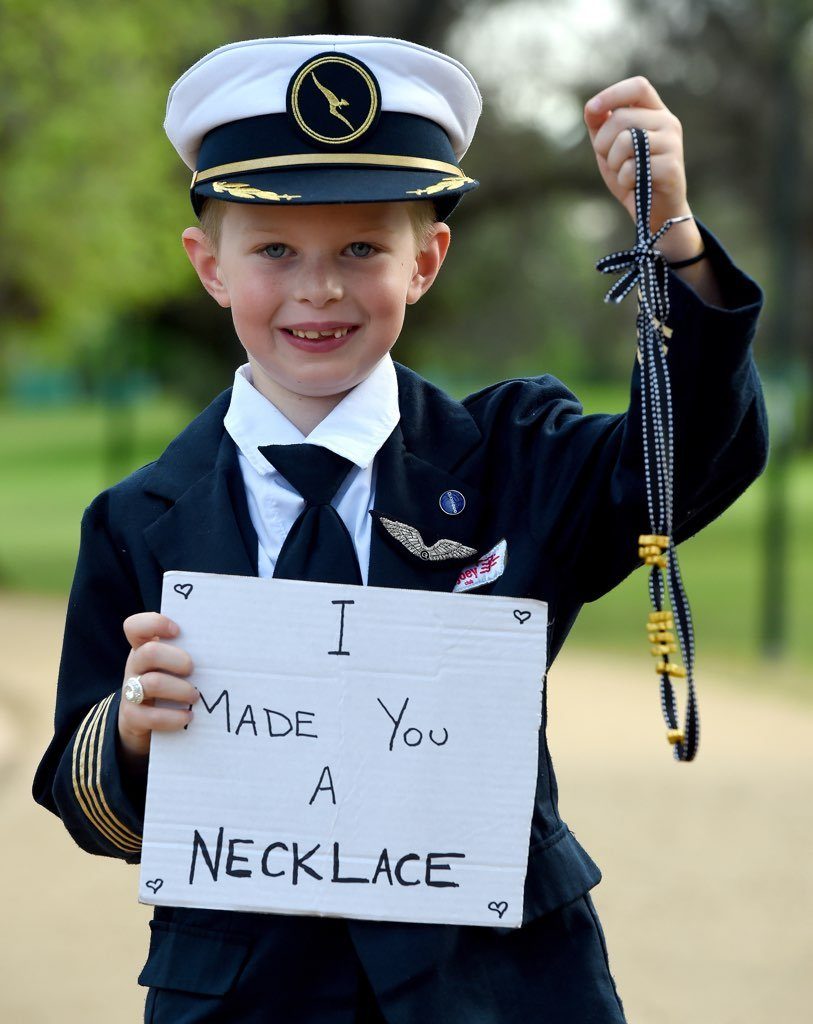 Gavin is ready for the Duchess via imadeyouanecklace.com

Simple but effective marketing, right? He also put on his favorite Australian pilot outfit for extra panache. Then he and his supportive mum headed out to see what would happen.

Finally, his moment came. There was the Duchess at last. She of course spotted Hazlewood in his pilot’s cap. Then she saw the sign and he was thrilled with the response.

“You made this?” asked Markle. “Thanks, Gavin!” 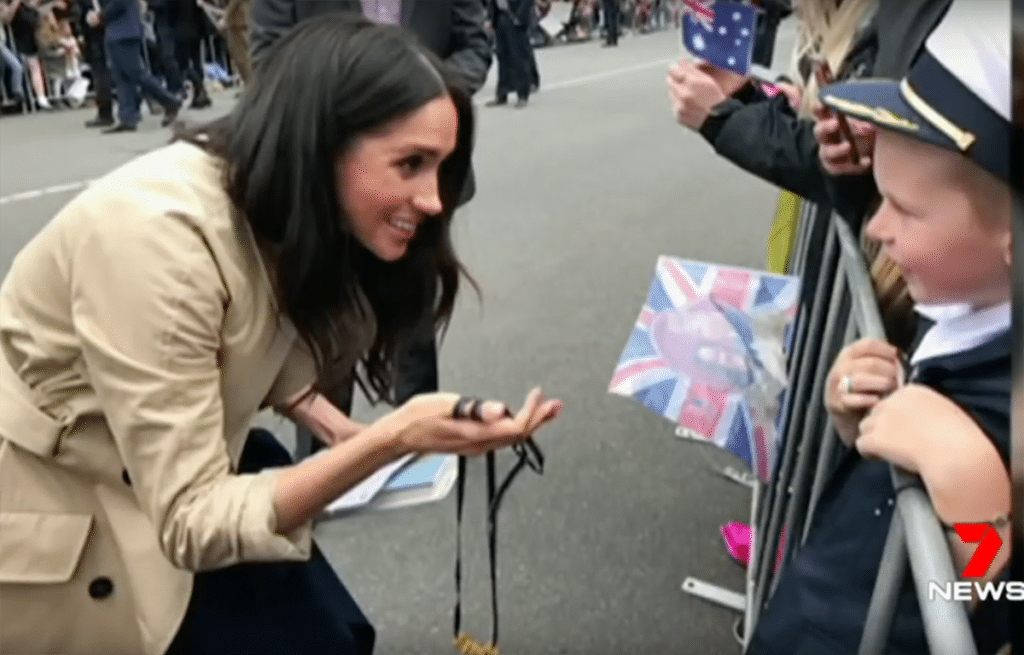 Not only did he get a personal thank you, but the Duchess immediately put on the necklace and wore it for good part of the day. The 6-year-old was an official royal fashion designer.

Having achieved his goal, he then unveiled the broader part of his ambitious plans.

“I want to be like the Prince and Princess and support charities. I made more necklaces the same as Meghan’s. If I sell them, I’ll send all the profits to research for stillborn babies. My sister, Clara, was stillborn in 2014 and I don’t want it to happen anymore.”

Prince Harry and Meghan’s charitable example inspired the young boy, and he now wants to raise money for a good cause that impacted his family. The Hazlewood family still makes a point to include Clara in their daily lives and don’t want other families to have to go through what they have.

Now his macaroni necklace business is taking off. Everyone wants the same one-of-a-kind jewelry worn by the Duchess, and by placing an order, you can also support a great cause.

The proceeds go to the Mercy Hospital and the University of Melbourne to fund research that can end preventable stillbirths like Gavin’s sister, Clara. The researchers are working to detect babies at risk so they can deliver them safely.

If you don’t fancy a Royal macaroni necklace (although how could you not?), you can also make donations at Gavin Hazlewood’s very professional-looking website. We have a feeling this bright kid is going to be incredibly busy making all of those macaroni necklaces to be delivered all over the world.

See more in the video from Australia below: