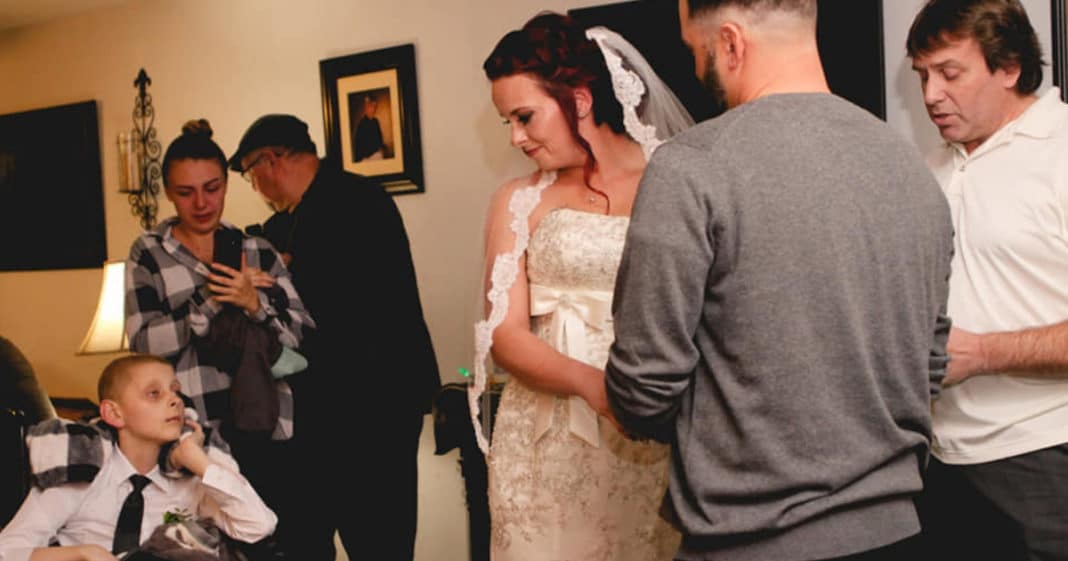 The story of 12-year-old Keith Burkett touched countless hearts around the world during his long battle with cancer in which he became known as “Kourageous Keith” by supporters and loved ones.

In 2010, Keith was put on hospice care after his diagnosis. He first made headlines after an early Christmas celebration and parade was thrown in his honor. And his community declared that October 21 would hence be known as Keith Burkett Day.

However, this year Keith asked his best friend, caretaker, and mom Taylore for one final wish:

“Mama, I would like to walk you down the aisle before I die.”

Although by this point, Taylore and Keith’s stepfather had already eloped, and the family could hardly afford another wedding financially, his mom was one hundred percent determined to fulfill her son’s dying wish.

Thanks to a flood of selfless donations, the family was able to surpass their $3,500 goal in just a few weeks and was able to put together a wedding at a local venue quickly.

However, time was running out as Keith’s health began to decline. Taylore knew that they would have to modify their current plans significantly if they were to make her son’s dream a reality. “We think he is holding out to go down the aisle with me,” she wrote on Facebook.

In this beautiful heart-warmer video, we watch Kourageous Keith (with the help of his wheelchair) realize his dream of walking his mother down the aisle, at an impromptu wedding thrown in the family’s living room.

Sadly, we learned three days later that Kourageous Keith past away.

“Today at 12:57pm Keith earned his angel wings and it’s now in heaven in peace to be with god,” his mom wrote on Facebook. “Mommy misses you so much already baby boy! You will always be with mommy! I don’t know how mommy is going to live without you! A piece of me will forever be gone. I promise you baby I’ll do my best! We love you so much baby!!”

Kourageous Keith’s short but beautiful life should serve as an inspiration and remind us of how true selfless love can transform the universe.