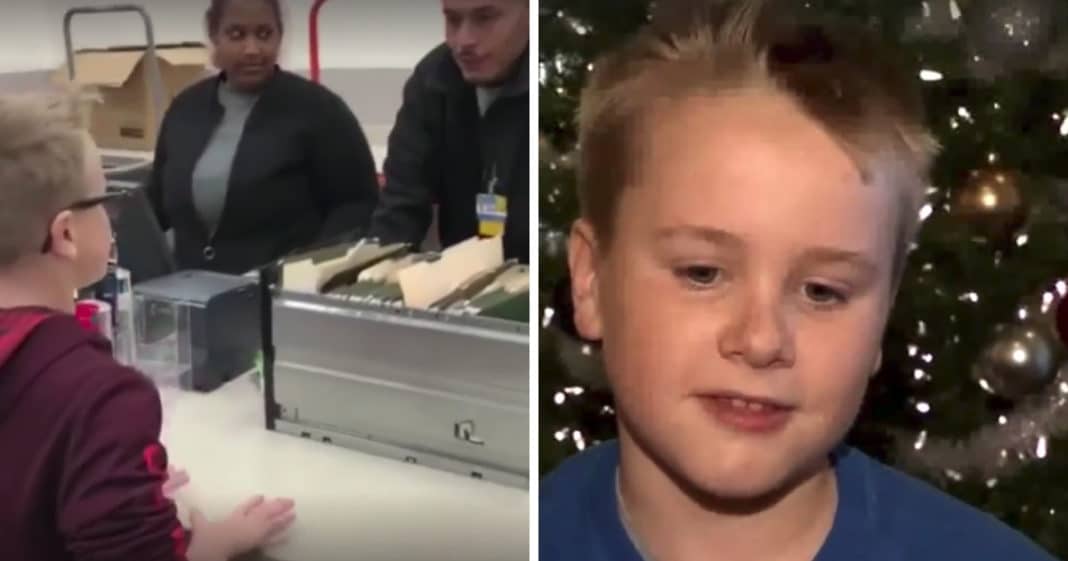 One of the most surprising and beautiful stories of Layaway Angels this year is that of an 11-year-old 6th-grade student from Ludlow, Massachusetts. Brady Procon surprised his parents by asking them if he could pay for other people’s Christmas presents this year at the Chicopee Walmart.

“Not a lot of kids are as fortunate as others, so I thought it would be nice to help a kid have Christmas,” he explained.

Procon pulled a receipt at random from the file of layaway items and received a list of toys that appeared to be gifts for a boy his age. He paid for an Xbox, a Playstation, and dinosaur walkie-talkies for a total of $327.27.

The Walmart employees remarked on how great it was to see something so selfless and generous. Now Procon hopes that his story will inspire other kids like himself to turn into Lawaway Angels for the holidays.

“I’m hoping that other kids would catch along with this… and sort of kick-off a trend,” the boy said.

A very special secret Santa paid for someone's layaway items at Walmart and his true identity is shocking – an 11-year-old boy, wise beyond his years ?❤️️ https://cbsn.ws/2KgHkJ1

One of the best parts of the holiday season is seeing how it brings out the generosity and kindness in people. This year, many Secret Santas, from celebrities to strangers, to kids, have hit the news after they decided to turn into “Layaway Angels,” paying off Christmas layaway items at Walmart stores.

With only a few days to Christmas, it’s unlikely that some of the shoppers would be able to come up with the funds to pay off their items, but now, they will take them home for free. It couldn’t come at a better time for people struggling this winter.

At the Walmart Supercenter in Pohatcong Township, New Jersey, an anonymous person paid off all the remaining layaway items at the store.

“This can’t be. Who can afford to pay for everyone’s layaway?” the woman asked.

“Santa Claus can,” he replied.

“I get goosebumps thinking that that is the true magic of Christmas,” Gates said later.

“That is the Christmas spirit walking amongst us.”

Tammy Desautels was struggling with finances, but when she showed up to pay for her layaway items, they were paid off.

“I really had a feeling that there’s hope for mankind,” she said.

“There’s still good people out there.”

They never knew who the mystery man was.

A celebrity Secret Santa, actor, playwright, filmmaker, and comedian Tyler Perry has inspired other stars like Kid Rock to join him in becoming Layaway Angels this year.

He shared a video on Instagram in which he says:

“I was trying to do this anonymously but oh well!!!”

“I know it’s hard times and a lot of people are struggling,” he said. “I’m just really, really grateful to be able to be in a situation to do this,” said Pery.

“So God bless you. Go get your stuff.”

Perry is known for giving generous gifts to people in his life. He once gave comedian and actress, Tiffany Haddish, a Tesla car, announcing it in a video of the car with a large red bow on it. They had just wrapped up filming for “Nobody’s Fool.”