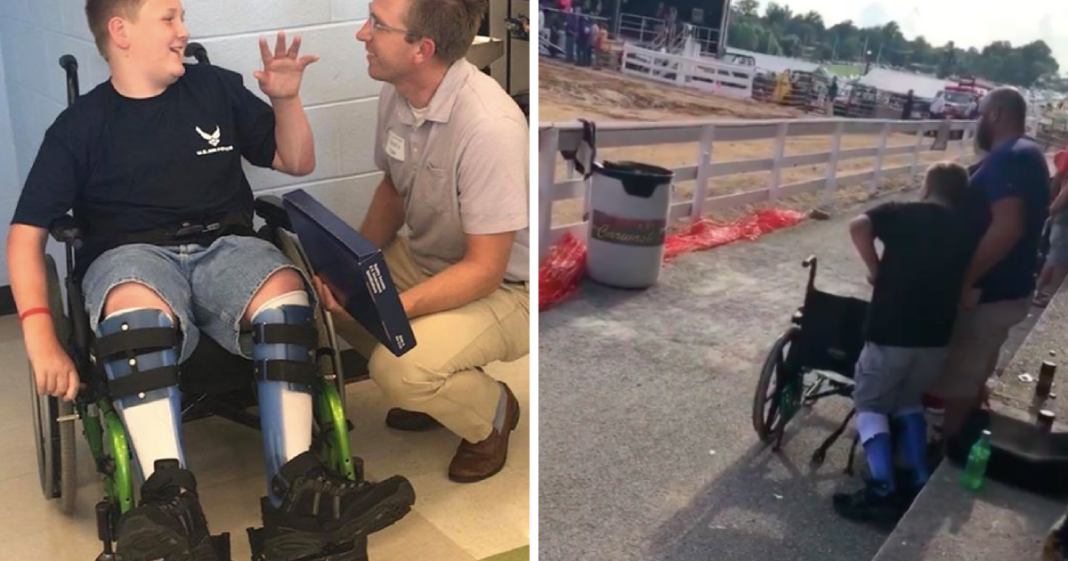 Avery Price, 10, stood for the National Anthem even though he uses a wheelchair. He was attending the Putnam County Fair in Tennessee with his father. Thanks to social media, his inspiring gesture has gone viral.

“One of the most touching things I’ve ever seen tonight!” Norris wrote. “This young man was struggling to stand for the anthem as he had braces on both legs with his Dad patting his back in support of helping him.”

Avery has a condition that makes it difficult for him to use his legs. “I usually sit and put my hand over my heart, but last night I just decided to stand,” Avery told Fox. “I like to stand for my country.”

One of the most touching things I’ve ever seen tonight! This young man was struggling to stand for the anthem as he had braces on both legs with his Dad patting his back in support of helping him. You may or may not agree and that’s your choice. Men and women have bled and died for us to be able to choose. They fought for everyone’s rights, not just the ones we may or may not agree with. I’m not sure who this boy or his family is, or if it’ll ever reach them again. But his parents are raising a fine young man.This video was not taken as a part of any protest or political view. It was taken because he knew men and women fought for his right to choose whether or not to stand. It was taken because he went above and beyond his disability to do what was his right as an American.

The 10-year-old has always been patriotic. His grandfather served in the Air Force. His dad says his old leg braces feature the red white and blue.

Many who commented online were quick to praise Avery and his parents. “Very proud to see him do that, makes me feel really good especially through the stuff he’s been through and he still wanted to do that, that’s amazing to me,” Stephen Price wrote.

Received several contacts today regarding this American Patriot, Avery Price. He told me this morning that his…

Avery has recently undergone surgery in Nashville. This has improved his mobility to an extent. “He doesn’t understand the impact he made,” Norris told the news station. “It’s not a protest of  anything, it’s more of our soldiers, and our men and women are fighting for our rights to do what we want and Avery done what he wanted, and he stood up for what he believed, and he stood up for his country.”