Man looks down at wife after 59 years of marriage, tells her ‘I know you can’t hear me, but I love you’ 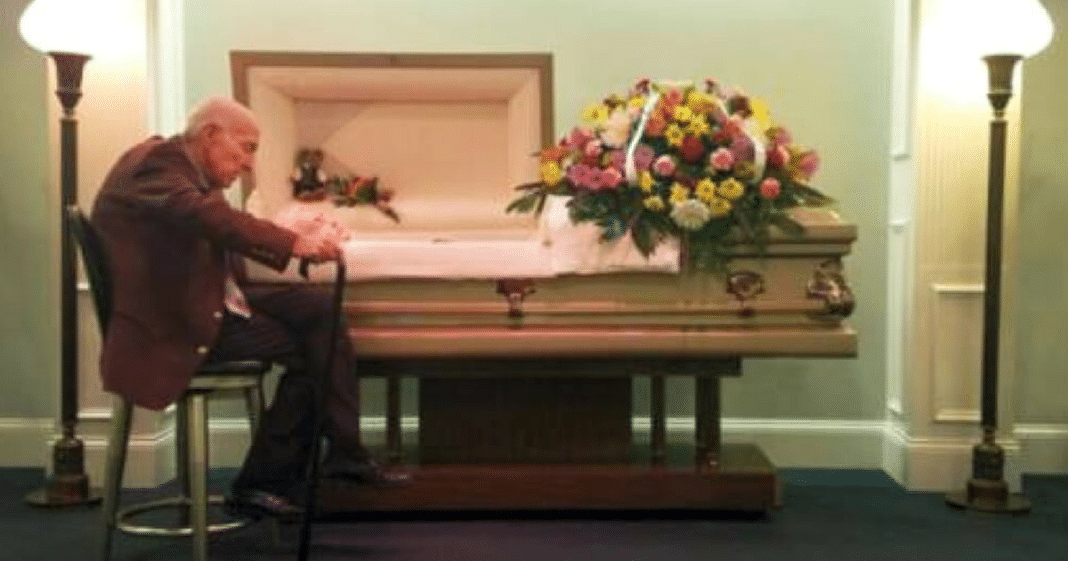 During our lives, experiencing grief and loss are unavoidable. During these challenging times, we sometimes find it hard to speak about them or even acknowledge our feelings. These losses can be so painful and cause such hurt, leaving us feeling so empty inside, it’s no wonder why some might push the grief deep down. It’s easier not to deal with emotions than facing them straight on.

Those who lose a partner or spouse know of this heartache all too well. The void left in their lives isn’t something that can ever be filled again. They can’t always move on but through their hurt. Bobby Moore knows what this is like because he lost his wife, Jerry after nearly 60 years of marriage.

Bobby’s family requested this post be written as a Facebook post. It was initially intended to be seen by one person, but the family decided to share it with the world. It’s been viewed and shared by people touched by the accompanying photo.

The photo and caption were shared by April Yurcevic Shepperd. She hopes it will inspire others. Everyone has suffered grief and loss; the touching post is relatable in some way to all who see it.

“Jerry Elaine Lawless Moore,78, of Columbia, passed away on January 7, 2018, leaving behind an enduring legacy as a devoted wife, mother, and businesswoman.

“Born in the family home to Forest Herbert Lawless and Jewell Corrine Loy on April 9, 1939, Jerry was raised in the Moore’s School House Community of Russell County. After graduating from Russell  County High School in 1957, she moved to Chicago with her cousin. It was there that she met her life partner, Bobby Joe Moore, also a Kentucky native from Adair County. The couple returned home and were married on May 30, 1958, in front of beloved family and friends. Shortly after, Jerry and  Bobby established a home in Adair County, where they were blessed with five children.

“In 1981, Jerry, along with her husband Bobby, began operating B&H Poolroom, located on the square next to the old Loy’s Department Store. Seven years later, in February 1988, Moore’s Poolroom was open next to the Columbiana Theater on the southwest side of the square. Thirty years later, this  Columbia institution stands as a tribute to Jerry, where the food is always tasty, the service always friendly, and the atmosphere always lively. With its smoky ambiance, clacking of billiards,  and the aroma of burgers and onions frying on the grill, Jerry was a constant, greeting guests with her hardy hello and welcoming smile.

“On a keyboard tucked behind the booths, it wasn’t uncommon to find Jerry tickling the ivories, or singing a tune with someone who plucked down one of the guitars hanging from the paneled walls.  Jerry was a self-taught pianist, who performed locally with her sisters Janet, Betty, Gladys, and  Debbie. The sister act made appearances at special events, singing standards and pop hits of the day. It never occurred to Jerry to be shy, and her personality shone from her singing to her wardrobe.

Jerry’s love of dancing was also evident at Moore’s. At any given time, she might be found dancing between the tables with friends and customers. Her favorite partner, however, was her husband  Bobby, whom she whirled through life with for over 60 years.

Jerry was a member of the Russell Heights Baptist Church.

Her adoring husband of 59 years, Bobby Joe Moore, survives to mourn her passing.

The post starts out painting a picture of Bobby Moore. “Today I saw a man, a broken man, standing vigil over his most prized possession. Here was love personified,” the post said.

“When he walked into the room,” it continued, “his steps were faulty, but his determination was undaunted. His eyes were fixed upon his destination at the front of the room. A steel grey casket sat under the colored lights.

Writer’s Note: At the request of the Bobby Moore and his family, I am sharing this narrative and photograph. This story…

“Half of its lid was propped open; the closed half held a spray of vivid, mix-matched flowers  adorned with ribbons which read the words ‘wife’ and ‘mother.’ Upon approaching and without pause,  he leaned down and kissed her painted lips, his frail body trembling to keep upright.”

Bobby and Jerry lived together for a lifetime. 60 years of love, fights and laughter. They overcame the bad times and basked in the glow of good days.

As family members arrived, he sat there, stroking his beloved’s hair, asking, “She looks good, doesn’t she?”

Bobby remained by Jerry’s side for five hours until exhaustion overtook him and he could sit no longer. The wake, or funeral or viewing, no matter what name you give it is the easy part. You have family and friends at your side to offer support and comfort. It’s after the burial when you’re loved one isn’t physically there when the grief can spill over. You have to wake up and put on your brave face for the world.

With the family’s permission, April shared the touching photo of Bobby honoring his wife at her casket. The power of grief is universal. Bobby’s pain is in ways linked to our own past sufferings.

To those in pain, I wish healing. Your loved one might have been taken from this world, but they’ll be with you forever. Talk about the bad times; laugh and cry; let your heart feel what it will. Smile as you remember them. They won’t be far from your side. They’re in your hearts and memories always.