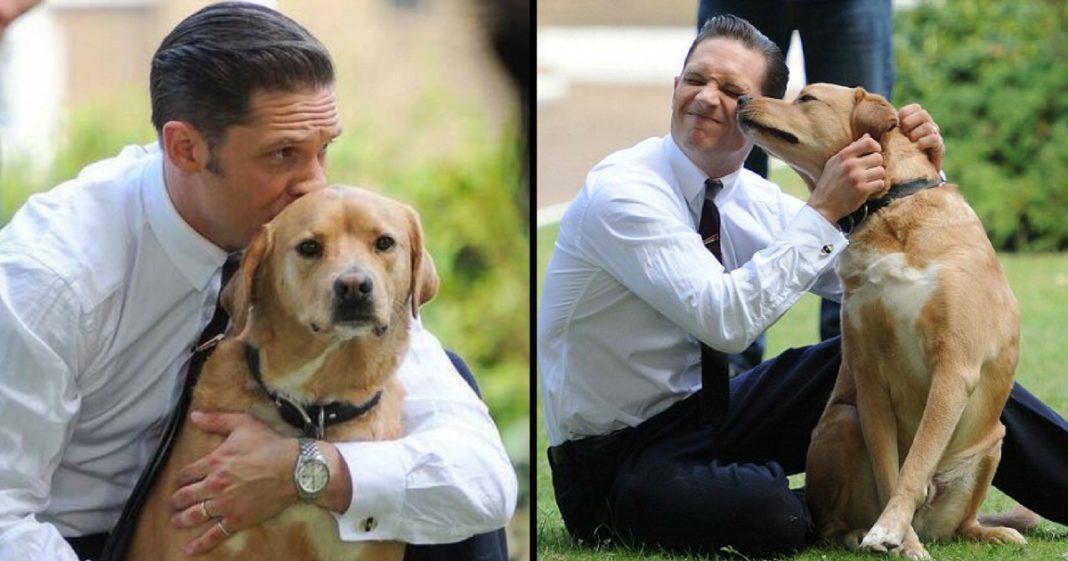 Anyone who has ever loved and lost a pet knows how devastating it is. Our pets come into our lives just long enough for us to grow irrevocably attached, and then they leave us all too soon. They become members of our family, and when they pass they take a piece of our hearts with them.

Actor Tom Hardy knows this all too well. Hardy, known for his roles in The Dark Knight Rises, Inception, and Mad Max: Fury Road, took to his blog to share about the passing of his beloved dog Woody, and his heartbreak is something so many of us can relate to.

He shared the unlikely story of the night he found the Labrador-mix when he was in Georgia filming the movie Lawless with actress Jessica Chastain. They were driving down the road late one night when they saw something run across the road.

They pulled over to see if they could help the poor animal – whatever it was – and when Hardy whistled, the 11-week-old puppy ran straight to him.

Though it was obvious the puppy had been through a lot in his short life, he was immediately at peace in Hardy’s arms, and the two quickly became “best friends.”

Hardy shared how Woody had also bonded with his wife, actress Charlotte Riley, and “guarded her fiercely” when she was pregnant.

Over the years, Woody has become a celebrity in his own right as Hardy has brought him on set many times, as well as to different photo shoots and movie premiers.

“[E]veryone who met him loved him,” Hardy wrote. “He didn’t have a bad bone in his body. All he knew was love.”

Sadly, Woody contracted polymyostisis, a muscle disorder, and after a “very hard and short 6 month battle,” the 6-year-old dog passed away.

“He was Far too young to leave us and We at home are devastated by his loss,” Hardy wrote. “I am ultimately grateful for his loyal companionship and love and it is of some great comfort that he is no longer suffering. Above all I am completely gutted. the world for me was a better place with him in it and by my side.”

Hardy finished his letter with a poignant message to his beloved friend:

“With all of me I love you. Always Thankyou for Your love beautiful boy.”

You can read Hardy’s heartbreaking letter in its entirety below:

I first saw Woodstock running across a turnpike we were turning onto late one dark night in Peachtree Georgia Atlanta. Whilst we were shooting Lawless. He was a stray. 11 weeks old. Oh No we thought. Quickly Go get that dog not even sure it was a dog. Actually.  We stopped the car. It was pitch black literally. I used my phone to light the road in case a car came round the turnpike and couldn’t see me. And malletted me. And I tried to cover some ground but he was fast.  I watched this thing Running towards the highway in the pitch black making good speed towards the cars and lorries and I remember seeing what were its floppy ears bouncing towards the traffic. That dogs had it I thought. I couldn’t make out how big it was what breed it was? Nothing  just those two ears flapping away above a frantic bundle. Hurtling away from us towards impending doom that was for certain. Whatever it was had no road sense and was tearing away. I panicked a little because I couldn’t help it had no name to shout and now it was close to the freeway. I put my fingers to my mouth and I whistled. Loud as I could. The whistle pierced the black. And It stopped the dog dead in its tracks. Then it turned and set eyes on me in one swift movement the ears about faced and the dog decided to run straight at me in the darkness all flashes of teeth and snarling And shrieking. Fuck this I thought that’s not a fkn dog. What am I doing. It ran straight at me and hit me around the legs I couldn’t see but I could hear the distress and I reached down thinking I’m going to get bitten. It was so noisy shrieking. I snatched out expecting to feel teeth and grabbed a fist full of soft neck fur lifted what was actually an incredibly light weight up to my face and shone my phone at it. It was a very small bundle literally sagging from its neck fur with two big brown eyes staring straight into mine. Terrified and utterly quiet. When I got back to the car and sat in my seat he lay on my shoulder and fell asleep. And snored clearly he’d been through a lot. And now the ordeal was seemingly over enough for him to relax. Jessica asked me was he a girl or a boy. Its a boy I said. How do you know. Erm… I can feel his Woodstock. great !!! let’s call him Woodstock!!! And so it was. He was covered in dogshit. Now so was I. And we rode and We took him straight to the pet store to clean him up and buy him well things.., lots of things things dogs need and we walked the aisles the three of us letting him
Choose toys and his lead and his collar. I’ll
Never forget that night. It was wonderful. One minute he was almost dead next terrified. Then picked up by strangers then after He had a power nap in the car, the next he’s walking with his bandy leg John Wayne strut under the strip lighted aisles of this massive pet store happy and playful.
He wore a red bandana that night and from then on and drank religiously from the toilet throughout the night despite having a few bowls of water in the apartment he was every inch a survivor.  He wasnt house broken it didn’t matter we were outdoors mostly and He ate through trailer doors and made many friends and Pnut had him on the lead off set and He became our onset dog  I will always be eternally grateful to Georgia. It gave me the greatest of joys of being a dog owner  And the bestest of friends after Max had passed Woody arrived He was 11 weeks old approx. The first morning we had him. He ate a turd and we chased him to drop it but he gobbled it down because he must have thought we wanted to eat it. So he ate it as fast as he could. We just wanted him to eat some real food. He now had plenty. But there was a survivor in him. That was clear he had had to eat what he could and from then on it was clear he had food issues. But he would never go hungry again. His nickname was Yamaduki. Because he literally yammed down a duki. So Woodstock Yamaduki was his full name. Woody Thomas later Woody two shoes and Wu for short.

Woody came back to the Uk after Jess’s parents kindly looked after him to avoid quarantine they house trained him. He had my tshirt from Warrior. I picked him up from them in California when I shot Dark Knight and thanked them. He hadn’t forgotten me and despite the tireless efforts and hard work that Jessica’s Mum and husband had put into Woody he heard my whistle again and turned and ran at me and didn’t look back. I felt for them but secretly I was very happy that my friend and I were reconnected.  We all had a picnic we jumped into a lake Woody too and then it was clear Woody couldn’t swim and I hauled his ass out of the lake. Dragging him out the shit a second time cemented a pattern. I have hauled him out of rivers and ponds on many occasion since that day such was his love to chase ducks. Especially the Thames.
his rabies titer had cleared he spent a week in quarantine and he became a Londoner.

He was an Angel. And he was my best friend. We went through so much together.
Charlotte worked tirelessly with him to get him through a rough case of separation anxiety. He loved her like his Mum. And when she was pregnant he gaurded her fiercely.

He has been on many sets. Met many crews. Photo shoots premieres made many many friends he was #73 most influential animal in TIME magazine. He beat JAWS. Something we all thought was brilliant. He’s been in peaky blinders. Legend everyone who met him loved him. He didn’t have a bad bone in his body. All he knew was love.

I don’t normally speak out about family and friends but this is an unusual circumstance. Woody affected so many people in his own right so with great respect to his autonomy and as a familiar friendly face to many of you, it is with great great sadness a heavy heart that I inform you that after a very hard and short 6 month battle with an aggressive polymyostisis Woody passed away, two days ago. He was only Age 6. He was Far too young to leave us and We at home are devastated by his loss I am ultimately grateful for his loyal companionship and love and it is of some great comfort that he is no longer suffering. Above all I am completely gutted. the world for me was a better place with him in it and by my side.
To the bestest friend ever. To me and to a family who loved him beyond words and whom he loved without doubt more than I have ever known. Woody was the bestest of journey companions we ever could dream of having. Our souls intertwined forever.

A friend told me

He was special bro, a shining example of man’s best friend. He burnt very very bright and, those that burn very bright sometimes burn half as long.

Were you touched by Hardy’s sweet letter? So share this!